Coastal Forces of the Royal Navy

Coastal Forces was a division of the Royal Navy established during World War II under the command of Rear Admiral Coastal Forces.[1] 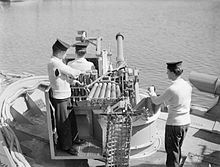 The first Headquarters was set up at HMS Vernon in 1940. The Chief Staff Officer to the Admiral was Augustus Agar VC who had commanded Coastal Motor Boats during the First World War and British operations in the Baltic in support of the White Russian forces.

The last sailors to wear the 'HM Coastal Forces' cap tally were the ships companies of HMS Dittisham and HMS Flintham on being taken out of reserve in 1968, before individual cap tallies for these inshore minesweepers had been manufactured and issued.

It included the following types of coastal defence craft:[3]

At the outbreak of war there were three flotillas of Motor Torpedo "short boats" between 60 ft (18 m) and 72 feet (22 m) long. These could typically maintain 40 knots and were armed with two torpedo tubes. They were built mainly by the British Power Boat Company, Vospers and Thornycroft.

In 1940 a modified craft, the Motor Gun Boat, was introduced. These were armed with weapons such as the 0.5 in Vickers machine gun, 2 pounder "pom pom", a single or twin 20 mm Oerlikon and ultimately the autoloader fitted 6-pounder gun.[5]

It was also apparent that larger craft were needed as the operational capability of the short boats was too restricted by sea conditions. Fairmile designed a series of larger coastal craft, up to 120 feet (37 m) long. The Fairmile A Type and B Type were Motor Launches and the C Type was a Motor Gun Boat.[6]

In 1943 the Fairmile D Type appeared. It was a motor torpedo boat – nicknamed the Dog Boat – and was designed as a counter to the German E-boat. It could be fitted as either a gun or a torpedo boat, so the designation MGB disappeared and all the craft were labelled MTBs. It was a good sea boat and could maintain 30 knots (56 km/h) at full load. The later D types carried four 18-inch (460 mm) torpedo tubes.[7]

British "Coastal craft operated mainly in the English Channel and North Sea waters, especially in the build up to the Normandy invasion of 1944. They were also used in the Mediterranean and Norwegian campaigns." They raided St Nazaire and Dieppe. They were used to attack German convoys and their E-Boat escorts, "carry out clandestine raids and landings and pick up secret agents in Norway and Brittany." "The coastal craft were manned by various Allied nationalities including Dutch, Norwegian, Canadian, Australian and New Zealanders."[8]

By 1944 Coastal Forces numbered 3,000 officers and 22,000 ratings. Altogether there were 2,000 British Coastal Forces craft. Affectionately known as the Navy's "Little Ships", they fought over 900 actions and sank around 400 enemy vessels, including 48 E-boats and 32 midget submarines. They fired 1169 torpedoes, shot down 32 enemy aircraft and carried out many mine laying operations. 170 of the "Little Ships" were sunk or destroyed.[11]

The Coastal Forces bases were around the British coast and at major locations overseas.[12][13][14][15]

Some surviving motor launches in British waters were taken on as pleasure boats and a number of them are on the National Register of Historic Vessels.