for the civilian airport established in 1946, see Childress Municipal Airport

Childress Army Airfield is a former World War II military airfield, located 4.8 miles west of Childress, Texas. It operated as a Bombardier training school for the United States Army Air Forces from 1942 until 1945.

Childress Army Airfield was initially authorized on 2 May 1942 and occupied an area of 2,474 acres. Construction of the field began immediately thereafter. An activation ceremony was held on 27 October 1942, and Col. John W. White assumed command on 24 November. The base was assigned to the Army Air Forces Central Flying Training Command. [1][2]

The initial mission of Childress AAF was bombardier training and was one of the "West Texas Bombardier Quadrangle" schools of the Army Air Forces Training Command. The other bases in the quad were Midland Army Airfield, San Angelo Army Airfield and Big Spring Army Airfield.

Training was performed with the Beechcraft AT-11 Kansan. In addition, navigation training was added on 4 June 1943. Units assigned to the base were:[3]

The Bombardier School opened and accepted its first class of cadets began training in late February 1943 and graduated in May. Members of this class (43-7) were dubbed the "Valentine of Steel" class, in reference to a dummy bomb that Mrs. White decorated as a Valentine to Hitler. Subsequent classes arrived at three-week intervals through the rest of the war and participated in an initial training program of eighteen weeks, later increased to twenty-four. Those who completed the work were designated flight officers or commissioned as second lieutenants.[3][4]

The base produced the first classes qualified in both precision bombing and dead-reckoning navigation. In 3 1/2 years Childress AAF graduated thirty-five classes of bombardier-navigators; its 4,791 graduates made a tenth of the total World War II air force bombardier production.[1][4]

The first "All-American Precision Bombing Olympics" was held at Childress in May 1943 with seven air fields participating. Such meets were held there and at other training bases at three-week intervals thereafter until April 1944. A special practice feature was skip-bombing on Lake Childress. A redeployment program for veteran bombardiers was instituted at the field to give retraining in line with development of bombing techniques.[5]

The War Department also established a prisoner of war camp at the base. Childress was renamed the 2512th Army Air Forces Base Unit on July 1, 1944.[5] 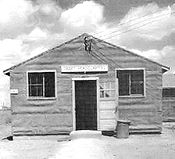 After the field was closed on December 21, 1945, it was given to the city and transformed into a municipal airport. Childress Municipal Airport is a commercial airport located within city limits, 4 miles west of central Childress, Texas. It is owned and operated by the city of Childress, Texas. A feature item of the CAAF museum exhibit is the Norden Bombsite, the great secret weapon of WWII, which was housed at CAAF during the war and was used to train bombardier pilots. It was stored in a vault in a small building which still stands (although in ruin) at the site of the airfield.[4][5]