So far, only the PAF has signed a contract making it the only export contract for the J-10.[8][9]

The program was authorized by Deng Xiaoping who allocated ¥ 0.5 billion to develop an indigenous aircraft. Work on Project #10[1] started several years later in January 1988,[10] as a response to the Mikoyan MiG-29 and Sukhoi Su-27 then being introduced by the USSR. Development was delegated to the 611th Institute, also known as the Chengdu Aircraft Design Institute and Song Wencong was nominated as the chief designer, he had previously been the chief designer of the J-7III. The aircraft was initially designed as a specialized fighter, but later became a multirole aircraft capable of both air to air combat and ground attack missions.

The J-10 was officially unveiled by the Chinese government in January 2007, when photographs were published by Xinhua News Agency. The aircraft's existence was known long before the announcement, although concrete details remained scarce due to secrecy. A J-10 prototype was speculated to have crashed during flight test.[11] In the official announcement Xinhua News Agency and the PLA Daily denied such rumors, and listed this as one of the test pilots' accomplishments.[12]

AVIC plans to market an upgraded J-10 for export, most likely the J-10B, once development is complete. Several countries have shown an interest in the type.[14]

The J-10 bears some resemblance to the Dassault Rafale, the Saab JAS 39 Gripen, and the Eurofighter Typhoon, in addition to the Mikoyan-Gurevich Ye-8, the Chengdu J-9 and the Israeli IAI Lavi.[15] Lavi is popularly described as having most similar canard-configuration to the J-10.[16] News articles have claimed that some of the Lavi's technology had been sold to China by the Israelis, an allegation denied by both China and Israel.[17][18] The general designer Song Wencong said that J-10 was a development of the indigenous J-9 which preceded the Lavi.[19][20] This was echoed by a PLAAF's major Zhang Weigang in a 2012 interview.[21]

In 2006, the Russian Siberian Aeronautical Research Institute (SibNIA) confirmed its participation in the J-10 program; SibNIA claimed to have only observed and instructed as "scientific guides", while its engineers also believed the J-10 was not only based on the Lavi, but also incorporated significant foreign technology and expertise.[22][not in citation given]

The first aircraft were delivered to the 13th Test Regiment on 23 February 2003. The aircraft was declared 'operational' in December of the same year, after 18 years in development.[1][15] The first operational regiment was the 131st Regiment of the 44th Division.

In July 2011, Daily Jang reported that China will give a squadron of the advanced J-10B fighter aircraft to Pakistan. According to the report,"the offer was made by senior Chinese military leaders to visiting Pakistan Army's Chief of General Staff, Lt Gen Waheed Arshad".[27][28] In March 2012, talks were held between the two countries to discuss the delivery of latest J-10B fighter jets to Pakistan.[29]

The airframe is constructed from metal alloys and composite materials for high strength and low weight, the airframe's aerodynamic layout adopts a "tail-less canard delta" wing configuration. A large delta wing is mid-mounted towards the rear of the fuselage, while a pair of canards (or foreplanes) are mounted higher up and towards the front of the fuselage, behind and below the cockpit. This configuration provides very high agility, especially at low speeds, and also reduces stall speed, allowing for a lower airspeed during instrument approaches. A large vertical tail is present on top of the fuselage and small ventral fins underneath the fuselage provide further stability.[citation needed]

A rectangular air intake is located underneath the fuselage, providing the air supply to the engine. Also under the fuselage and wings are 11 hardpoints, used for carrying various types of weaponry and drop-tanks containing extra fuel.[citation needed]

The retractable undercarriage comprises a steerable pair of nose-wheels underneath the air intake and two main gear wheels towards the rear of the fuselage.[citation needed]

The cockpit is covered by a two-piece bubble canopy providing 360 degrees of visual coverage for the pilot. The canopy lifts upwards to permit cockpit entry and exit. The Controls take the form of a conventional centre stick and a throttle stick located to the left of the pilot. These also incorporate "hands on throttle and stick" (HOTAS) controls.[citation needed] A zero-zero ejection seat is provided for the pilot, permitting safe ejection in an emergency even at zero altitude and zero speed.[citation needed]

Due to the J-10's aerodynamically unstable design, a digital quadruplex-redundant fly-by-wire (FBW) flight control system (FCS) aids the pilot in flying the aircraft. The FCS typically monitors pilot control inputs, (similar in purpose to a high performance vehicle equipped with electronic stability control) preventing the pilot from accidentally exiting the flight envelope from applying too much control input during high performance flight situations.[citation needed] This is critical in canard wing aircraft, as they are capable of turning in a much tighter radius than conventional aircraft. The massive control surfaces are capable of moving so far that they can completely destroy the aircraft in flight at high airspeeds if not kept in check by the FCS.[citation needed]

At the 7th Zhuhai Airshow held in 2008, the original test pilot of J-10 program, Senior Colonel Lei Qiang (雷强) revealed to the public that due to the good aerodynamic design, J-10 is superior than Sukhoi Su-27 when performing Pugachev's Cobra, the maneuver Su-27 is most famous for. The reason for J-10 superior performance was because for Su-27, Pugachev's Cobra maneuver is depended on the speed, which limits the angle of attack it can pull, the slower the speed, the smaller the angle of attack. Pugachev's Cobra performed by J-10, on the other hand, was controlled by the pilot, who can achieve any angle of attack he/she wants (Note:this is impossible. AOA is determined by aerodynamics not control), thanks to FBW FCS, which also set the maximum limit to prevent airframe damage due to the high g-force or for the pilot to lose consciousness at high speed.[30]

The cockpit had three liquid crystal (LCD) Multi-function displays (MFD) along with a Chinese developed holographic head-up display (HUD), all of which are fully compatible with a domestic Chinese advanced helmet mounted sight (HMS), claimed by Chinese to be superior than the HMS on Sukhoi Su-27 sold to China.[31][32]

According to Chengdu Aircraft Industry Corporation officials the J-10 uses a multi-mode fire-control radar designed in China. The radar has a mechanically scanned planar array antenna and is capable of tracking 10 targets. Of the 10 targets tracked, 2 can be engaged simultaneously with semi-active radar homing missiles or 4 can be engaged with active radar homing missiles.[33]

The radar is believed to be designed by the Nanjing Research Institute of Electronic Technology (NRIET), designated KLJ-10 and a smaller variant is claimed to be installed on the JF-17 light-weight fighter.[34] Believed to be based on technologies from Russia, Israel or a combination of both, the radar should be comparable to Western fighter radar designs of the 1990s. It may also be replaced by more advanced radars of other origin on export versions of the J-10. The Italian FIAR (now SELEX Galileo) Grifo 2000/16, has been offered to the Pakistan Air Force for installation on the J-10, should the PAF induct the aircraft.[33]

For J-10B, the nose cone is modified to accommodate an active phased array airborne radar (AESA) radar.[35][36] The general designer of AESA for J-10B is Mr. Zhang Kunhui (张昆辉, 1963 -), the head of 607 Research Institute in Neijiang, Sichuan. Mr. Zhang Kunhui became the deputy head of 607th Research Institute in 1997, and four years later in 2001, he became the head of the institute, when the AESA program for J-10B started. The primary contractor of this AESA is the Radar and Electronic Equipment Research Academy of Aviation Industry Corporation of China located in Sichuan, formed in March 2004 by combining the 607th Research Institute and 171st Factory together with Mr. Zhang Kunhui was named as the head of the research academy. According to Chinese governmental media, the AESA for J-10B took 8 years to develop, finally completed in 2008, and Chinese fighter radars hence achieved a quantum leap in that it went from mechanically scanned planar slotted array directly into AESA, skipping the passive phased array PESA radar.[37] Many suspected the radar is a PESA, but during its brief debuts in the 7th China International Defense Electronics Exhibition (CIDEX) in May 2010 and the 6th International Conference on Radar held in Beijing in Sept 2011, Chinese official sources have claimed it is an AESA.[38]

The J-10A is powered by a single Russian Lyulka-Saturn AL-31FN turbofan engine giving a maximum static power output of 12,500 kgf.[39] The AL-31FN is based on the AL-31F which was designed for a twin engine aircraft such as the Su-27, to fit the smaller J-10 the engine parts have been moved and re-designed to fit the smaller engine bay in the J-10.

The J-10 was intended to be powered by the Chinese WS-10 Taihang turbofan, but development difficulties forced the J-10A to use a Russian engine instead.[40] The J-10B is likely equipped with the improved WS-10A.[41]

The aircraft's internal armament consists of a 23 mm twin-barrel cannon, located underneath the port side of the intake. Other weaponry and equipment is mounted externally on 11 hardpoints, to which 6,000 kg (13,228 lb)[43] of either missiles and bombs, drop-tanks containing fuel, or other equipment such as avionics pods can be attached.

There have been four known crashes of the J-10 to date. The first crash is speculated to have been a prototype during testing in 1998 with the most likely cause cited as failure of the fly-by-wire flight control system.[11] However, China has denied such occurrence with official announcement.[12] 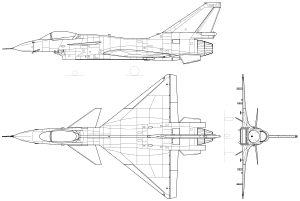