The Chassepot, officially known as Fusil modèle 1866, was a bolt action military breechloading rifle, famous as the arm of the French forces in the Franco-Prussian War of 1870-1871. It replaced an assortment of Minié muzzleloading rifles many of which were converted in 1867 to breech loading (the Tabatière rifles). A great improvement to existing military rifles in 1866, the Chassepot marked the commencement of the era of modern bolt action, breech-loading, military rifles. Beginning in 1874, the rifle was easily converted to fire metallic cartridges (under the name of Gras rifle), a step which would have been impossible to achieve with the Dreyse needle rifle.[2]

The Chassepot was named after its inventor, Antoine Alphonse Chassepot (1833–1905), who, from 1857 onwards, had constructed various experimental forms of breechloaders, and the rifle which became the French service weapon in 1866. In the following year it made its first appearance on the battlefield at Mentana on 3 November 1867, where it inflicted severe losses upon Giuseppe Garibaldi's troops. It was reported at the French Parliament that "Les Chassepots ont fait merveille!", or loosely translated: "The Chassepots have done wonderfully!" The heavy cylindrical lead bullets fired at high velocity by the Chassepot rifle inflicted wounds that were even worse than those of the earlier Minié rifle.

In the Franco-Prussian War (1870–1871) it proved greatly superior to the German Dreyse needle gun, outranging it by 2 to 1. Although it was a smaller caliber (11 mm vs. 15.4 for the Dreyse), the chassepot ammunition had more gunpowder and thus higher muzzle velocity (by 33% over the Dreyse), resulting in a flatter trajectory and a longer range, which was 1,200 yards (1,100 m). The Chassepots were responsible for most of the Prussian and other German casualties during the conflict.

The breech was closed by a bolt similar to those of more modern rifles to follow. Amongst the technical features of interest introduced in 1866 on the Chassepot rifle was the method of obturation of the bolt by a segmented rubber ring which expanded under gas pressure and thus sealed the breech when the shot was fired. This simple yet effective technology was successfully adapted to artillery in 1877 by Colonel de Bange, who invented grease-impregnated asbestos pads to seal the breech of his new cannons (the De Bange system).

The Chassepot used a combustible paper cartridge holding an 11mm (.43 inch) round-headed cylindrical lead bullet that was wax paper patched. An inverted standard percussion cap was at the rear of the paper cartridge and hidden inside. It was fired by the Chassepot's needle (a sharply pointed firing pin) upon pressing the trigger.

While the Chassepot's ballistic performance and firing rates were excellent for the time, burnt paper residues as well as black powder fouling accumulated in the chamber and bolt mechanism after continuous firing. Also, the bolt's shielded rubber ring eroded in action, although it was easily replaced in the field by infantrymen. The older Dreyse needle gun and its cartridge had been deliberately constructed in a way to minimize those problems but to the detriment of its ballistic properties.

In order to correct this problem the Chassepot was replaced in 1874 by the Gras rifle which used a centerfire drawn brass metallic cartridge. Otherwise, the Gras rifle was basically identical in outward appearance to the Chassepot rifle. Virtually all rifles of the older Chassepot model (Mle 1866) remaining in store were eventually converted to take the 11mm Gras metallic cartridge ammunition (fusil Modèle 1866/74). About 150,000 Chassepot rifles had been captured by the German coalition that defeated France in 1871. Large numbers of these captured Chassepot rifles were converted to 11 mm Mauser metallic cartridge and shortened to carbine size in order to serve with German cavalry and artillery until the early 1880s. Others were disposed of "as is" with British surplus dealers. In most cases, the French receiver markings on these German-captured Chassepot rifles were erased. 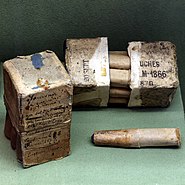 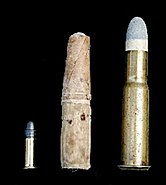 1867 newspaper illustration including a cross-section