General Charles Hartwell Bonesteel III (September 26, 1909 – October 13, 1977) was an American military commander, the son of Major General Charles Hartwell Bonesteel, Jr. and grandson of Major Charles R. Bonesteel, Sr. (1851-1902). He served in the United States Army during World War II, the Korean War and the Vietnam War. In the 1960s, he served for a time as commander United States Forces Korea during the Korean DMZ Conflict (1966-1969).

Bonesteel was born on September 26, 1909, in New York City. As a teenager, he was an Eagle Scout and was awarded the Distinguished Eagle Scout Award by the Boy Scouts of America.[1]

General Bonesteel distinguishing "eyepatch", the result of surgery for a detached retina.[2] 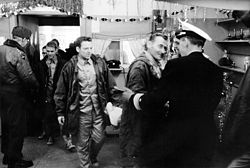 A 1931 graduate of the United States Military Academy, at West Point Bonesteel received the lifelong nickname of "Tick." After graduation, he was a Rhodes Scholar at the University of Oxford.[3][4]

After carrying out a series of command and staff assignments, he served in the United States and Europe during World War II in a number of senior positions. With the surrender of Japan imminent, Bonesteel, General George A. Lincoln, and Colonel Dean Rusk of the Strategy Policy Committee at the Pentagon were tasked with drawing up General Order No. 1 to define the areas of responsibility for US, Soviet and Chinese forces. On August 10, 1945, with Soviet forces already moving through Manchuria into northern Korea, Bonesteel proposed the 38th parallel as the Division of Korea. The draft General Order was cabled to the Soviets on 15 August and accepted by them the following day.[5] In the postwar era, Bonesteel served as special assistant to the Secretary of State. In November 1958, in an official capacity, he visited the city of Saigon, Republic of Vietnam (South Vietnam). He also served as commanding general of the 24th Infantry Division (1961–1962), and commanding general of the VII Corps (1962–1963). Bonesteel served as the Commander of United States Forces Korea (and Commander-in-Chief, United Nations Command Korea; Commanding General, Eighth Army) from 1966 to 1969. During this period he defended against North Korean infiltration during the Korean DMZ Conflict (1966-1969) and dealt with tensions arising from the January, 1968 Pueblo Incident.

While in the service of the Army, Bonesteel was awarded the Distinguished Service Medal twice and the Legion of Merit twice. He retired in 1969.

Bonesteel died on October 13, 1977, and is buried in Arlington National Cemetery near his father and grandfather.