During the Cold War, Chambley-Bussières was a front-line base for the United States Air Forces in Europe (USAFE).

The first use of Chambley-Bussières as an airfield was in 1940, when the French Armée de l'Air stationed 9 Potez 631 fighters and 5 Mureaux 117 observation aircraft on farmland. The aircraft were assigned to the GAO 2/506.

After the Battle of France ended in May, 1940, Chambley-Bussieres was abandoned as an air base and returned to agricultural use.

In 1951 as a result of the Cold War threat of the Soviet Union, Chambley-Bussières was provided to NATO for use by the United States Air Force. Construction of the base on former farmland started in 1952, although construction delays prevented the facility from being ready for wing operations until mid-1955.

On 30 January 1953 during the initial construction period, the 73rd Air Depot Wing at Châteauroux-Déols Air Base sent a small team to establish Flight A, 73rd Support Group Depot, Chambley. This flight was sent to receive, store and issue USAF supplies as needed by Air Force personnel and French contractors. This team lived near the main train station in Metz on the local economy and insured at least one USAF airman was always present on the new base to provide site security.

The design of the airfield was to space parked aircraft as far apart as possible by the construction of a circular marguerite system of hardstands that could be revetted later with earth for added protection. Typically the marguerite consisted of fifteen to eighteen hardstands around a large central hangar. Each hardstand held one or two aircraft, and allowed the planes to be spaced approximately 150 feet (50 m) apart. Each squadron was assigned to a separate hangar/hardstand complex. This construction can be seen clearly in the satellite image link at the bottom of this article.

Enough construction was completed by February 1954 that USAFE established the 7002d Air Base Squadron at Chambley to coordinate the set-up of various facilities, such as security, supply, transportation and communications.

Chambley Air Base was formally dedicated and turned over to the USAF on 12 June 1956.

The first USAF unit to use Chambley AB was the 21st Fighter-Bomber Wing, being transferred from George AFB, California. The wing’s deployment to France had to be carried out in stages. Four echelons of wing personnel variously traveled by train, ship, and air to reach Chambley between November 1954 and January 1955. The 21 FBW officially established its headquarters at Chambley on 12 December 1954.

The 21 FBW consisted of three squadrons, the 72d, 416th and 531st Fighter-Bomber Squadrons, equipped with the F-86F "Sabre". Upon their arrival, the facilities at Chambley were not ready for aircraft use, and the squadrons had to deploy elsewhere. The 72d deployed to Châteauroux AB, while the 416th and 531st operated out of Toul-Rosières AB.

After many construction delays, the wing combined its fighter squadrons at Chambley on 15 April 1955. The squadrons carried out close air support training missions with the Army, then took first place at the United States Air Forces in Europe (USAFE) "Gunnery Meet" at Wheelus Air Base, Libya.

The 21 FBW participated in the Atomic Warfare exercise "Carte Blanche," and went on to take an overall second place in the Nellis AFB, Nevada "Gunnery Meet" in 1956. Moreover, they won the USAFE "Award for Tactical Proficiency" for the January–June period of 1957.

During October 1957 it was announced that the 21 FBW would be inactivated on 8 February 1958, and that its assets would be dispersed among existing USAFE units. With the departure of the wing, Chambley-Bussières AB was placed in reserve status. The 21st Fighter Wing was reactivated at Misawa AB, Japan a few months later on 1 July 1958, inheriting the lineage of the 21st FBW.

After three years without any permanent flying units, in 1961 Chambley Air Base was reactivated as part of Operation Tack Hammer, the United States response to the Berlin Crisis of 1961.

On 1 October 1961, as a result of the Berlin Crisis, the mobilized Indiana Air National Guard (ANG) 122d Tactical Fighter Wing was deployed to Chambley from Baer Field, Fort Wayne, Indiana. When activated, the 122d consisted of three tactical fighter squadrons, the 112th at Toledo Express Airport, Ohio; the 113th at Hulman Field, Terre Haute, and the 163d at Baer Field.

Due to DOD budget restrictions, the 122d was instructed to deploy only a portion of its total strength and only the 163d was deployed to France, with the other two squadrons being on active duty at their home stations, ready to reinforce the 163d if necessary. On 6 November the 26 F-84F "Thunderstreak"s arrived at Chambley, with the wings support aircraft (C-47 and T-33A's) arriving by mid-November.

Due to its reduced force structure, the wing was designated the 7122d Tactical Wing while in France. By 1 December the ground support units arrived and the 7122d prepared for an estimated overseas deployment of 10 months.

Rotations of Air National Guard pilots from the stateside squadrons in Indiana was performed to train them in local flying conditions in Europe. This allowed the 163d to maintain 100 percent manning and also to relieve the boredom of the national guard pilots on active duty in CONUS and kept them connected to the overseas part of the Wing.

The mission of the 7122d was to support Seventeenth Air Force and various NATO exercises in Europe, flying up to 30 sorties a day exercising with Seventh Army units in Germany. NATO exchanges with the West German 32nd Fighter-Bomber Wing occurred in April 1962 to increase understanding of NATO air integration and terminology.

By April, the Berlin Crisis appeared to be settled and the Kennedy Administration was interested in saving money on this emergency call-up of national guard units. On 7 June the 163d was directed to return to CONUS with all personnel, however the aircraft and equipment were to remain at Chambley.

The support C-47 and T-33s were flown back to Indiana, and in July the Air National Guardsmen of the 122 TFW/163 TFS returned to CONUS. On 16 July the 7122nd Tactical Wing was discontinued with its F-84F aircraft being turned over to the new 366th Tactical Fighter Wing. The 7367th Combat Support Group was activated as the new host unit upon their departure.

The 366th Tactical Fighter Wing was a USAFE experiment. Wing Headquarters for the 366th was activated at Chaumont-Semoutiers Air Base on 8 May 1962, with 4 operational aircraft squadrons being equipped with the aircraft left behind by the deployed Air National Guard wings deployed to France as a result of the Berlin Crisis. The assets of the ANG 163rd TFS at Chambley were assigned to the 390th Tactical Fighter Squadron, with other squadrons being formed at Étain, Phalsbourg and Chaumont Air Bases.

The mission of the 390th TFS at Chambley was the same as the Indiana Air National Guard which preceded it, close air support to army ground forces and air defense.

In February 1963, it was announced that the 10th Tactical Recon Wing would be moving to Chambley for up to six months while the runway at Toul Air Base was being rebuilt. The 10th brought additional personnel to Chambley and aircraft, with facilities being stretched to accommodate them.

The 390th TFS operated until July 1963 when it was no longer needed in Europe and was transferred to Holloman AFB, New Mexico. With their departure, the 10th TRW remained waiting for completion of runway renovations at Toul, leaving Chambley in August.

With the departure of the 390th TFS/366 TFW, Chambley-Bussieres AB was again placed in reserve status, being used for various USAFE exercises over the next two years. The facility was turned over to the 7367th Combat Support Group which acted as the host USAF unit.

The 25th flew variants of the B-66 "Destroyers" on photo reconnaissance and electronic warfare missions.

The escalation of the conflict in SE Asia prompted the establishment of Detachment 1 of the 42 ECS at Takhli RTAFB during February, 1966. 5 of its B-66's were sent to Thailand.

On 7 March 1966, French President Charles De Gaulle announced that France would withdraw from NATO's integrated military structure. The United States was informed that it must remove its military forces from France by 1 April 1967.

On 1 May 1966, the 42d was inactivated and the squadrons remaining aircraft were deployed to Takhli RTAFB, with all of its assets in Thailand being assigned to the 41st Tactical Electronic Warfare Squadron (TEWS).

The remaining aircraft of the 25 TRW were assigned to the 363d Tactical Reconnaissance Wing, Shaw AFB, South Carolina. On 15 October 1966 the 25 TRW was inactivated. The 7367th Combat Support Group was activated to close the facility.

On 1 April 1967, the last USAF personnel left Chambley AB, and the base was returned to French control.

After the USAF's departure in 1967, the French Air Force (Armée de l'Air) assumed control of Chambley AB. It was used for various flight operations and also by airborne forces for many years.

Today, Chambley is being developed into a commercial business park. The runway and various taxiways are intact and usable. Many of the old USAF buildings and hangars are used for various non-military purposes.

The airfield is still classified as being a military airfield, however many aeronautical activities take place in particular by the means of a club of Ultralight aircraft since more than 20 years and the "Lorraine Mondial Air Ballons", which is Europe's largest hot air balloon festival and takes place here every two years at the end of July.[1]

Since July 16, 2009, the main runway (05-23) of the airfield is now open to civil air traffic restricted to Very Light Aircraft with code LFJY.

Emblems Of USAFE Units That Served At Chambley-Bussieres Air Base 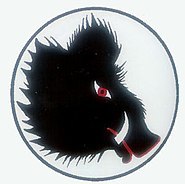