The caplock mechanism or percussion lock was the successor of the flintlock mechanism in firearm technology, and used a percussion cap struck by the hammer to set off the main charge, rather than using a piece of flint to strike a steel frizzen.

The rudimentary percussion system was developed by Rev. Alexander John Forsyth as a solution to the problem that birds would startle when smoke puffed from the powder pan of his flintlock shotgun, giving them sufficient warning to escape the shot. His invention of a fulminate-primed firing mechanism deprived the birds of their early warning system, both by avoiding the initial puff of smoke from the flintlock powder pan, as well as shortening the interval between the trigger pull and the shot leaving the muzzle. Forsyth patented his ignition system in 1807. However, it was not until after Forsyth's patents expired that the conventional percussion cap system was developed.

The caplock offered many improvements over the flintlock. The caplock was easier to load, more resistant to weather, and was much more reliable than the flintlock. Many older flintlock weapons were later converted into caplocks so that they could take advantage of this increased reliability.

Detail of the firing mechanism 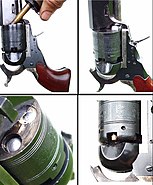 The caplock mechanism consists of a hammer, similar to the hammer used in a flintlock, and a nipple (sometimes referred to as a "cone"), which holds a small percussion cap. The nipple contains a tube which goes into the barrel. The percussion cap contains a chemical compound called mercuric fulminate or fulminate of mercury, whose chemical formula is Hg(ONC)2}}. It is made from mercury, nitric acid and alcohol. When the trigger releases the hammer, it strikes the cap, causing the mercuric fulminate to explode. The flames from this explosion travel down the tube in the nipple and enter the barrel, where they ignite the main powder charge.