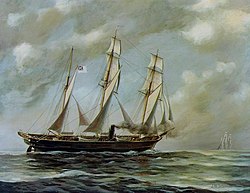 The CSS Alabama's South African Expeditionary Raid commenced shortly after the CSS Alabama left Brazil and the south Atlantic Ocean and cruised under Africa near the Cape of Good Hope. The raid lasted from about the beginning of August, 1863 to the end of September, 1863.

The primary area of operation during this expeditionary raid, was the southern seaboard of Africa ranging east and west hunting for China clippers having to make the voyage around the cape nearer Cape Town.

The CSS Alabama worked its way slowly back and forth in the vicinity of Cape Town in one of the least successful of its seven raids, capturing a few Yankee barks. While operating in this area the USS Vanderbilt (1862) pulled into Simon's Town in pursuit of the CSS Alabama, but had no luck in finding the elusive Confederate raider of the sea. The CSS Alabama rendevouzed a few times with her daughter ship the CSS Tuscaloosa.

From this raiding area off the coast of Brazil, the CSS Alabama made her way into the Indian Ocean to continue her unhindered wrecking of enemy commerce in the Indian Ocean as far as Indonesia.