It is the largest Canadian Forces Base in terms of the number of posted personnel and is formed from an amalgamation of military properties situated around the strategic Halifax Harbour in Nova Scotia.

HMC Dockyard was acquired by the Canadian government from the Royal Navy following the withdrawal of British military forces from Canada in 1906. Prior to 1906, it was known as Royal Naval Dockyard, Halifax and is one of the oldest defence establishments in Canada, having been established by the Royal Navy during the 18th century as HM Dockyard.

HMC Dockyard is located on the western side of Halifax Harbour at the southern end of The Narrows. It hosts the headquarters of Maritime Forces Atlantic (MARLANT), the formal name for the Atlantic Fleet. HMC Dockyard contains berths for Canadian and foreign warships, Formation Supply Facility, Fleet Maintenance Facility Cape Scott, shore-based training facilities as well as operations buildings for MARLANT and other organizations such as Joint Rescue Coordination Centre Halifax (JRCC Halifax).

HMC Dockyard also has an adjunct facility directly across the harbour on the Dartmouth shoreline with jetties and various buildings, including Defence Research and Development Canada - Atlantic.

HMC Dockyard maintains exclusive control of several anchorage areas within the limits of Halifax Harbour and prevents civilian vessels from sailing in the vicinity of military facilities; a floating force protection boom system is currently being constructed to prevent small vessels from unauthorized passage near warships and pierside facilities.

The original Naval Yard clock has been restored and moved to the Halifax Ferry Terminal entrance while the original Naval Yard bell is preserved at the Maritime Museum of the Atlantic in Halifax, a museum which also features a large diorama depicting the Naval Yard in 1813 at its height in the Age of Sail. The dockyard was designated a National Historic Site of Canada in 1923,[1] while Admiralty House was designated a National Historic Site in 1978.[2]

As of March 2013 the RCN announced it's decision of relocating the homeport of it's Atlantic Fleet, the RCN has also announced the new location of it's homeport for the fleet, the Port city of Corner Brook Newfoundland was said to be more 'defendable' and also had less security risk's for the Fleet for there is less civilian vessel's passing through. the new Naval Base should be ready by September 2016, the current dockyard will still be used as a training and repair base for personnel and ship's.

Stadacona, formerly referred to as HMCS Stadacona (pre-1968) and frequently referred to as "Stad", is an adjunct to HMC Dockyard located west of the waterfront in the North End of the Halifax peninsula. Prior to the arrival of the French, the location that would become Quebec was the home of a small Iroquois village called "Stadacona", after which the base is named.[3] Stadacona contains the Canadian Forces Naval Engineering School (with facilities at Herring Cove/York Redoubt, south of Halifax), the Canadian Forces Naval Operations School, the base hospital, the Canadian Forces Maritime Warfare Centre, and various messes. Stadacona is also home to the headquarters of 5th Canadian Division and the Maritime Command Museum.

Stadacona was built as the British Army's Wellington Barracks, later known as the Nelson Barracks, as part of the Halifax Defence Complex. The British military forces departed from Canada in 1906. During WW2, the Royal Canadian Navy appropriated the site from the army and it was transformed into HMCS Stadacona. 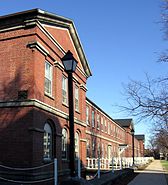 Gravestones for casualties of HMS Shannon's Capture of USS Chesapeake

Almost all the original Royal Navy 18th and 19th century buildings were demolished in World War II to make way for machine shops, stores buildings and drill halls needed to man and maintain the hundreds of corvettes being commissioned during the crash expansion of the Royal Canadian Navy during the Battle of the Atlantic. Only one residence from 1814 and the Admiral's Residence from 1819 survived. The Admiral's residence (Admiralty House) in now the Maritime Command Museum.

Wellington Gate was created in 1850 and named after Arthur Wellesley, 1st Duke of Wellington. The gate is lined on either side with two columns of Battles and Campaigns fought by Canadian Forces. The two columns read from left to right:

The Admiralty Garden was created c. 1814 and has plaques and monuments displayed to honour persons and mark events, significant to Halifax's naval history. In 1972 the "Wall of Valour" was created to recognize the bravery decorations awarded to members of the Canadian Navy and the Naval Reserves. They are listed as follows:

There are plaques of Historic Sites and Monuments Board of Canada to commorate the following:

Shearwater Heliport is an airfield located on the eastern shore of Halifax Harbour in the community of Eastern Passage that supports CH-124 Sea King helicopters used on the RCN's warships based at CFB Halifax.

Formerly a separate base known as CFB Shearwater, the airfield was realigned as part of CFB Halifax during the mid-1990s. 12 Wing, a Royal Canadian Air Force unit that reports to 1 Canadian Air Division, is the primary user of the Shearwater Heliport and is headquartered there. DND properties that were formerly aligned to CFB Shearwater, such as the Hartlen Point Golf Course and the Shearwater Jetty, are now part of CFB Halifax.

12 Wing operates out of two locations with four squadrons:

Royal Artillery Park (Halifax) is a military park, which is part of CFB Halifax, Nova Scotia. In the far corner of the Royal Artillery Park, a diminutive red brick building, is the Cambridge Military Library. This building was the social and literary centre of military Halifax. The Library opened in 1817 at Grafton Street, as an alternative to the more notorious choices of city entertainment. It moved to its present location in Royal Artillery Park in 1886 and was renamed Cambridge Military Library in 1902. The library was funded in part from Customs receipts gathered during the War of 1812 at the Battle of Hampden.

The Canadian Forces Ammunition Depot Bedford, informally referred to as the "Bedford Magazine", is a major Canadian Forces property occupying the entire northern shore of Bedford Basin. It houses all of the ordnance for MARLANT vessels and has a loading jetty and several nearby anchorages.

HMCS Trinity is the name of the organization housed at Stadacona which is tasked with maintaining MARLANT communications with vessels and other Canadian Forces and allied units, as well as developing strategic and tactical operational intelligence for unit commanders.

Housing for CFB Halifax is provided to Canadian Forces personnel and their dependants at Windsor Park, a housing area built by the Department of National Defence in the West End of Halifax. Stadacona is home to the Atlantic Block, a barracks for single ratings. Base housing also used to be provided at Shannon Park and Wallis Heights in the North End of Dartmouth, however with defence cutbacks in the 1990s, this area has been sold for civilian use. Housing is available at the 12 Wing Shearwater site, which is part of CFB Halifax. A large number of service personnel own or rent civilian property in the area.