View source
watch 01:25
Jurassic World: Dominion Dominates Fandom Wikis - The Loop
Do you like this video?
Play Sound
Not to be confused with Buhl Bull Pup or AGM-12 Bullpup. 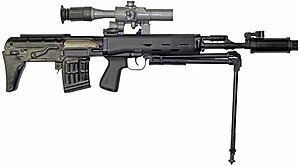 Dragunov SVU, a bullpup firearm with the action located behind the trigger.
File:Izhmash SVDS Sniper Rifle.jpg
Dragunov SVDS, a conventional rifle out of which the bullpup variant shown above was configured

"Bullpup" describes a modern firearm configuration in which the action is located behind the trigger group and alongside the shooter's face, so there is no wasted space for the buttstock as in conventional designs. This permits a shorter firearm length for the same barrel length for improved maneuverability, and reduces weight.[1]

Origins of the term "bullpup" for this configuration are unclear. The word is reported as being used in the US in 1957 to denote a target pistol, particularly one with a fancy stock.[2]

The bullpup design places the gun's action behind the trigger, in front of a short buttstock. This decreases the firearm's length and weight while retaining the same barrel length. Bullpups generally allow for a 25% reduction in weapon length, which allows for better manoeuvrability in confined spaces.[1]

An often cited shortcoming of bullpups is that, by design, their ejection ports are close to the face, generally making it difficult for left-handed shooters to use[1] because firearms in general have their ejection port on the right-hand side and eject spent cartridge casings towards the right. This means left-handed shooters must shoot right-handed, as ejected casings would otherwise hit them in the face. Certain designs, such as the FAMAS assault rifle, the Steyr AUG and the Israeli Tavor TAR-21, overcome this limitation by allowing the bolt and ejection port cover to be swapped, turning the weapon into a dedicated left-handed version.[3] Other bullpups such as the FN P90 solve the problem by ejecting downward, while the FN F2000 and Kel-Tec RFB solve the problem by ejecting forward of the rifle. The Heckler & Koch G11 largely avoided the issue of ejection by using caseless ammunition; in the event that a round failed to fire it could be manually ejected downward[citation needed].

Additionally, the bullpup's extra weight in the rear may affect balance with respect to muzzle rise and automatic firing accuracy. However, being held closer to the body, the bullpup design has the advantage of causing less fatigue to the user's positioning arm when the arm is outstretched for long periods of time. There may thus be a small reaction time advantage in raising a bullpup to fire from a downward pointed direction, a result consistent with a lighter weapon. The bolt may also have to be smaller to be able to fit in the stock, with reduced components, resulting in reduced overall weight. Being more compact and having a shorter length allows for greater close-in weapons usage; however, being of a shorter length, bayonet length effectiveness would be dimensionally reduced. Accuracy at longer distances is oft-cited as a criticism of bullpups; however, if barrel length is of similar dimensions, and all other factors are equal, accuracy should be similar. Lastly, due to the forward assembly and the necessary trigger linkage, bullpup trigger pull characteristics are often criticized.[citation needed]

The concept was first used in bolt action rifles such as the Thorneycroft carbine of 1901, although the increased distance from hand grip to bolt handle meant the decreased length had to be weighed against the increased time required to fire. It is known to have been applied to semi-automatic firearms in 1918 (6.5 mm French Faucon-Meunier semi-automatic rifle developed by Lt. Col. Armand-Frédéric Faucon), then in 1936 a bullpup machine pistol was patented by the Frenchman Henri Delacre.

After World War II, Western engineers (among them Kazimierz Januszewski, also known as Stefan Janson) drew inspiration from the German Sturmgewehr 44 assault rifle, which offered a compromise between bolt-action rifles and submachine guns. Januszewski was a Polish engineer who worked at the Polish national arsenal during the 1930s. After being mobilized during the war he escaped German and Russian forces and made his way to England, where he was a part of the "Polish design team" at Enfield Lock's Royal Small Arms Factory. The factory was run by lieutenant colonel Edward Kent-Lemon.[5] As Januszewski was developing a new rifle, the "Ideal Calibre Board" was searching for a replacement for the .303 cartridge. The Board decided on an optimal 7 mm cartridge on which Januszewski and the two teams working at Enfield had to base their designs. One design team led by Stanley Thorpe produced a gas-powered rifle with a locking system based on the Sturmgewehr. The design used steel pressings which were difficult to obtain, and the design was scrapped.[6] The result of the Polish design team's efforts was the EM-2, which broke significant new ground.[5][7]

The EM-2 contained some similarities to the Soviet AK-47, although Januszewski had never seen the Soviet rifle. The first significant bullpup assault rifle came from the British program to replace the service pistols, sub-machine guns, and rifles. In the two forms of the EM-1 and the EM-2, the new rifle concept was born as a result of the experience with small arms that was gained during the Second World War. It was obvious that the modern warfare would require the infantry to be armed with a light, selective fire weapon, with effective range of fire much longer than that of a submachine gun, but shorter than that of conventional semi-automatic or bolt action rifles. The bullpup design was seen as a necessity to retain the accuracy at range while reducing overall length. The EM-2 was adopted by the UK in 1951 as the world's first (limited) service bullpup rifle, but was promptly displaced by the adoption of the 7.62×51mm (0.308 in) NATO cartridge, to which the EM-2 was not easily adapted. The decision was rescinded and a variant of the more conventional FN FAL was adopted in its place.

A 7.62×39mm M43 calibre experimental assault rifle was developed by German A. Korobov in the Soviet Union around 1945, and a further development, the TKB-408 was entered for the 1946–47 assault rifle trials by the Soviet Army, although it was rejected in favour of the more conventional AK-47. The United States briefly experimented in the same year with the integrally-scoped Model 45A bullpup, which never progressed beyond the prototype stage.

After these failures of the bullpup design to achieve widespread service, the concept continued to be explored (for example: a second Korobov bullpup, the TKB-022).

The Steyr AUG (1977) is often cited as the first successful bullpup, finding service with the armed forces of over twenty countries, and becoming the primary rifle of Austria and Australia. It was highly advanced for the 1970s, combining in the same weapon the bullpup configuration, a polymer housing, dual vertical grips, an optical sight as standard, and a modular design. Highly reliable, light, and accurate, the Steyr AUG showed clearly the potential of the bullpup layout. The arrival of the FAMAS (1978), and its adoption by France emphasized the slide from traditional to bullpup layouts within gun designs.[citation needed]

The British resumed their bullpup experiments with the L85, which entered service in 1985. Following persistent reliability problems, it was redesigned by the then British-owned Heckler & Koch into the L85A2, and it is now a reliable, if heavy, weapon.

The Singaporean SAR 21 addressed one flaw of bullpup rifles by using a stiff sliding plate to improve the quality of trigger pull, and by using a shell deflector to achieve a slightly ambidextrous weapon.[citation needed] Having learned from extensive combat experience, Israel Military Industries developed a bullpup rifle: the Tavor (TAR-21). The Tavor is extremely light, accurate, fully ambidextrous and reliable (designed to stringent reliability standards to avoid malfunctioning in desert conditions), and is in increasing demand in other countries, notably India. The Tavor shares many similarities with the Singaporean SAR 21 and the South African Vektor CR-21. Other bullpups have been adopted recently by the Iranian army and Chinese People's Liberation Army: the KH-2002 and the QBZ-95 respectively.

Some sniper rifles – such as the American Barrett M95, the German WA 2000, the American XM500, the Chinese QBU-88, the Russian Dragunov SVU, and the Polish Bor – use the bullpup layout.

However, special operations units in countries that have formally adopted bullpup designs; for example Australia, United Kingdom and France, have continued to prefer conventional rifles usually of the AR-15 pattern (e.g. M4 carbine, Colt Canada C7/C8), the SIG 550, or the Heckler & Koch G36.