Military Wiki
Register
Don't have an account?
Sign In
Advertisement
in: Militaries, Military of Brazil, Articles incorporating text from Wikipedia 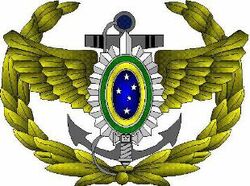 The Brazilian Air Force is the branch of aerial war of Brazilian Armed Forces . The Brazilian air force was formed when the divisions of army air and navy were merged into a single military force, initially called " the national air force ." Those two divisions transferred their air equipment, facilities, and staff for the new armed force. The F.A.B. is the greatest Air Force in Latin America, with about 700 Aircraft manned in service, and rely on March 23, 2007 with a staff 65 610 people. Plus an additional 7,500 civilian personnel employed by the Air Force.

The Brazilian Army is the largest branch of the armed forces based on land, with a force of about 235,000 soldiers. The Brazilian Army has fought in many international conflicts, like the Paraguayan War and World War II. Following the declaration of Brazilian independence from Portugal in 1822, the Brazilian Army defeated the Portuguese army, especially in Bahia, forming the Brazilian Empire, whose emperor was Emperor Dom Pedro I. Between 1865 to 1870, Brazil, Uruguay and Argentina (the "Triple Alliance") fought to defend themselves against aggression from Paraguay. After five years of war, the Alliance defeated Paraguay. With Brazilian contingent forming around 85% of the allied army, and the Brazilian Navy forming almost 100% of the allied naval force. In August 1942, after German and Italian submarines have sunk Brazilian merchant ships, popular mobilization forced the Brazilian government to declare war on Fascist Italy and Nazi Germany. In July 1944, the Brazilian Expeditionary Force was sent to Europe to join the Allies in the Italian Campaign. The Brazilian Expeditionary Force managed to capture 20,573 prisoners and suffered 443. The army also had the support of the Brazilian Air Force in the European battlefields. And the Navy of Brazil was in charge of protecting the Brazilian coast and the naval routes of the South Atlantic In 1964, the Brazilian Armed Forces, commanded by General Humberto de Alencar Castelo Branco took power through a coup, starting to Brazil's military dictatorship, which lasted until March 1985. More recently, the Brazilian Army, took part in various peacekeeping missions of the United Nations, most recently in Haiti. The Brazilian Army has the largest number of armored vehicles in South America, plus armored vehicles for troop transport and main battle tanks. It features a large elite unit, with commando and special forces units, specializing in unconventional missions, the Special Operations Brigade, unique in Latin America, as well as a Strategic Rapid Action Force formed by units highly deployable and well prepared (Special Operations Brigade, Brigade of Parachutist Infantry, 1st Battalion of Jungle Infantry (Airmobile) and 12th Light Infantry Brigade (Airmobile) to act in any part of the country, in short time, in cases of external aggression. Moreover, it has units that are experts in fighting in biomes characteristic of Brazilian territory as the pantanal (17th Border Battalion), the caatinga (72nd Motorized Infantry Battalion), mountain (11th Mountain Infantry Battalion) and jungle. Jungle units are internationally renowned, recognized as being among the best units of the world in this environment. They formed by natives in the Amazon region and from soldiers from other regions, specialists in jungle warfare by the Centro de Instrução de Guerra na Selva. Such units are framed by the 1st, 2nd, 16th, 17th and 23th jungle Infantry Brigade.

The Brazilian Navy is military responsible for naval operations and for guarding territorial waters of Brazil. It is the oldest of the Brazilian Armed Forces, and the biggest Navy of Latin America, one of the few navies of the Latin America to operate an aircraft carrier. The NAe São Paulo (A-12) of 27 307 t, Also has frigates, corvettes, oceanic patrol vessels and coastal tankers, landing troops and armor, submarines and many other coastal and river boats, helicopters and Skyhawk fighters .

to the Naval Air Force Command, the military organization responsible for providing operational air support from Navy ships in Brazil.

Trained as "Ready Force Performance", the Marines currently have approximately 15 000 men, all voluntary exam. Professionals in combat in air, at sea and especially ground fighting, but the main unit the Special Operations Battalion Marines, the mission of the Marine Corps is to ensure the projection of naval power ashore through landings were conducted jointly with ships and troops of the Navy. To be able to fulfill their missions, the Marines undergo rigorous physical training, usually with racing all day, sleepless nights, swimming, apnea, practical shooting with different weapons, especially rifles, rappelling, patrolling by land, river patrols, first aid, wilderness survival, rappelling, Fast Hope, training with radios and pitfalls of war, and martial arts.

The paramilitary Federal Police (Polícia Federal de Departamento), with 25 700 men, although a part of the armed forces is subject, however, the Brazilian Ministry of Interior (Like the Russian FSB). The Federal Police has similar functions as the German Federal Police, such as border security.

The Força Nacional de Segurança Pública (FNSP) is the Military police of Brazil.

Men of Brazil should do compulsory military service for 12 months since completing 18 years. However, most listed are dispensed without the need of the service. Normally, this service is coordinated to provide military bases near the home of recruit.

Since the early 1980s, women are allowed to serve in the military, Brazilian Army was the first army of South America accepted that women in troops career, women only serve in the Navy and Aviation Corps in Reserve. In 2006, Graduated the first class of female pilots.

The Brazil is the need to patrol its 15 735 km of land borders.Since the 1990s Brazil has been trying to relocate its forces, according to this requirement of national security.

Between 2003 and 2008, The 2nd Jungle Infantry Brigade (Brazil)|2nd Jungle Infantry Brigade, The 3rd Infantry Battalion (Brazil), the 19th Logistics Battalion (Brazil) and 22nd Military Police Platoon were provided by Army State of Rio de Janeiro for Amazon. Furthermore, the 1st and the 3rd Combat Regiment were also relocated from Rio de Janeiro for city of Santa Maria in State of Rio Grande do Sul.

Despite these efforts, the states of Rio de Janeiro, Minas Gerais and Espirito Santo continue to focus on more than 49,000 soldiers.In May 2008, The Navy announce plans to reposition its forces in Brazil .