The Bourrasque class[1] was a group of twelve French Navy destroyers (torpilleur) laid down in 1923 and commissioned from 1926 to 1936. Along with the heavier Chacal class, they were part of a plan to modernise the French fleet after World War I. The Bourrasques were smaller and slower than the Chacals, but were nonetheless comparable with the British 'W' class. The class saw varied service in the Second World War, in five different navies, on both sides. These ships were named after types of wind.

Built by Ateliers et Chantiers de France, Dunkirk
Completed 23 September 1926
Mined and lost off Nieuwpoort on 30 May 1940 during Operation Dynamo

Four ships of the class - Bourrasque, Cyclone, Orage and Sirocco - were lost in 1940; Orage on 23 May, sunk by German bombers; Bourasque by German mines and artillery fire on 30 May while evacuating troops from Dunkirk; Sirocco on 31 May, to German torpedo boats while engaged in the same operation; and Cyclone, having been badly damaged on 30 May by torpedo boats was scuttled at Brest on 18 June to prevent her capture.

Mistral and Ouragan were captured by the British in Plymouth harbour on 3 July 1940 during Operation Catapult. Both were eventually transferred to the Free French. Somewhat circuitously, Ouragan was first transferred to the Free Polish Navy. Both survived the war. Tornade and Tramontaine were lost in the same engagement off Oran on 8 November 1942, against allied units protecting Operation Torch. Typhon was scuttled in Oran harbour to stop her being acquired by the Allies. Simoun and Tempête, based at Casablanca, joined the Allies in November 1942. They may have joined the battleship Jean Bart in engaging the Allied 'Covering Group', a taskforce based on the battleship Massachusetts.

Trombe was the only ship of the class to be scuttled at Toulon in November 1942 alongside much of the French Navy. She was later raised, commissioned into the Italian Navy as FR31, and then re-transferred to the Free French on 28 October 1943. 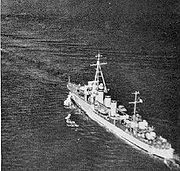