The Boeing Vertol XCH-62 (Model 301) was a three turbine-engined, heavy-lift helicopter project designed for the United States Army by Boeing Vertol. Approved in 1971, only one aircraft was built before it was cancelled in 1974. An attempt by NASA to resurrect the program was aborted in 1983.

In the late 1960s, Boeing came up with designs for machines with broad similarities to the Sea Knight and Chinook, but about twice the size of the Chinook in terms of linear dimensions. Proposed machines included the "Model 227" transport and the "Model 237" flying crane.[1]

Following award of an Army contract for a prototype of a "Heavy Lift Helicopter (HLH)" in 1973, Boeing did move forward on building an oversized flying crane machine, the "XCH-62". Rotor diameter was to be 28 meters (92 ft), fuselage length 27.2 meters (89 feet 3 inches), and footprint length 49.5 meters (162 feet 3 inches). Its widely-spaced landing gear would allow it to straddle heavy cargoes such as armored vehicles, and still carry twelve troops in its slender fuselage. Boeing also considered selling a commercial version, the "Model 301".[1] The helicopter was powered by three Allison XT701-700 turboshafts, each rated at 8,079 shp, which fed into a combining gearbox capable of absorbing 17,700 shp.[2]

The XCH-62 prototype was in an advanced state of assembly in 1975, being readied for a planned initial flight in 1976. Failures in the spiral bevel gearing of the main transmission were experienced in tests because the method of analysis employed had not considered the effect of rim bending. Consequently, new gears with strengthened rims were designed and fabricated. For a more accurate prediction of the load capacity of the gears, an extensive Finite Element Method (FEM) system was developed. The U.S. Army's XCH-62 HLH aft rotor transmission was finally successfully tested at full design torque and speed, but the US Congress cut funding for the program in August 1975.[3] The designers of the Mil Mi-26 avoided similar problems by using a split-torque design in the main rotor transmission.[4]

The incomplete XCH-62 prototype (73-22012) was stored at US Army Aviation Museum at Fort Rucker, Alabama. It was to be pulled out of storage in the mid-1980s when the Army, the US National Aeronautics & Space Administration (NASA), and the Defense Advanced Research Projects Agency (DARPA) collaborated on a scheme to finish the XCH-62 for experimental flights. However, Congress declined funding, and it didn't happen.[1]

The XCH-62 prototype, the largest helicopter ever built in the western countries, was displayed at the US Army Aviation Museum until scrapped in 2005. In 2008, several parts were sent to the Helicopter Museum at Weston-super-Mare (United Kingdom), to be exhibited there.[5] 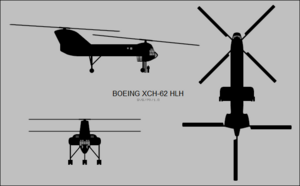 The initial version of this article was based on a public domain article from Greg Goebel's Vectorsite.