The Boeing C-137 Stratoliner was a VIP transport aircraft derived from the Boeing 707 jet airliner used by the United States Air Force. Other nations also bought both new and used 707s for military service, primarily as VIP or tanker transports. In addition, the 707 served as the basis for several specialized versions, such as the E-3 Sentry AWACS aircraft. The designation C-18 covers several later variants based on the 707-320B/C series.

USAF procurement of the Boeing 707 was very limited, amounting to three Model 707-153s designated VC-137A. When delivered in 1959 these had four 13,500 lb (6123 kg) dry thrust Pratt & Whitney J57 (JT3C6) turbojets; when subsequently re-engined with 18,000 lbf (80.1 kN) dry thrust TF33-P-5 (JT3D) turbofans they were redesignated VC-137B. Only one other variant served with the USAF: this was the VC-137C Air Force One Presidential transport, the two examples of which were Model 707-320B Intercontinentals with specialized interior furnishings and advanced communications equipment. Two further non-presidential C-137C aircraft were later added.[1]

To supplement its VC-137s, the USAF converted several C-135 airframes to VC-135 VIP standard, and these were used for staff transport mainly within the United States.[1]

The C-18 is the US military designation for the conversions of the 707-320B series.

The USAF purchased a number of 707s under the C-137 series of designations:

VC-137A
Three 707-153s with a 22-passenger VIP interior and provision for use as an airborne command post, re-designated VC-137B.
VC-137B
The three VC-137As re-engined with four Pratt & Whitney JT3D-3 engines, operated by the 89th Military Airlift Wing, redesignated C-137B.
C-137B
The three VC-137Bs redesignated when downgraded from VIP role.
VC-137C
Two 707-353Bs were purchased by the USAF (one in 1961 and one in 1972) for service as presidential transports with call signs SAM 26000 and SAM 27000; later redesignated C-137C.
C-137C
The two VC-137Cs were redesignated when downgraded from presidential use. Two further C-137Cs were acquired by the USAF, one 707-396C (a seized aircraft formerly used for arms smuggling acquired in 1985) and one 707-382B bought second hand in 1987.
EC-137D
Two aircraft built as Early Warning and Control System prototypes. Later re-engined and re-designated E-3A. A further second-hand 707-355C aircraft was acquired and configured as an airborne special operations command post.

Variants of other militaries

The following aircraft are on public display: 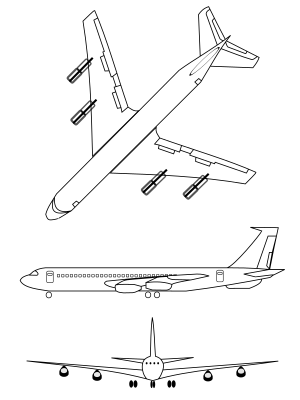