The Black Cats are the Royal Navy's helicopter display team. The team is composed of two Westland Lynx anti-submarine and anti-shipping helicopters, with the aircraft and crews drawn from 702 Naval Air Squadron based at RNAS Yeovilton in Somerset.[1]

The team performs at airshows and other public events around the UK and Europe. They perform a display which mixes close formation, opposition and synchronised manoeuvres.

The Black Cats were formed in 2001. For their first three display seasons, the team was known as the 'Lynx Pair' - the "Black Cats" title was applied in 2004. The team's predecessors as the Royal Navy Helicopter Display Team were "The Sharks", who used four red Aérospatiale Gazelle helicopters and disbanded in 1992. The team won the Steadman Sword for the best British participant at the Royal International Air Tattoo in 2003 and as "Les Chats Noirs" performed at the French Navy's 30th Anniversary of operating the Lynx at Lanveoc in Brittany. 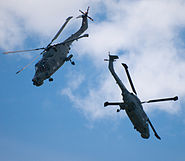