The Berlin border crossings were created as a result of the postwar division of Germany. Prior to the construction of the Berlin Wall in 1961, travel between the Eastern and Western sectors of Berlin was totally uncontrolled, although restrictions were increasingly introduced by the Soviet and East German authorities at major crossings between the sectors. This free access, especially after the closure of the Inner German border, allowed the Eastern Bloc emigration and defection to occur which resulted in the erection of the Berlin Wall.

After the construction of the Berlin Wall in 1961, border stations between East Berlin, regarded as its capital by the German Democratic Republic but unrecognized by the Western Allies, and the sectors controlled by those three Western Allies were created. Although there were few crossings at first, more sites were built to an increasing extent over the wall's lifespan. Many crossed the wall illegally, climbing over it, sailing around it, or digging under it, while many others died while attempting to cross.

Between West Berlin and German Democratic Republic territory, the border stations were developed very effectively on the GDR's side. (The official designation for controlled border traffic was Grenzübergangsstelle, GÜSt: border crossing site.) Border officials and customs agents would monitor incoming and outgoing traffic according to established procedures, at times with the utmost scrutiny. A strict division of labor among the various organizations was the rule. The security of the outward-facing border and of the border crossings was maintained by special security divisions of the GDR border guard troops (German abbreviation SiK, short for Sicherungskompanien). On May 26, 1952 the East German government decided to close the border and to build up a frontier area between East and West Germany and between West Berlin and East Germany. After May 26, 1952 there was only one quite safe way to escape to the West: Berlin. Although many border crossing points were closed in Berlin and controls at the border happened, it was quite easy to leave the Eastern sector of Berlin to the Western sector. Many East German citizen went to Berlin, bought a S-Bahn (suburban train) or U-Bahn (subway) ticket and left East Berlin.[1]

The actual inspections of vehicle and pedestrian traffic were carried out by the passport control units (German abbreviation PKE, short for Passkontrolleinheiten). The PKE units were not under the command of the GDR border guard troops and thereby the Ministry of Defense, but the Ministry for State Security (Division VI / Department 6, Passport Control). While on duty at the border stations, however, the PKE would wear the same uniforms as the border guard troops. For personal inspections, highly qualified and specially trained forces were used exclusively. The passports, identification cards, etc., could be transmitted from the inspection sites to a processing center using closed-circuit television and ultraviolet light, where they were recorded. From there, commands were issued using a numeric display to the passport control unit, for example "flip page", "request additional documentation", "delay processing", ask predefined questions, etc.

On the West Berlin side, police and customs agents were stationed. No personal inspections usually took place there.

West Germans and citizens of other Western countries could in general visit East Germany. Usually this involved application of a visa at an East German embassy several weeks in advance. Visas for day trips restricted to East Berlin were issued without previous application in a simplified procedure at the border crossing. However, East German authorities could refuse entry permits without stating a reason. In the 1980s, visitors from the western part of the city who wanted to visit the eastern part had to exchange at least DM 25 into East German currency at the poor exchange rate of 1:1. It was forbidden to export East German currency out of the East, but money not spent could be left at the border for possible future visits. Tourists crossing from the west had to also pay for a visa, which cost DM 5; West Berliners did not have to pay this.

West Berliners initially could not visit East Berlin or East Germany at all. All crossing points were closed to them between 26 August 1961 and 17 December 1963. In 1963, negotiations between East and West resulted in a limited possibility for visits during the Christmas season that year (Passierscheinregelung). Similar very limited arrangements were made in 1964, 1965 and 1966. In 1971, with the Four Power Agreement on Berlin, agreements were reached that allowed West Berliners to apply for visas to enter East Berlin and East Germany regularly, comparable to the regulations already in force for West Germans. However, East German authorities could still refuse entry permits.

East Berliners and East Germans could at first not travel to West Berlin or West Germany at all. This regulation remained in force essentially until the fall of the wall, but over the years several exceptions to these rules were introduced, the most significant being:

However, each visit had to be applied for individually and approval was never guaranteed. In addition, even if travel was approved, GDR travelers could exchange only a very small amount of East German Marks into Deutsche Marks (DM), thus limiting the financial resources available for them to travel to the West. This led to the West German practice of granting a small amount of DM annually (Begrüßungsgeld, or welcome money) to GDR citizens visiting West Germany and West Berlin, to help alleviate this situation.

Citizens of other East European countries except Yugoslavia were in general subject to the same prohibition on visiting Western countries as East Germans, though the applicable exception (if any) varied from country to country. Citizens of Hungary could freely cross into West Berlin from January 1, 1988.

Border crossings up to 1990

There were several border crossings between East and West Berlin:

In addition, entirely located in East Berlin (reached by streetcar, underground, or railroad):

These crossings could be used for passage on the prescribed transit highways and for travel within the SOZ/GDR:

The numerous border crossings on waterways (e.g., Spree, Havel, Teltow Canal) were only open to commercial freight traffic. Recreational boats had to be loaded onto ships or towed overland.

To and from Berlin-Schönefeld Airport for air travel:

At the Berlin-Tempelhof and Berlin-Tegel airports there were border crossings manned by West Berlin police and customs. These were not located in territory controlled by the GDR. In addition to processing for international air travel, the personal documents of travelers between West Berlin and the Federal Republic were inspected.

The various illegal or unofficial border crossings are not reliably documented:

In the time between the fall of the Berlin Wall on 9 November 1989 and the abolition of all border controls on 1 July 1990, numerous additional border crossings were built for interim use. Because of their symbolic value, the most famous of these were Glienicke Bridge, Bernauer Straße, Potsdamer Platz, and the Brandenburg Gate.

The opening of the Brandenburg Gate was merely a public-relations formality which took place on 22 December 1989 at the request of then-Chancellor Helmut Kohl. Hundreds of television crews from all over the world had anticipated this historic event for weeks.

West Germans and West Berliners were allowed visa-free travel to the East Berlin and East Germany starting 23 December 1989. Until then, they could only visit under restrictive conditions that involved application for a visa several days or weeks in advance and obligatory exchange of at least 25 DM per day of their planned stay. Thus, in the weeks between 9 November 1989 and 23 December 1989, East Germans could travel more freely than Westerners as they were able to cross into West Berlin with just passport checks.

There are also roads that are reopened between 12 June 1990 and 21 June 1990 with or without border controls.

The controls were abandoned on 1 July 1990, the day of the currency union and before the actual reunification of Germany on 3 October 1990. In the months after the fall of the Wall, border crossings between the East and the West had become more and more irrelevant.

Today, a few portions of the structures have been retained as a memorial.

Today the only remaining border crossings in Berlin are located at Tegel and Schönefeld airports (Schönefeld located outside Berlin city limits) and all Cold War-specific border control procedures have disappeared altogether. They are staffed by German Federal Police and Customs for normal international traffic screening purposes. 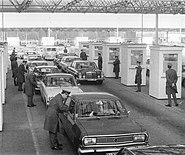 Passport control on the bus at the Drewitz-Dreilinden crossing.

What is left of Checkpoint Bravo today. 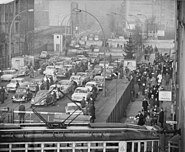 Passport checks at the Oberbaumbrücke crossing in 1972.

Checkpoint booths outside the Friedrichstraße railway station, which, although located completely in East Berlin, was a major crossing as it was served by trains from West Berlin..

Crossings after the fall of the Berlin Wall

Crowds of East Germans stream towards the Bornholmer Straße crossing on 10 November 1989, a day after the fall of the Berlin Wall.

Queues of cars at the Bornholmer Straße crossing.

Crowds at the Chausseestraße crossing on 10 November 1989.

At he Invalidenstraße crossing on 10 November 1989.

East Germans drive their vehicles through Checkpoint Charlie as they take advantage of relaxed travel restrictions to visit West Germany. The car is Lada 2102.

Queues at the Friedrichstraße railway station after the fall of the Wall.

Newly opened crossings after the fall of the Wall

Handout announcing the opening of the Brandenburg Gate crossing.

The Eberswalder Straße being created on the night of 10 November 1989, a day after the fall of the Berlin Wall. The crossing was opened the following day.

East German guards doing the job at the Rudower Chaussee crossing on 21 November 1989.

Scene at the Stubenrauchstraße crossing on 14 November 1989.

An East German policeman monitors traffic returning to East Berlin through the newly created opening in the Berlin Wall at Potsdamer Platz on 14 November 1989.

Newly created crossing between East and West Berlin at Potsdamer Platz in November 1989.

Newly created crossing between East and West Berlin at Potsdamer Platz in November 1989.

East German border guards at walkway linking the S-Bahn and U-Bahn platforms, which is under West Berlin jurisdiction, at the Jannowitzbrücke subway station in November 1989.

Long queues to cross the border at the Jannowitzbrücke subway station in November 1989. 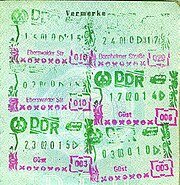 Stamps from the Brandenburg Gate and Potsdamer Platz crossings, as well as the Friedrichstraße railway station crossing and Friedrichstraße crossing, which is better known as Checkpoint Charlie.