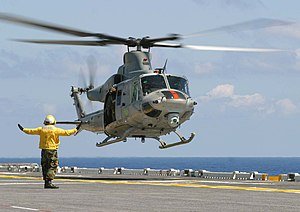 The UH-1Y is currently in full-rate production to replace the USMC's aging fleet of UH-1N Twin Huey light utility helicopters first introduced in the early 1970s. The UH-1Y was to have been remanufactured from UH-1Ns, but in 2005 it was approved for the aircraft to be built as new.[6]

The Y-model updates an airframe that has been central to the Marine Corps aviation in Iraq. The Huey has many mission requirements including command and control (C2), escort, reconnaissance, troop transport, medical evacuation and close air support. Typically detachments of 2–4 Hueys have been deployed with detachments of 4–8 Cobras. The forward mounted weaponry of the Cobra combined with the door guns of the Huey provides a 240° field of fire.

Over the years new avionics and radios, in addition to modern door guns and safety upgrades, have greatly increased the UH-1N's empty weight. With a maximum speed of approximately 100 knots (190 km/h) and an inability to lift much more than its own crew, fuel and ammunition, the UH-1N, while useful, is limited in its utility.

The Y-model upgrades pilot avionics to a glass cockpit, adds further safety modifications and provides the UH-1 with a modern FLIR system. However, the biggest improvement is an increase in engine power. By replacing the engines and the two bladed rotor system with four composite blades the Y-model will return the Huey to the utility role for which it was designed. Originally the UH-1Y was to have been remanufactured from UH-1N airframes, but in April 2005 approval was granted to build them as new helicopters.[6][11]

The UH-1Y variant modernizes the UH-1 design. Its most noticeable upgrade over previous variants is a four-bladed, all-composite rotor system designed to withstand ballistics up to 23 mm. A 21-inch (530 mm) insert just forward of the main door has been installed for more capacity. The UH-1Y features upgraded engines and transmission, a digital cockpit with flat panel multifunctional displays, and an 84% parts commonality with the AH-1Z. Compared to the UH-1N, the Y-model has an almost 125% increased payload, almost 50% greater range, a reduction in vibration, and higher cruise speed.[9][17][18] The UH-1Y can keep up with the other helicopters it is escorting. The UH-1Y will have more power to maneuver. Ground forces commanders riding in the Y-model will have radios, firepower and the range to match the transport helicopters carrying their troops.[citation needed]

The Lockheed Martin target sight system (TSS) incorporates a third-generation FLIR sensor. The TSS provides target sighting in day, night or adverse weather conditions. The system has various view modes and can track with FLIR or by TV. It is also used on the AH-1Z Viper and the KC-130J Harvest HAWK.[19]

The UH-1Y and AH-1Z completed their developmental testing in early 2006.[20] During the first quarter of 2006 the UH-1Ys were transferred to the Operational Test Unit at the NAS Patuxent River, where they began operational evaluation (OPEVAL) testing.[21] In February 2008, the UH-1Y and AH-1Z began the second and final portion of OPEVAL testing.[22]

On 8 August 2008, the Marine Corps certified the UH-1Y as operationally capable and was deployed for the first time in January 2009 as part of the aviation combat element of the 13th Marine Expeditionary Unit.[23][24]