Battle of the Yser

The Battle of the Yser (French language: Bataille de l'Yser, Dutch language: Slag om de IJzer ) was a battle which took place in October 1914 between the towns on Nieuwpoort and Diksmuide along a 35 kilometres (22 mi) long stretch of the Yser river and Yperlee canal in Belgium.[2] The front line was held by a large Belgian force which succeeded in halting the German advance, though only after heavy losses. After two months of defeats and retreats, the battle of Yser finally halted the invasion that gave Germans control of over 95% of Belgian territory. Victory in the battle allowed Belgium to retain control of a sliver of its territory while making King Albert a Belgian national hero and sustaining national pride and provided a venue for commemorations of heroic sacrifice for the next century.

As part of the execution of the Schlieffen Plan, Belgium had been invaded by Germany. Following the Siege of Antwerp, the remnants of the Belgian Army were pushed back to the far west corner of the country, and decided to make a stand behind a 22-mile long front on the Yser Canal as the Germans tried to reach the English Channel ports of Calais and Dunkerque. Just to the south the First Battle of Ypres took place at the same time as the Battle of the Yser and both battles concluded a series of unsuccessful flanking manoeuvres by the belligerents and established the trench lines of the Western front.

The entire Belgian Army was deployed to defend the front. The troops were exhausted and low on ammunition after two months of retreat. France reinforced the Belgians with 6,000 marines and an infantry division.

The German forces comprised the newly organized German Fourth Army, commanded by the Duke of Württemberg, with portions of three other armies, along with cavalry and heavy artillery units. It moved southwards from Bruges and Ostend in the direction of the Yser river. Its mission was to take the line from Nieuwpoort to Ypres.[3]

The Allies also assembled a naval force under British Admiral Horace Hood of the Royal Navy.[4] Three monitors (Severn, Humber and Mersey) from this force bombarded German forces in Lombardsijde from the sea.

The city of Diksmuide was first attacked on 16 October 1914 and defended by Belgian and French troops under Colonel Alphonse Jacques who would later be awarded the title "de Dixmude" for his role in the defence of the city. Despite heavy losses, the Belgians and French held the town. The press, politicians, literary figures and the military channeled public opinion, making out that the defence of the town was both strategic and heroic.[5]

On 18 October the German offensive started. It overran the frontal defense positions of the Belgian, British and French armies along a line stretching from Nieuwpoort down to Arras in France. The objective was to defeat the Belgian and French armies and to deprive the British of access to the harbours of Calais, Boulogne and Dunkirk.

It took four days of heavy fighting before the German troops to drive the allies back and reach the banks of the Yser. On 21 October, the Germans were able to establish a small bridgehead on the other side of the river. The last bridge was blown up on 23 October. Diksmuide bore the brunt of repeated German offensives and bombardments, yet the town was still not taken.

The French high command planned to flood large parts of their territory as a defensive measure. This would have put the Belgian army in the impossible choice of being trapped between the flood and the Germans, or else abandoning the last part of unoccupied Belgium. The plan was postponed since the Belgian army itself had started preparations to flood the area between the Yser and its tributary canals.

On 25 October, the German pressure on the Belgians had grown so large that a decision was taken to inundate the entire Belgian front line. After an earlier failed experiment on 21 October, the Belgians successfully managed to open the sluices at Nieuwpoort during the nights of 26 to 29 October during high tides, steadily raising the water level until an impassable flooded area was created about a mile wide and stretching as far south as Diksmuide. Two sluiceworkers, Karel Cogge (nl) and Hendrik Geeraert (nl), became national heroes in Belgium for their role in the inundations.

On 29 October, Diksmuide finally fell to German forces. The Germans launched another large attack on the Yser on 30 October. The attack punched through the Belgian second line, and they took Ramskapelle and Pervijze. The attack was stalled by Belgian and French counterattacks. The final attack, planned for the next day was called off, when the attacking Germans became aware of the flooding of the land in their rear. They withdrew in the night before 31 October and the front on the Yser stabilized. The fighting continued though until 22 November further south, in the First Battle of Ypres.

The historical importance of the Battle of the Yser is twofold. First, Germany did not manage to defeat the Belgian army and knock Belgium out of the war. Second, the German failure to occupy the last corner of Belgium helped to conclude the Race to the Sea and led to the establishment static trench warfare along the Western Front.

The struggle of the Belgian army to hold on to its territory during the remainder of the war, and especially the experiences of ordinary Flemish infantrymen, led to an increase in Flemish national sentiment and the foundation of the Frontbeweging, the first party of the Flemish Movement, in 1917.[6] 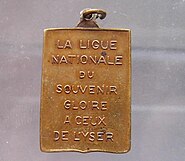