The Battle of Wake Island began simultaneously with the Attack on Pearl Harbor and ended on 23 December 1941, with the surrender of the American forces to the Empire of Japan. It was fought on and around the atoll formed by Wake Island and its islets of Peale and Wilkes Islands by the air, land and naval forces of the Empire of Japan against those of the U.S., with Marines playing a prominent role on both sides.

The island was held by the Japanese for the duration of the Pacific War; the remaining Japanese garrison on the island surrendered to a detachment of United States Marines on September 4, 1945.[6]

The United States Navy constructed a military base on the atoll. On 19 August, the first permanent military garrison, understrength elements of the 1st Marine Defense Battalion,[7] totaling 450 officers and men,[8] were stationed on the island, under Major James P.S. Devereux. Also present on the island were 68 U.S. Navy personnel and about 1,221 civilian workers for the Morrison-Knudsen Company. Forty-five Chamorro men were employed by Pan American Airways at the company's facilities in Wake Island, one of the stops on the Pan Am Clipper transPacific air service initiated in 1935.

The Marines were armed with six 5 in (127mm)/51 cal pieces, originating from the battleship USS Texas; twelve 3 in (76 mm)/50 cal anti-aircraft guns (with only a single working anti-aircraft director among them); eighteen .50 in (12.7 mm) Browning heavy machine guns; and thirty .30 in (7.62 mm) heavy, medium and light water- and air-cooled machine guns of various manufacture and operating condition.

On 28 November, U.S. Navy Commander Winfield S. Cunningham reported to Wake to assume overall command of U.S. forces on the island. He had only 10 days to examine defenses and assess his men before war began.

On 8 December, just hours after the attack on Pearl Harbor (Wake being on the opposite side of the International Date Line), 36[9] Japanese Mitsubishi G3M3 bombers flown from bases on the Marshall Islands attacked Wake Island, destroying 8 of the 12 F4F-3 Wildcat fighter aircraft belonging to Marine Corps fighter squadron VMF-211 on the ground. The remaining four Wildcats were in the air patrolling, but because of poor visibility failed to see the attacking Japanese bombers. These Wildcats did down two bombers on the following day, however.[10] All of the Marine garrison’s defensive emplacements were left intact by the raid, which primarily targeted the naval aircraft. Of 55 Marine aviation personnel, 23 were killed and 11 were wounded.

Early on the morning of 11 December, the garrison, with the support of the four remaining Wildcats, repelled the first Japanese landing attempt by the South Seas Force, which included the light cruisers Yubari, Tenryū, and Tatsuta; the destroyers Yayoi, Mutsuki, Kisaragi, Hayate, Oite, and Asanagi; two Momi-class destroyers converted to patrol boats (Patrol Boat No. 32 and Patrol Boat No. 33), and two troop transport ships containing 450 Special Naval Landing Force troops.

The U.S. Marines fired at the invasion fleet with their six 5 in 127mm coastal artillery guns. Major Devereux, the Marine commander under Cunningham, ordered the gunners to hold their fire until the enemy moved within range of the coastal defenses. "Battery L", on Peale islet, succeeded in sinking Hayate at a distance of 4,000 yd (3,700 m) with at least two direct hits to her magazines, causing her to explode and sink within two minutes, in full view of the defenders on shore. Yubari's superstructure was hit 11 times. The four Wildcats also succeeded in sinking another destroyer, Kisaragi, by dropping a bomb on her stern where the depth charges were stored. Both Japanese destroyers were lost with all hands, with Hayate becoming the first Japanese surface warship to be sunk during World War II. The Japanese force withdrew before landing. This was the first Japanese defeat of the war, and it was the last time in history that a forced landing attempt was repelled by shore batteries.

After the initial raid was fought off, American news media reported that, when queried about reinforcement and resupply, Cunningham was reported to have quipped “Send us more Japs!” In fact, Commander Cunningham sent a long list of critical equipment—including gunsights, spare parts, and fire-control radar—to his immediate superior: Commandant, 14th Naval District. It is believed that the quip was actually padding (a technique of adding nonsense text to a message to make cryptanalysis more difficult).[11]

But the continuing siege and frequent Japanese air attacks on the Wake garrison continued, without resupply for the Americans. The initial resistance offered by the garrison prompted the Japanese Navy to detach two aircraft carriers (Sōryū and Hiryū) from the force that attacked Pearl Harbor to support the second landing attempt.

The projected U.S. relief attempt by Admiral Frank Fletcher's Task Force 11 (TF 11) and supported Admiral Wilson Brown’s TF 14 consisted of the fleet carrier Saratoga, the fleet oiler Neches, the seaplane tender Tangier, the heavy cruisers Astoria, Minneapolis, and San Francisco, and 10 destroyers. The convoy carried the 4th Marine Defense Battalion, the VMF-221 fighter squadron equipped with Brewster F2A-3 Buffalo fighters, along with 9,000 5 in (127mm) rounds, 12,000 3 in (76 mm) rounds, and 3,000,000 .50 in (12.7 mm) rounds, as well as a large amount of ammunition for mortars and other battalion small arms. TF 11—with the fleet carrier Lexington, three heavy cruisers, eight destroyers, and an oiler—was to undertake a raid on the Marshall Islands to divert Japanese attention.

At 21:00 on 22 December, after receiving information indicating the presence of two IJN carriers and two fast battleships (which were actually heavy cruisers) near Wake Island Vice Admiral William S. Pye—the Acting Commander in Chief of the U.S. Pacific Fleet—ordered TF 14 to return to Pearl Harbor for fear of losses.[12]

The second Japanese invasion force came on 23 December, composed mostly of the same ships from the first attempt with the major reinforcements of the carriers Hiryu and Soryu, plus 1,500 Japanese marines. The landings began at 02:35 where, after a preliminary bombardment, the ex-destroyers Patrol Boat No. 32 and Patrol Boat No. 33 were beached and burned in their attempts to land the invasion force. After a full night and morning of fighting, the Wake garrison surrendered to the Japanese by mid-afternoon.

The U.S. Marines lost 47 killed and 2 MIA during the entire 15-day siege, while three U.S. Navy personnel and at least 10 U.S. civilians were killed, 10 Chamorros civilians killed, and 12 civilians wounded. Japanese losses were recorded at between 700 to 900 killed, with at least 300 more wounded,[13] in addition to the two destroyers lost in the first invasion attempt and at least 28 land-based and carrier aircraft either shot down or damaged. The Japanese captured all men remaining on the island, the majority of whom were civilian contractors employed with Morrison-Knudsen Company.

Captain Henry T. Elrod, one of the pilots from VMF-211, was awarded the Medal of Honor posthumously for his action on the island during the second landing attempt, having shot down two Japanese A6M2 Zeros, and sunk the Japanese destroyer Kisaragi. A special military decoration, the Wake Island Device, affixed to either the Navy Expeditionary Medal or the Marine Corps Expeditionary Medal, was created to honor those who had fought in the defense of the island.

Fearing an imminent invasion, the Japanese reinforced Wake Island with more formidable defenses. The American captives were ordered to build a series of bunkers and fortifications on Wake. The Japanese brought in an 8 inch (200 mm) naval artillery gun that they had captured in Singapore. The U.S. Navy established a submarine blockade instead of an amphibious invasion on Wake Island. As a result, the Japanese garrison starved which led to the extinction of an endemic bird. On 24 February 1942, aircraft from the carrier Enterprise attacked the Japanese garrison on Wake Island. U.S. forces bombed the island periodically from 1942 until Japan’s surrender in 1945. On 24 July 1943, B-24 Liberators led by Lieutenant Jesse Stay of the 42nd Squadron (11th Bombardment Group) of the U.S. Army Air Forces, in transit from Midway Island, struck the Japanese garrison on Wake Island. At least 2 men from that raid were awarded Distinguished Flying Crosses for their efforts.[14] Future President George H. W. Bush also conducted his first combat mission as a Naval Aviator over Wake Island. After this, Wake was occasionally raided but never attacked en masse.

On 5 October 1943, American naval aircraft from Yorktown raided Wake. Two days later, fearing an imminent invasion, Rear Admiral Shigematsu Sakaibara ordered the execution of the 98 captured American civilian workers remaining on the island, kept to perform forced labor. They were taken to the northern end of the island, blindfolded and executed with a machine gun. One of the prisoners (whose name has never been discovered) escaped the massacre, apparently returning to the site to carve the message 98 US PW 5-10-43 on a large coral rock near where the victims had been hastily buried in a mass grave. The unknown American was recaptured, and Sakaibara personally beheaded him with a katana. The inscription on the rock can still be seen and is a Wake Island landmark.

On 4 September 1945, the remaining Japanese garrison surrendered to a detachment of U.S. Marines. The handover of Wake was officially conducted in a brief ceremony aboard Levy. After the war, Sakaibara and his subordinate—Lieutenant-Commander Tachibana—were sentenced to death for the massacre and other war crimes. Several Japanese officers in American custody had committed suicide over the incident, leaving written statements that incriminated Sakaibara. Admiral Sakaibara was hanged on June 18, 1947.[15] Eventually, Tachibana's sentence was commuted to life in prison. The murdered civilian POWs were reburied, after the war, in Honolulu's National Memorial Cemetery of the Pacific, commonly known as Punchbowl Crater.

William L. Taylor, like many of the Wake Island POWs, was relocated to China for forced labor for the Japanese army. In 1945 he was traveling on a Japanese train as work detail from Shanghai when he escaped with Jack Hernandez by jumping off the train when Japanese guards were not looking. Hernandez broke his leg and was forced to stay as Taylor continued his journey. Down the line, Taylor reluctantly met up with Chinese Communist soldiers who he quoted as saying: "You're OK now, we are friends with the Americans." After 10 weeks of traveling with the Chinese Communists in northern China he was able to contact American military forces who called for a plane to pick him up and take him to an American base in northern China. Before he left China he met Mao Zedong, who gave him a gift of Chinese rugs and told him he was the only POW who had successfully come through north China. In an interview with the History Channel during the episode Wake Island: The Alamo of the Pacific, he claims that Mao "saved his life".

The Paramount studio began work on a movie even before the real life Battle for Wake Island was over. The resulting 1942 film, directed by John Farrow, tacks unrelated romantic subplots onto a straightforward re-telling of the battle. The film contains numerous factual errors, leaving viewers with the impression that the island's defenders fought to the last man; that the island's naval commander was killed in a bombing raid (he survived); that cruisers rather than the smaller destroyers were sunk; and that the Island defense was in the hands of USMC officers. However, the film succeeded in its primary propaganda purpose of creating a stirring patriotic film. Others state that it was standard Hollywood procedure to embellish the situation, much like they do today. Wake Island was nominated for four Academy Awards, including best picture. Farrow won the 1942 New York Film Critics Circle Award for best director. A 2003 television documentary, Wake Island: Alamo of the Pacific, included interviews with both U.S. Marines and Japanese sailors who took part in the fighting. The film received a 2004 Emmy nomination for music and sound.

In the 2002 computer game Battlefield 1942 players can replay on the map Wake Island (a fair copy of the island) the second attack of the Japanese. 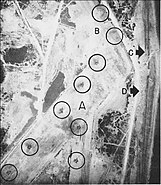