Military Wiki
Register
Don't have an account?
Sign In
Advertisement
in: Articles incorporating text from Wikipedia, Conflicts in 1899, 1899 in the Philippines,
and 3 more 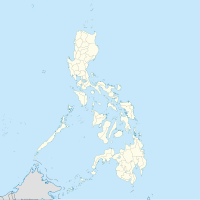 The Battle of Tirad Pass, sometimes referred to as the "Philippine Thermopylae",[3] was a battle in the Philippine-American War fought on December 2, 1899, in northern Luzon in the Philippines, in which a 60-man Filipino rear guard commanded by Brigadier General Gregorio del Pilar succumbed to around 300 Americans of the 33rd Infantry Regiment under Major Peyton C. March, while delaying the American advance to ensure Emilio Aguinaldo's escape.

The retreat of Aguinaldo from Bayambang, Pangasinan, through the mountainous terrain began on November 13, 1899, after he had disbanded the regular Filipino army into guerrilla units.[2] On November 23, Aguinaldo's party reached the pass, which provided a strategic bottleneck. It was to be protected by a rear guard under General Gregorio del Pilar, who noticed the advantageous terrain of Tirad Pass (Pasong Tirad as it was locally called),[4] and hunkered down to defend it while Aguinaldo escaped through the mountains.[2] The hand-picked force of Filipinos, which was the remaining contingent of the late Antonio Luna's army, constructed several sets of trenches and stone barricades on both shoulders of the pass, as well as on top of its 4,500-foot height.[2] Meanwhile, during early November, Major March had been given the task of pursuing Aguinaldo. By November 30, March and his men, in haste to catch the Philippine president, marched through Candon, Santo Tomas, La Union and Salcedo, Ilocos Sur.[2] He and his men found out that Aguinaldo had passed through Salcedo five days previously, and that fueled the Americans' march to Concepcion, a town overlooked by the steep pass, which they reached by December 1. March had no clear idea of the size of Aguinaldo's rear guard, but he had calculated it to be no more than 150 men.[2]

At about 6:30 in the morning of December 2, the Americans advanced up the trail but were met with a steady volley of fire, resulting in them only being able to climb around 300 feet. The Americans abandoned the idea of a frontal assault and took cover in the zigzag trail. Texan sharpshooters stationed themselves on a hill overlooking the trenches and proceeded to whittle down the Philippine rear guard with measured volleys. Nevertheless, the Filipinos continued to hold their ground, utilizing focused volley fire that repelled other advances by the Americans.[2] Therefore, March sent elements of their force with an Igorot villager named Januario Galut to determine Filipino positions and outflank the defenders.[2] While the search party was not yet returning, three American soldiers, wanting to have a Medal of Honor, rushed to the battlefield but found themselves receiving Filipino fire. Two were dead, being the only Americans killed in the encounter, and the third one was badly wounded.[2]

More than five hours after the battle began, the Americans began to feel the scorching heat of the midday sun and decided to rest for a while in the rock cover. Later that day, as the search party had succeeded their task, the Americans fell upon the rear of the outnumbered defenders, defeating them. Over the course of the battle, 52 of the 60 Filipinos were killed.[2] Among the dead was General del Pilar, shot through the neck at the height or end of the struggle (depending upon which eye-witness account is to be believed[5]).

The Americans lost 2 dead and 9 wounded, most of which resulted from the repelled frontal assault. Despite nearly total annihilation, however, the Filipinos under Del Pilar held off the Americans long enough for Aguinaldo to escape.[2] On September 6, 1900, Aguinaldo reached Palanan, Isabela, where he would continue to lead the guerrilla campaign he began on November 13, 1899. Later, on March 23, 1901, Aguinaldo would be captured by men of General Frederick Funston.[4]

According to Filipino writer and historian Nick Joaquin however, the main objective of the Americans was not to pursue Aguinaldo but to keep him away from linking up with the elite Tinio Brigade, which was under the command of Manuel Tinio. In his critical book of essays "A Question of Heroes" he notes that Tirad Pass was an "exercise in futility" in that it only allowed Aguinaldo to "run to nowhere".[6]

Del Pilar's diary was recovered among the possessions looted by the victorious Americans, who had stripped him bare of his military decorations, his uniform and his personal belongings, leaving him, as the eyewitness, correspondent Richard Henry Little wrote, "We carved not a line and we raised not a stone, But we left him alone with his glory". The exact wording of its poignant final entry, written on the night of December 1, differs somewhat between sources quoting it. Two versions are:

In honor of Del Pilar's heroism, the Philippine Military Academy was named Fort Del Pilar and a historical marker placed at the site of the battle.[1]

The Battle of Tirad Pass and the death of Del Pilar was also commemorated during World War II when the Japanese-backed government of President José P. Laurel sought to re-kindle anti-American sentiment by reviving memories of the Philippine-American War with the creation of the Tirad Pass Medal. The design of the obverse (front) of the medal included a bust of Del Pilar and a view of Tirad Pass. The design of the reverse (back) includes the date 1944. The Tirad Pass Medal was the only military medal or decoration issued by the Laurel government during the Japanese occupation.[11]