Military Wiki
Register
Don't have an account?
Sign In
Advertisement
in: Articles with Russian-language external links, Articles incorporating text from Wikipedia, Conflicts in 1859,
and 7 more

The Battle of Solferino (referred to in Italy as the Battle of Solferino and San Martino) on 24 June 1859 resulted in the victory of the allied French Army under Napoleon III and Sardinian Army under Victor Emmanuel II (together known as the Franco-Sardinian Alliance) against the Austrian Army under Emperor Franz Joseph I. It was the last major battle in world history where all the armies were under the personal command of their monarchs. Perhaps 300,000 soldiers fought in this important battle, the largest since the Battle of Leipzig in 1813. There were about 130,000 Austrian troops and a combined total of 140,000 French and allied Piedmontese troops. After this battle, the Austrian Emperor refrained from further direct command of the army.

The battle led the Swiss Jean-Henri Dunant to write his book, A Memory of Solferino. Although he did not witness the battle (his statement is contained in an "unpublished page" included in the 1939 English edition published by the American Red Cross), he did tour the field following the battle, and was greatly moved by what he saw. Horrified by the suffering of wounded soldiers left on the battlefield, Dunant set about a process that led to the Geneva Conventions and the establishment of the International Red Cross.

The Battle of Solferino was a decisive engagement in the Second Italian War of Independence or Second Independence War, a crucial step in the Italian Risorgimento. The war's geopolitical context was the nationalist struggle to unify Italy, long divided between France, Austria, Spain and numerous small Italian principalities. The battle took place near the villages of Solferino and San Martino, Italy, south of Lake Garda between Milan and Verona.

The confrontation was between the Austrians on one side, versus the French and Piedmontese forces who opposed their advance. The Austrians were retreating eastwards after their defeat at the Battle of Magenta. In the morning of 23 June, after the arrival of emperor Franz Joseph, they changed direction to counterattack along the river Chiese. At the same time, Napoleon III ordered his troops to advance, causing the battle to occur in an unpredicted location. While the Piedmontese fought the Austrian right wing near San Martino, the French battled to the south of them near Solferino against the main Austrian corps.

The Austrian forces were personally led by their militarily inexperienced 29-year-old emperor, Franz Joseph, who had fired his commander-in-chief Gyulai after the defeat in Magenta, and were divided into two field armies: 1st Army, containing three corps (III, IX and XI), under Franz von Wimpffen and 2nd Army, containing four corps (I, V, VII and VIII) under Franz von Schlick.

The French army at Solferino, personally led by Napoleon III, was divided in four Corps plus the Imperial Guard. Many of its men and generals were veterans of the French conquest of Algeria and the Crimean War, but its commander-in-chief had no military experience of note. The Sardinian army had four divisions on the field.

According to the allied battleplan formed on 24 June the Franco-Sardinian army moved east to deploy along the right river banks of the Mincio. The French were to occupy the villages of Solferino, Cavriana, Guidizzolo and Medole with respectively 1st Corps (Baraguey d'Hilliers), 2nd Corps (Mac-Mahon), 3rd Corps (Canrobert) and 4th Corps (Niel). The four Sardinian divisions were to take Pozzolengo. After marching a few kilometers, the allies came into contact with the Austrian troops who had entrenched themselves in those villages. In the absence of a fixed battle plan, the battle which took place was uncoordinated, reason why so many became casualties, and fell in to three separate engagements at Medole (south), Solferino (center) and San Martino (north).

The battle started at Medole around 4 am. Marching towards Guidizzolo, the 4th Corps encountered an Austrian infantry regiment of the Austrian 1st Army. General Niel immediately decided to engage the enemy and deployed his forces east of Medole. This move prevented the three corps (III, IX and XI) of the Austrian 1st Army from aiding their comrades of the 2nd Army near Solferino, where the main French attacks took place. The French forces were numerically inferior to the Austrians. The 4th Corps contained three infantry divisions under de Luzy, Vinoy and Failly and a cavalry brigade. Niel, holding a thin line of 5 kilometers in length, was able to stop the Austrian assaults on his position by ably warding off attacks and counterattacking at opportune moments. After 15 hours of combat the Austrians retreated, both sides having lost in total nearly 15,000 men.

Around 4:30 am the advance guard of the 1st Corps (three infantry divisions under Forey, de Ladmirault, Bazaine and a cavalry division under Desvaux) came in to contact with the Austrian V Corps under Stadion near Castiglione delle Stiviere. 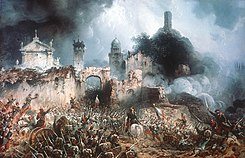 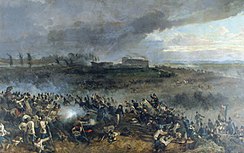 Around 5 am 2nd Corps under Mac-Mahon (two infantry divisions and a cavalry brigade under La Motterouge, Decaen and Gaudin) encountered Hungarian units posted near Ca’Morino (Medole). The Austrian forces were three corps strong (I, V and VII) and positioned on the towns of Solferino, Cavriana and Volta Mantovana. The Austrians were able to hold these positions all day against repeated French attacks. Near 3 pm the French reserves, formed by Canrobert’s 3rd Corps and the Imperial Guard under Regnaud, attacked Cavriana, which was defended by the Austrian I Corps under Clam-Gallas, finally occupying it at 6 pm and thereby breaking through the Austrian center. This breakthrough forced a general retreat of both Austrian armies.

On the northern side of the battlefield the Sardinians, 4 divisions strong, encountered the Austrians around 7 am. A long battle erupted over control of Pozzolengo, San Martino and Madonna della Scoperta. Although the Austrian VIII Corps under Benedek was numerically inferior, they were able to ward of all Sardinian attacks until the entire Austrian army retired from the field at the end of day.

The battle was a particularly gruelling one, lasting over nine hours and resulting in over 3,000 Austrian troops killed with 10,807 wounded and 8,638 missing or captured. The Allied armies also suffered a total of 2,492 killed, 12,512 wounded and 2,922 captured or missing. Reports of wounded and dying soldiers being shot or bayonetted on both sides added to the horror. In the end, the Austrian forces were forced to yield their positions, and the Allied French-Piedmontese armies won a tactical, but costly, victory. The Austrians retreated to the four fortresses of the Quadrilateral, and the campaign essentially ended.

Napoleon III was moved by the losses, as he had argued back in 1852 "the French Empire is peace", and for reasons including the Prussian threat and domestic protests by the Roman Catholics, he decided to put an end to the war with the Armistice of Villafranca (12 July 1859). The Piedmontese won Lombardy but not Venetia. Camillo Benso, conte di Cavour, resigned.[3] The Kingdom of Italy was proclaimed in 1861.

This battle would have a long-term effect on the future conduct of military actions. Jean-Henri Dunant, who witnessed the aftermath of the battle in person, was motivated by the horrific suffering of wounded soldiers left on the battlefield to begin a campaign that would eventually result in the Geneva Conventions and the establishment of the International Red Cross. The Movement organized the 150th anniversary commemoration of the battle between the 23 and 27 June 2009.[4] The Presidency of the European Union adopted a declaration on the occasion stating that "This battle was also the grounds on which the international community of States has developed and adopted instruments of International Humanitarian Law, the international law rules relevant in times of armed conflict, in particular the four Geneva Conventions of 1949, the 60th anniversary of which will be celebrated this year."[5]

The area contains a number of memorials to the events surrounding the battles.

At San Martino (now San Martino della Battaglia) there is a circular tower dominating the area, a memorial to Victor Emmanuel II. It is 70 m high and was built in 1893. In the town there is a museum, with uniforms and weapons of the time, and an ossuary chapel.

At Solferino there is also a museum, displaying arms and mementos of the time, and an ossuary, containing the bones of thousands of victims.

Nearby Castiglione delle Stiviere, where many of the wounded were taken after the battle, is the site of the museum of the International Red Cross, focusing on the events that led to the formation of that organization.

The ossuary of Solferino

The ossuary of Solferino

Elizabeth Barrett Browning's poem "The Forced Recruit at Solferino" commemorates this battle (Last Poems 1862). Joseph Roth's 1932 novel Radetzky March opens at the Battle of Solferino. There, the father of the novel's Trotta dynasty is immortalized as the Hero of Solferino.

The Battle of Solferino was depicted also in a 2006 television drama Henry Dunant: Du rouge sur la croix (English title: "Henry Dunant: Red on the Cross"), which tells the story of the signing of the Geneva Conventions and the founding of the Red Cross.