The Battle of Ortona (December 20–28, 1943)[1] was a small, yet extremely fierce, battle fought between a battalion of German Fallschirmjäger (paratroops) from the German 1st Parachute Division under Generalleutnant Richard Heidrich, and assaulting Canadian forces from the 1st Canadian Infantry Division under Major General Chris Vokes. It was the culmination of the fighting on the Adriatic front in Italy during "Bloody December". The battle, dubbed "Little Stalingrad"[5] for the deadliness of its close-quarters combat, took place in the small Adriatic Sea town of Ortona, with its peacetime population of 10,000.

The Eighth Army's offensive on the Winter Line defences east of the Apennine mountains had commenced on 23 November with the crossing of the river Sangro. By the end of the month, the main Gustav Line defences had been penetrated and the Allied troops were fighting their way forward to the next river, the Moro, 4 mi (6.4 km) north of the mouth of which lay Ortona. For the Moro crossing in early December the exhausted British 78th Infantry Division on the Allied right flank on the Adriatic coast had been relieved by Canadian 1st Infantry Division.[6] By mid-December, after fierce fighting in the cold and mud, the Division's 1st Infantry Brigade had fought its way to within 2 mi (3.2 km) of Ortona and was relieved by 2nd Infantry Brigade for the advance on the town.

Ortona was of high strategic importance, as it was one of Italy's few usable deep water ports on the east coast, and was needed for docking allied ships and so shorten Eighth Army's lines of supply which at the time stretched back to Bari and Taranto. Allied forces were ordered to maintain the offensive, and going through the built up areas in and around Ortona was the only feasible option. Ortona was part of the Winter Line defence system and the Germans had constructed a series of skilfully designed interlocking defensive positions in the town. This—together with the fact that the Germans had been ordered to "fight for every last house and tree"—[7][8] made the town a formidable obstacle to any attacking force.

The Canadians faced elements of the renowned German 1st Parachute Division. These soldiers were battle-hardened after many years of war, and were ordered by Adolf Hitler to defend Ortona at any cost. The initial Canadian attack on the town was made on December 20 by Canadian 2nd Brigade's Loyal Edmonton Regiment with elements of the Seaforth Highlanders of Canada under command.[8] Meanwhile elements of the division's 3rd Infantry Brigade launched a northerly attack to the west of the town in attempt to outflank and cut off the town's rear communications but made slow progress because of the difficult terrain and the skilful and determined German defence.

The Germans also concealed various machine guns and anti-tank emplacements throughout the town, making movement by armour and infantry increasingly difficult.[9] The house to house fighting was vicious and the Canadians made use of a new tactic: "mouse-holing". This tactic involved using weapons such as the PIAT (or even cumbersome anti-tank guns) to breach the walls of a building, as houses within Ortona shared adjoining walls.[9] The soldiers would then throw in grenades and assault through the mouse holes, clearing the top floors and making their way down, where both adversaries struggled in repeated close-quarters combat.[8] Mouse-holing was also used to pierce through walls into adjoining rooms, sometimes catching enemy troops by surprise. The tactic would be used repeatedly as assaulting through the streets inflicted heavy casualties on both Canadian and German troops. Later, in a particularly deadly incident, German Fallschirmjäger engineer Karl Bayerlein demolished an entire house packed with Canadian soldiers; only one soldier survived.[10] The Canadians retaliated by demolishing another building on top of two German squads, killing them all.

On 28 December, after eight days of fighting, the depleted German troops—who lacked reinforcements—finally withdrew from the town. The Canadians suffered 1,375 dead[3] in the fighting in and around Ortona, almost a quarter of all Canadians killed during the Italian Campaign. 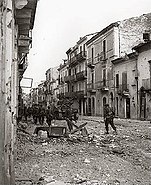 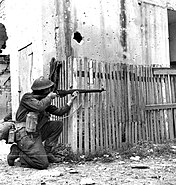