The Battle of Manila Bay took place on 1 May 1898, during the Spanish-American War. The American Asiatic Squadron under Commodore George Dewey engaged and destroyed the Spanish Pacific Squadron under Admiral Patricio Montojo. The battle took place in Manila Bay in the Philippines, and was the first major engagement of the Spanish-American War. The battle was one of the most decisive naval battles in history and marks the end of the Spanish colonial period in Philippine history.[7]

Americans living on the West Coast of the United States feared a Spanish attack at the outbreak of the Spanish-American War. Only a few U.S. Navy warships, led by the U.S.S. Olympia, stood between them and a powerful Spanish fleet.[7]

Admiral Montojo, a career Spanish naval officer who had been dispatched rapidly to the Philippines, was equipped with a variety of obsolete vessels. Efforts to strengthen his position amounted to little. The Spanish bureaucracy knew they could not win a war and saw resistance as little more than a face-saving exercise.[citation needed] Administration actions worked against the effort, sending explosives meant for naval mines to civilian construction companies while the Spanish fleet in Manila was seriously undermanned by inexperienced sailors who had not received any training for over a year.[8] Reinforcements promised from Madrid resulted in only two poorly-armored scout cruisers being sent while at the same time the authorities transferred a squadron from the Manila fleet under Admiral Pascual Cervera to reinforce the Caribbean. Montojo compounded his difficulties by placing his ships outside the range of Spanish coastal artillery (which might have evened the odds) and choosing a relatively shallow anchorage. His intent seems to have been to spare Manila from bombardment and to allow any survivors of his fleet to swim to safety. The harbor was protected by six shore batteries and three forts whose fire during the battle proved to be ineffective. Only Fort San Antonio Abad had guns with enough range to reach the American fleet, but Dewey never came within their range during the battle.[3][8]

At 7 p.m. on 30 April, Montojo was informed that Dewey's ships had been seen in Subic Bay that morning. As Manila Bay was considered unnavigable at night by foreigners, Montojo expected an attack the following morning. The American Consul in Manila, however, had provided Dewey with detailed information on the state of the Spanish defenses and the lack of preparedness of the Spanish fleet, prompting him to enter the bay immediately. At midnight Dewey, aboard the protected cruiser USS Olympia, led his squadron into Manila Bay. Passing the entrance, two Spanish mines exploded but were ineffective as they were well below the draft of any of the ships due to the depth of the water. Inside the bay, ships normally used the north channel between Corregidor Island and the northern coast and this was the only channel mined. Dewey instead used the unmined south channel between El Fraile and Caballo Islands. The El Fraile battery fired a few rounds but the range was too great. The McCulloch, Nanshan and Zafiro were now detached from the line and took no further part in the fighting. At 5:15 a.m. on 1 May, the squadron was off Manila and the Cavite battery fired ranging shots. The shore batteries and Spanish fleet then opened fire but all the shells fell short as the fleet was still out of range.[8] At 5:41 with the now famous phrase, "You may fire when ready, Gridley,"[10] the Olympia's captain was instructed to begin the destruction of the Spanish flotilla.[9]

The U.S. squadron swung in front of the Spanish ships and forts in line ahead, firing their port guns. They then turned and passed back, firing their starboard guns. This process was repeated five times, each time closing the range from 5,000 yards to 2,000 yards. The Spanish forces had been alerted, and most were ready for action, but they were heavily outgunned. Eight Spanish ships, the land batteries, and the forts returned fire for two and a half hours although the range was too great for the guns on shore. Five other small Spanish ships were not engaged.

Montojo accepted that his cause was hopeless and ordered his ships to ram the enemy if possible. He then slipped the Cristina’s cables and charged. Much of the American fleet's fire was then directed at her and she was shot to pieces. Of the crew of 400, more than 200, including Montojo, were casualties and only two men remained who were able to man her guns. The ship managed to return to shore and Montojo ordered it to be scuttled. The Castilla, which only had guns on the port side, had her forward cable shot away causing her to swing about, presenting her weaponless starboard side. The captain then ordered her sunk and abandoned. The Ulloa was hit by a shell at the waterline that killed her captain and disabled half the crew. The Luzon had three guns out of action but was otherwise unharmed. The Duero lost an engine and had only one gun left able to fire.[8]

At 7:45 a.m., after Captain Gridley messaged Dewey that only 15 rounds of 5" ammunition remained per gun, he ordered an immediate withdrawal. To preserve morale, he informed the crews that the halt in the battle was to allow the crews to have breakfast.[9] According to an observer on the Olympia, At least three of his (Spanish) ships had broken into flames but so had one of ours. These fires had all been put out without apparent injury to the ships. Generally speaking, nothing of great importance had occurred to show that we had seriously injured any Spanish vessel. Montojo took the opportunity to now move his remaining ships into Bacoor Bay where they were ordered to resist for as long as possible.[8]

A captains' conference on the Olympia revealed little damage and no men killed. It was discovered that the original ammunition message had been garbled - instead of only 15 rounds of ammunition per gun remaining, the message had meant to say only 15 rounds of ammunition per gun had been expended. During the conference reports arrived that sounds of exploding ammunition had been heard and fires sighted on the Cristina and Castilla. At 10:40 AM action was resumed but the Spanish offered little resistance and Montojo issued orders for the remaining ships to be scuttled and the breechblocks of their guns taken ashore. The Olympia, Baltimore and Boston then fired on the Sangley Point battery putting it out of action and followed up by sinking the Ulloa. The Concord fired on the transport Mindanao, whose crew immediately abandoned ship. The Petrel fired on the government offices next to the arsenal and a white flag was raised over the building after which all firing ceased.[8] The Spanish colors were struck at 12:40 PM.

According to American sources, Dewey won the battle[9] with seven men very slightly wounded,[11] a total of nine injured, and only a single fatality among his crew: Francis B. Randall, Chief Engineer on the McCulloch, from a heart attack.[12] On the other hand, the Spanish naval historian Agustín Ramón Rodríguez González suggests that Dewey suffered heavier losses, though still much lower than those of the Spanish squadron.[6] Rodríguez notes that Spanish officials estimated the American casualties at 13 crewmen killed and more than 30 wounded based on reliable information collected by the Spanish consulate in Hong Kong.[6] According to Rodríguez, Dewey may have concealed the deaths and injuries by including the numbers amongst the 155 men who reportedly deserted during the campaign.[6] As most of the low-ranked crewmen were not American citizens (with many of them being of Asiatic origin), this would have been easy to do.[6]

A Spanish attempt to attack Dewey with the naval task force known as Camara's Flying Relief Column came to naught, and the naval war in the Philippines devolved into a series of torpedo boat hit-and-run attacks for the rest of the campaign. While the Spanish scored several hits, there were no American fatalities directly attributable to Spanish gunfire.

On 2 May, Dewey landed a force of Marines at Cavite. They completed the destruction of the Spanish fleet and batteries and established a guard for the protection of the Spanish hospitals. The resistance of the forts was weak. The Olympia turned a few guns on the Cavite arsenal, detonating its magazine, and ending the fire from the Spanish batteries.

In recognition of George Dewey's leadership during the Battle of Manila Bay a special medal known as the Dewey Medal was presented to the officers and sailors under Admiral Dewey's command. Dewey was later honored with promotion to the special rank of Admiral of the Navy; a rank that no one has held before or since in the United States Navy. Building on his popularity, Dewey briefly ran for president in 1900, but withdrew and endorsed William McKinley, the incumbent, who won.

Dewey's flagship, the Olympia, was preserved as a museum ship in Philadelphia, Pennsylvania, at the Independence Seaport Museum (formerly the Philadelphia Maritime Museum). However, in 2011 the Independence Seaport Museum launched an effort to identify new stewards for the Cruiser and announced that the Cruiser will be scrapped or scuttled unless a new owner can be found.[13][14][15]

Despite the superiority of the American artillery, the success rate of their guns was minimal, a total of 5,859 shells were expended during the battle. Excluding shells fired at land targets and the unengaged vessels, only 145 hit the seven Spanish engaged vessels. The Reina Cristina and Castilla suffered 81 hits between them, the Don Antonio de Ulloa was hit 33 times, the Don Juan de Austria 13, the Marques del Duero 10, the Isla de Cuba five and the Isla de Luzón was hit three times.[6]

The Spanish vessels had 19 torpedo tubes between them but no serviceable torpedoes.

The batteries were supplemented with the guns removed from Montojo's fleet. The Corregidore, Caballo and El Fraile batteries had a combined total of 17 guns.

Dispatches between Dewey and the Secretary of the Navy

Multiple dispatches were exchanged between Dewey and John D. Long, Secretary of the Navy, immediately prior to, and following, the Naval Battle of Manila Bay. One dispatch notified Dewey of his promotion to the acting grade of Rear Admiral:[16]

HONGKONG, May 7, 1898. (Cavite, May 4.)
SECRETARY OF THE NAVY, Washington:
I have taken possession of the naval station at Cavite, Philippine Islands, and destroyed its fortifications. Have destroyed fortifications bay entrance, paroling garrison. Have cut cable to main land. I control bay completely and can take city at any time, but I have not sufficient men to hold. The squadron excellent health and spirits. The Spanish loss not fully known; very heavy; 150 killed, including captain, on Reina Cristina, alone. I am assisting and protecting Spanish sick and wounded, 250 in number, in this hospital, within our lines. Will ammunition be sent? I request answer without delay. I can supply squadron coal and provisions for a long period. Much excitement at Manila. Scarcity of provisions on account of not having economized stores. Will protect foreign residents.
DEWEY.

WASHINGTON, May 7, 1898.
DEWEY (care American consul), Hongkong:
The President, in the name of the American people, thanks you and your officers and men for your splendid achievement and overwhelming victory. In recognition he has appointed you acting rear admiral, and will recommend a vote of thanks to you by Congress as a foundation for further promotion. The Charleston will leave at once with what ammunition she can carry. Pacific Mail Steamship Company steamer Pekin will follow with ammunition and supplies. Will take troops unless you telegraph otherwise. How many will you require? 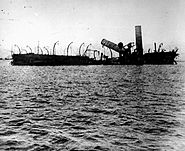 Wreck of the Regina Cristina

Wreck of the Castilla

Wreck of the Isla de Cuba

Wreck of the Isla de Luzon

Wreck of the Velasco