View source
For the Philippine-American War battle of the same name, see Battle of Manila (1899).

The Battle of Manila was a short land engagement between the United States and Spain at the end of the Spanish–American War and the Philippine Revolution, which occurred a couple of months after the pivotal American victory during the naval Battle of Manila Bay. The battle was jointly planned by the opposing Spanish and American forces to keep the city from falling to the Philippine Revolutionary Army under President General Emilio Aguinaldo.[1]

After the American victory in Manila Bay over two months earlier, the U.S. Navy, under Admiral George Dewey, had blockaded the city of Manila and waited for land forces to arrive. The United States reacted by organizing the VIII Corps, dubbed the Philippine Expeditionary Force under the command of Major General Wesley Merritt.[2] On May 16, the vanguard of the force left San Francisco under the command of Brigadier General Thomas M. Anderson.[3] Merritt, on the same day, asked for information concerning the strength of the Spanish in the Philippines. The American consul in Hong Kong gave the information needed: 21,000 men including 4,000 Filipinos, all except 1,000 of them in Manila.[4] Dewey, however, sent more accurate information: around 40,000 troops including around 16,000 Filipinos, about 15,000 were situated in Manila, and 9 artillery guns in Manila.[4] By mid-June, some 30,000 Filipino troops under General Antonio Luna had dug fourteen miles of trenches around Manila. Filipino troops, seizing control of Manila's only pumping station, cut off the water supply to the city.[5]

The first contingent of American troops arrived in Cavite on June 30, the second under General Francis V. Greene on 17 July, and the third under General Arthur MacArthur on 30 July.[6] By this time, some 12,000 U.S. troops had landed in the Philippines.[7]

Aguinaldo had presented surrender terms to Spanish Governor General Basilio Augustín, who had refused them.[8] Augustín had thought that if he really needed to surrender the city, he would do so to the Americans. On 16 June, warships departed Spain to lift the siege, but they altered course for Cuba where a Spanish fleet was imperiled by the U.S. Navy.[9] Life in Intramuros (the central core of Manila), where the normal population of about ten thousand had swelled to about seventy thousand, had become unbearable. Realizing that it was only a matter of time before the city fell, and fearing vengeance and looting if the city fell to the Filipinos, Governor Augustín had suggested to Dewey that the city be surrendered to the Americans after a sham battle. Dewey had initially rejected the suggestion because he lacked the troops to block Filipino forces, but when Merritt's troops became available he sent a message to Fermin Jáudenes, Augustín's replacement, agreeing to the mock battle. Spain had learned of Augustín's intentions to surrender Manila to the Americans, which had been the reason he had been replaced by Jaudenes.[10]

Merritt was eager to seize the city, but Dewey stalled while maneuvering to work out a bloodless solution with Jaudenes.[10] On 4 August, Dewey and Merritt gave Jaudenes 48 hours to surrender; later extending the deadline by five days when it expired.[10] Covert negotiations continued, with the details of the mock battle being arranged on 10 August. The plan agreed to was that Dewey would begin a bombardment at 09:00 on 13 August, shelling only Fort San Antonio Abad, a decrepit structure on the southern outskirts of Manila, and the impregnable walls of Intramuros. Simultaneously, Spanish forces would withdraw, Filipino forces would be checked, and U.S. forces would advance. Once a sufficient show of battle had been made, Dewey would hoist the signal "D.W.H.B." (meaning "Do you surrender?[11]), whereupon the Spanish would hoist a white flag and Manila would be formally surrendered to U.S. forces.[12]

On August 13, with American commanders unaware that a peace protocol had been signed between Spain and the U.S. the previous day, Dewey began his bombardment as scheduled. Dewey had directed his ship captains to spare Manila any serious damage but gunners on one ship, unaware of the negotiated arrangements, scored several direct hits before its captain was able to cease firing and withdraw from the line.[13]

General Greene's brigade pushed rapidly through Malate and over the bridges to occupy Binondo and San Miguel. The advancing Americans made good use of new weapons, such as the M1897 Trench Gun which was ideal for close combat. General Arthur MacArthur, advancing simultaneously on the Pasay road, encountered and overcame resistance at the blockhouses, trenches, and woods in his front, advanced and held the bridges and the town of Malate. This placed Manila in American possession, except for Intramuros. Shortly after entering Malate, U.S. troops observed a white flag displayed on the walls of Intramuros. Lieutenant Colonel C. A. Whittier, United States Volunteers, representing General Merritt, and Lieutenant Brumby, U.S. Navy, representing Admiral Dewey, were sent ashore to communicate with the Captain-General. General Merritt soon personally followed, met with Governor General Jaudenes, and concluded a preliminary agreement of the terms of capitulation.[14]

Though a bloodless sham battle had been planned, Spanish troops had opened fire in a skirmish which left six Americans and forty-nine Spaniards dead when Filipino troops, thinking that the attack was genuine, joined advancing U.S. troops.[15] Except for the unplanned casualties, the battle had gone according to plan; the Spanish had surrendered the city to the Americans, and it had not fallen to the Filipinos.[16]

For all practical purposes, the fall of Manila brought about the end of the Spanish-American War in the Philippines. Merritt and Dewey finally received word of the peace protocol on August 16.[17] Captain Henry Glass of the armored cruiser USS Charleston had accepted the surrender of Guam on June 20, 1898, while en route to Manila,[18] and Captain E.D. Taussig of the gunboat USS Bennington claimed Wake Island for the U.S. on January 17, 1899.[19]

The war with Spain came to an end, but shortly afterwards another war broke out. Tensions between the Filipino forces under Aguinaldo and the American Expeditionary forces was high. The Filipinos felt betrayed by the Americans. They had looked on the Americans as liberators against Spanish occupation, but later came to believe that the US simply wanted to make the Philippines a colony of its own. In an incident on February 4, 1899, a U.S. Army private fired on a Filipino guerilla and Filipino forces returned fire. Thus began a second battle for the city. Aguinaldo sent a ranking member of his staff to Ellwell Otis, the U.S. military commander, with the message that the firing had been against his orders. Otis replied, "The fighting, having begun, must go on to the grim end."[20] 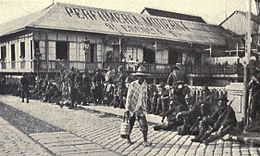 Photo of American soldiers guarding a bridge over the Pasig River after the battle, August 13, 1898

"Raising the American flag over Fort Santiago, Manila, on the evening of August 13, 1898." drawing from Harper's Pictorial History of the War with Spain.

Photo with the caption "Insurgent (Filipino) soldiers in the Philippines, 1899".