Military Wiki
Register
Don't have an account?
Sign In
Advertisement
in: Articles incorporating text from Wikipedia, Battles of the Austro-Prussian War, Battles involving Prussia, Conflicts in 1866

View source
For other uses, see Battle of Langensalza. 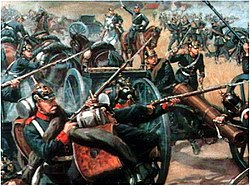 The Battle of Langensalza was fought on 27 June 1866 near Bad Langensalza in what is now modern Germany, between the Kingdom of Hanover (Hanoverians) and the Prussians. The Hanoverians won the battle but were then surrounded by a larger and reinforced Prussian army, and, unable to link up with their Bavarian allies to the south, they surrendered. This marked the demise of the Hanoverian Army and the annexation of Hanover into the burgeoning kingdom of Prussia as it systematically unified Germany into the modern nation state.

After declaring that he felt “trapped, like a fox indoors… (with) no choice but to bite my way out,”1 Prussia’s King Wilhelm I initiated the Austro-Prussian War to conquer and unite a majority of the Germanic principalities. Many small German states existed prior to 1866, and, in anticipation of war, they allied themselves with either Austria or Prussia depending on their desires and goals. Most kingdoms surrounding Prussia allied with Austria in fear of losing their autonomy to the Prussian state. This in turn boxed Prussia against the Baltic Sea, prompting the King to make the above “trapped fox” statement. King George V of Hanover believed he could negotiate independently with the Austrians and Prussians, wasting time when he could have strengthened his forces by joining other German states. When he finally attempted to do so, it was too late. In a show of the Hanoverian naïveté, George's Foreign Minister declared that Bismarck would never break federal law, which insisted on maintaining a six week interval before invading another land.2 On 15 June 1866, King Wilhelm ordered Hanover, Saxony, and Kassel to disarm at once, effectively beginning the war with Austria’s allies.3 On 16 June, Prussian forces began moving against all three German states, with those of General August Karl von Goeben approaching Hanover.

Hanover began in an excellent position as the Prussian attack happened to occur during Hanoverian summer exercises and their army was already mobilized. Realizing the vast size of the total Prussian force, King George directed his 19,000 man army under General Alexander von Arentschildt to quickly withdraw and march south to link up with Bavarian allies.4 Prussia pressed 40,000 total troops into Hanover, which then split into four detachments under Generals Falckenstein, Goeben, Flies, and Beyer. General von Falckenstein, recognizing the absence of an army to fight, marched unopposed into the Hanoverian capital, north of the marching Hanoverians. General Helmuth von Moltke, the Prussian theater commander, also ordered Goeben to the north, and in turn deployed Beyer to the Hanoverians’ south and Flies, with 9,000 troops, quickly marched around to the west. This formed a box around the Hanoverian army with Prussia itself forming the Eastern side.5 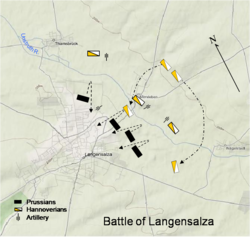 Moltke ordered Flies to hold fast and intercept Hanoverians trying to break through westward as Falckenstein’s force performed the main Prussian assault from the north. In direct defiance of his orders, General Flies gathered his detachment and directly attacked the Hanoverian army.6, 7 Following a feint toward Thamsbruck to the North, the Prussian forces under Flies made a concentrated assault toward Merxleben. The much larger Hanoverian force and artillery fire drove them back toward the actual city of Langensalza. Having a force more than twice the Prussian detachment’s size, Arentschildt severely routed Flies’ troops, capturing more than 900 men.

Although the Hanoverians attained a decisive victory in the actual battle, the fighting halted their movement and allowed the other Prussian forces from the north and south to converge on the battle site. Out of options, King George and the Hanoverians pulled back to the East, further from their Bavarian allies. Pinned down against the Harz Mountains and out of options, King George surrendered in Nordhausen two days after the battle.8

The Battle of Langensalza was a near disaster in the Hanoverian campaign for the Prussians. It wiped out Flies’ detachment of troops and could have allowed an avenue of escape for the Hanoverian army. At the same time, this battle provided just enough time for the northern and southern Prussian contingents to link up at the battle site, which ultimately forced Hanoverian surrender.

Langensalza was an important aspect of the Austro-Prussian War as it led to a quick Prussian occupation of Hanover, both taking the Austrians by surprise and greatly weakening their position in the war. The Prussians also quickly overran Kassel and Saxony at the same time they were attacking Hanover. All together these small states could have contributed more than 100,000 good troops to Austria’s cause, but they were destroyed before they could unite and fight jointly.9 If the Hanoverians had successfully reached other allies on the Austrian's side, the Austro-Prussian War may have gone very differently.

Another long lasting result of the Battle of Langensalza is the use of the "Red Cross" by medical personnel. Created by the First Geneva Convention in 1864, the Red Cross began an international humanitarian aid group. This organization, which would later greatly expand in size, was originally very small. Involving just thirty trained volunteer nurses from Gotha, the first actual combat mission of the Red Cross occurred on the Prussian side at Langensalza. Although Austria and Hanover were not involved at the time, in 1866 Prussia was a member of the Red Cross Convention. Prussian medical personnel worked on the battlefield wearing the sign of the Red Cross on their arms and providing critical aid to wounded soldiers.10 Their legacy continues today in the form of the International Red Cross.