The battle was fought between 40,000 French under General Louis Faidherbe and 22,500 Prussian troops under Edwin Freiherr von Manteuffel. The French lost heavily in the village lying in front of their position. However, the Prussians were unable to carry the entrenchments on the heights. After the attack was repulsed, the French assumed the offensive, but with no decisive result. One thousand French soldiers were killed, and 1,300 were imprisoned. About 927 German troops were killed and wounded.

After the fall of Amiens, on September 27, 1870 and its occupation by the Prussian Army, the French Northern Army, falls back towards Doullens and Bapaume to built it up its strength again. It receives fresh supply of troops, allowing to turn out three Divisions.

General Faidherbe, lately entrusted with the command of this Army, gives at once guiding rules and orders. He sends general Lecointe towards Saint-Quentin with mission to act on the Haute Somme. Four battalions, including one of light-infantry and a battery of 4, succeed, on September 9, in taking possession of Ham and its fortress. Faifherbe, coming on the place, gives order to withdraw an go towards Amiens.

On December 17, the Northern Army, regrouped, comes settling to the Hallue valley from Bavelincourt to Daours. The troops (about 43000 men) are divided into two Army Corps :

These troops are billeting in all the villages of the valley and outposts settled on a line passing through the woods of Saint-Gratien, Allonville and Querrieu (La Gorgue).[1][2][3] 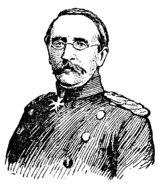 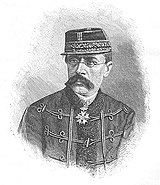 General-Major von Mirus in command of the 6th cavalry Brigade staying in Amiens for two days, sends a strong reconnaissance party consisting in a cavalry troop, an infantry battalion and a field artillery battery, to Querrieu village.

Reaching the La Gorgue[5] wood skirt, the party knocks against a French outpost and, sustained by its artillery, joins a lengthy battle.

Two French battalions strenuously fight back, so much that general Du Dessol launches three companies coming from Bussy-lès-Daours to the right flank of the enemy who is constrained to a withdrawal towards the Alençons farm, then to Amiens.

In this battle Prussians lose 3 officers and 69 men killed or wounded ; French casualties are of 7 dead and 20 wounded.[6]

Succeeding to general Steinmetz, general Manteuffel, recently appointed at the head of the 1st Prussian Army, arrives in Amiens on December 22 and gives offensive order for the next day at 8 a.m. :

The battle is going to stretche out a front line of 12 kilometres wide and 4 to 5 kilometres deep, on a snow covered ground and an icy temperature increased by a wind blowing from the north.[7]

The French are using the Chassepot model 1866, breech-loading gun, with paper cartridges and 11 millimetres bullets.[8]

The Prussians are using the Dreize created in 1848, breech-loading gun, with paper cartridges and 15 millimetres bullets.

Chassepot : details of breech and ammunition

detail of the ammunition

The French are using cannons made in bronze dating of the Napoleonic period, loading from the muzzle, and iron inner-tubes ones, model 1858. They also use canons à balles (machine-guns) able to project 25 bullets.

The Prussians are using Krupp breech-loading cannons and shrapnel shells.[9]

The 8th Prussian Corps starts on its way on December 23 at 8 a.m. The 15th Division has received order to reject French troops beyond the Hallue river, but not to venture on the left bank until the effect of an outflanking motion of the 16th Division, more on the north, will be felt. Therefore, the 15th Division moves towards Allonville, followed by three horse field artillery and artillery corps, then turns to Querrieu. French outposts withdraw to the river, giving the alarm to the troops located in the back.

Battle in the dusk

On 4 p.m. night is about to fall. The Prussians keep under control the right side of the river and Pont-Noyelles village. Their turning movement on the north has failed and their troops are threatened by the Aynes Brigade of the Derroja Division, coming into sight on the south-east of Contay, marching to Beaucourt. At that time, general Faidherbe, gives attack order on all the front line. This attack will continue from 4 to 6 p.m. :

On the next day, December 24 at 9 a.m. the French artillery launches a cannonade to Béhencourt without any Prussian reply. General Faidherbe makes up his mind to retreat. The withdrawal, protected by a line of retarding units, begins at about 2 p.m. The Prussians will only start the pursuit on the following day December 25 ; at that time, the French Army is arriving near Bapaume.

A war memorial named "Colonne Faidherbe" was erected in 1875, on the heights of Pont-Noyelles, on the place where general Faidherbe directed the last combats.

An ossuary contains the bodies of 74 soldiers killed during the battle in and around Pont-Noyelles.

On every village of the valley, many soldiers' bodies lie in their communal cemeteries.