Battle of Gospić (Croatian language: Bitka za Gospić ) was fought in and around Gospić, Croatia, as a part of the Croatian War of Independence, from 29 August until 22 September 1991. The battle pitted the Yugoslav People's Army (JNA) stationed in five barracks in the town and paramilitaries of the Serbian Guard against the Croatian National Guard (ZNG) and the police forces based in Gospić and sent as reinforcements from other parts of Croatia. Initially, the JNA, supported by its artillery, controlled the eastern part of Gospić in a conflict that was fought as a static battle within the city. As the Croatian forces captured several JNA storage depots and barracks—in what was later known as the Battle of the Barracks—on 14 September, the balance started to shift as the ZNG received captured weapons. In consequence, the remaining JNA barracks in Gospić were captured by 20 September and the JNA and the Serbian Guard were pushed back out of the town.

The battle followed escalating ethnic tensions in the Lika region, including attacks on Croatian civilians in Lovinac, an attack on a Croatian police checkpoint in Žuta Lokva, and comparably small-scale fighting at the Plitvice Lakes and the Ljubovo Pass on the Gospić–Plitvička Jezera road. The remainder of 1991 saw further deterioration of the situation in the region, resulting in war crimes agains Serbs and Croats in Gospić and Široka Kula massacres. Military conflict in the region continued through further fighting which produced little territorial changes, before a more lasting ceasefire was produced by the Sarajevo Agreement of 2 January 1992.

In August 1990, an insurrection took place in Croatia centred on the predominantly Serb-populated areas of the Dalmatian hinterland around the city of Knin,[1] as well as in parts of the Lika, Kordun, and Banovina regions, and settlements in eastern Croatia with significant Serb populations.[2] The areas were subsequently named SAO Krajina (Serb Autonomous Oblast) and, after declaring its intention to integrate with Serbia, the Government of Croatia declared it to be a rebellion.[3] By March 1991, the conflict escalated into the Croatian War of Independence.[4] In June 1991, Croatia declared its independence as Yugoslavia disintegrated.[5] A three-month moratorium followed,[6] after which the decision came into effect on 8 October.[7] The SAO Krajina, renamed Republic of Serbian Krajina (RSK) on 19 December, then initiated a campaign of ethnic cleansing against Croatian civilians.[8]

As the Yugoslav People's Army (JNA) increasingly supported the SAO Krajina and the Croatian Police was unable to cope with the situation, the Croatian National Guard (ZNG) was formed in May 1991.[9] The development of the military of Croatia was hampered by a UN arms embargo introduced in September,[10] while the military conflict in Croatia continued to escalate—the Battle of Vukovar started on 26 August.[11] 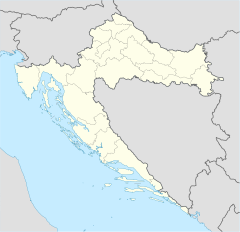 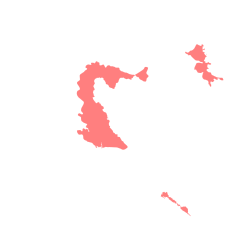 Plitvička Jezera
Gospić on the map of Croatia. RSK and Yugoslav Army-held area near Dubrovnik in early 1992 are highlighted red.

An already tense situation in the Lika region, following the 1 April Plitvice Lakes incident, when the first fatalities of the Croatian War of Independence occurred,[12] deteriorated further in June when Croatia reaffirmed its sovereignty through a parliamentary declaration. The deterioration reflected itself through a rise of violent incidents, setting up of unauthorized road checkpoints and occasional small arms fire. On 22 June, three policemen were abducted on the road between Gospić and SAO Krajina-controlled Gračac, and a series of attacks on the Croatian police occurred in various parts of Lika, including Gospić, on 27–28 June.[13] In July 1991, the JNA started to openly confront the Croatian police and the ZNG in Lika. On 1 July, Plitvice police station was surrounded by the JNA, and on 6 July, two ZNG troops were killed and another two wounded in a JNA ambush near Gospić. Further escalation of the fighting was seen at the Ljubovo pass on the Gospić–Korenica road, where the JNA and SAO Krajina troops fought and pushed the ZNG back on 28–29 July.[14]

Ethnic violence continued to escalate when Serb paramilitaries abducted and killed five Croatian civilians from Lovinac in southern Lika on 5 August,[15] and a police checkpoint in Žuta Lokva was attacked.[16] In early August, the JNA moved a company of the 4th Armoured Brigade, previously deployed to the Ljubovo pass, to Gospić, in order to reinforce its garrison in the town—the 236th Proletarian Motorized Brigade (a brigade in name only, the 236th was actually only a company-sized unit). The SAO Krajina troops attacked and captured the Plitvice police station on 30 August. As the successful capture of Plitvice became imminent, and as the ZNG pulled out of Lički Osik, located 8 kilometres (5.0 miles) north of Gospić, on 31 August, the SAO Krajina and the JNA shifted their focus in Lika to Gospić itself,[17] where Serbs comprised 38.4% of the total population of 12,000.[18]

The JNA forces consisted of the garrison of the Stanko Opsenica barracks in Gospić—70 officers and 200 soldiers,[19] and four smaller JNA facilities in the town.[20] The garrison was supported by Serbian Guard paramilitaries led by Đorđe Božović. The paramilitary unit deployed to Gospić from Serbia using JNA transportation,[21] fielding 128 troops, according to an interview with the commanding officer of Territorial Defence in southern Lika in 1991.[22] The JNA units based in Gospić following a reorganization in 1990 were the 236th Motorized Brigade and the 1st Brigade of the 35th Partisan Division, both subordinated to the Rijeka Corps. Prior to the reorganization, Gospić was garrisoned by the 10th Proletarian Infantry Regiment—a B-class unit required to maintain only 15% of wartime troop levels. In the reorganization process, the 10th Regiment was amalgamated with the 9th Proletarian Infantry Regiment to form the 236th Motorized Brigade.[23] The JNA garrison in Gospić was formally commanded by Colonel Petar Čavar, however effective command was taken over by his chief of staff, Yugoslav Counterintelligence Service Major Relja Tomić.[18]

In early September, Croatian forces in Gospić comprised 427 troops, largely drawn from police forces based in Gospić, Rijeka and Zabok, volunteers from Gospić, Zagreb and Senj as well as Croatian Defence Forces troops.[24] The ZNG force in Gospić consisted of the 118th Infantry Brigade. The brigade started to form around the ZNG 58th Independent Battalion on 14 August—but it would not be fully assembled until after October. In addition, the brigade failed to establish cooperation with the Karlovac Corps, to which it was formally subordinated. By mid-September, the brigade comprised two battalions—one of them comprising four companies and the other one three. The 118th Infantry Brigade was commanded by Lieutenant Colonel Mirko Norac,[25] while the head of the Croatian police in Gospić was Ivan Dasović.[24]

The JNA and the Serb paramilitary force started artillery bombardment of Gospić from positions held in the village of Divoselo and the JNA Jasikovac Barracks on 29 August 1991. Intensity of the artillery attacks increased significantly towards mid-September, causing significant damage in Gospić. A SAO Krajina report of the attack estimated that more than 50% of structures in the city were damaged.[20] At the outset of the battle, the JNA and the paramilitaries pushed the Croatian force out of the eastern part of Gospić.[24]

On 5 September, Croatian forces captured JNA Major General Trajče Krstevski, along with three armoured personnel carriers (APCs) and 32 soldiers, when he attempted to reach JNA barracks that were isolated in the centre of the town. The next day, an exchange of prisoners of war (POWs) was successfully negotiated. The Croatian commanders in Gospić declined a request that the APCs also be returned—contrary to the instructions of Croatian authorities in Zagreb. Following the capture of Krstevski, the JNA artillery bombardment was stepped up, averaging 1,100 artillery shells per day. Nonetheless the second week of the battle produced a stalemate, without any changes of lines of control.[18]

The ZNG and Croatian police planned to cut power, water and communications to all JNA facilities in the government-controlled part of Croatia on 14 September.[26] In Gospić, this action was brought forward to 13 September, the same day that the ZNG captured a JNA storage facility. This provided the Croatian troops with 14,000 rifles and a substantial quantity of antitank weapons.[18] The move provided sufficient arms and ordnance for Croatian forces to match the JNA in the town.[17] The JNA barracks in Perušić and Kaniža Barracks in Gospić were captured the following day. The bulk of the JNA garrison in Gospić surrendered on 18 September,[18] following three days of fighting for the Stanko Opsenica Barracks.[19] An infantry attack aiming to support the JNA garrison was successfully repelled by Croatian forces on 16 September in the Divoselo area,[27] where Božović was killed.[18] After the city centre became relatively secure, the Croatian forces extended their offensive, capturing the Jasikovac Barracks and relieving two Croatian-held pockets in villages of Ribnik and Bilaj by 20 September.[27] As the JNA surrendered, the Serb forces retreated from the eastern parts of Gospić to a line 8 kilometres (5.0 miles) in front of Medak,[17] as the Croatian forces completed mopping up in Gospić by 22 September.[28]

Croatia captured approximately 300 JNA officers and soldiers, who were taken to Rijeka after their capture.[18] They were later exchanged for Croatian POWs captured by the JNA in the Battle of Vukovar and elsewhere in Croatia.[19] A large quantity of small arms and ammunition was captured as well as seven tanks and twelve 120-millimetre (4.7 in) mortars.[29] After the battle, the artillery bombardment of Gospić continued from positions around Divoselo and Lički Čitluk, approximately 5 to 8 kilometres (3.1 to 5.0 miles) south of Gospić.[30] Comparably small scale fighting in Lika continued until January 1992 as the belligerents sought to improve their positions on the ground, especially around Gospić and Otočac.[28] A further Croatian advance to the south was stopped by the JNA and the SAO Krajina forces on 23 September defending a JNA storage depot in Sveti Rok using an infantry battalion and the Krajina Express armoured train.[31] The JNA fully secured the depot and captured Lovinac on 26 September. By the end of September, Croatian defensive positions around Otočac were shored up, allowing minor attacks—largely in area of village of Drenov Klanac.[32] In late October and early December, fighting was intensified around Divoselo near Gospić, but no territory changed hands.[33] The intensity of artillery bombardment of Gospić peaked on 1 November 1991, when 3,500 artillery shells struck the town.[27] In December, the JNA Knin Corps proposed to the JNA General Staff to advance from Gračac in an attempt to capture Gospić and Otočac, but signing of the Sarajevo Agreement and ceasefire of 2 January 1992 largely halted further fighting,[34] until the commencement of Operation Medak Pocket in September 1993.[35]

The continuing military confrontation in the region was accompanied by escalation of ethnic violence, culminating in war crimes against civilians committed by military authorities in Gospić and the SAO Krajina military in the area around Lički Osik in October 1991. In Gospić, approximately 50 Serb civilians were taken from the town and killed in the surrounding fields. The individuals responsible for the event, later known as the Gospić massacre, were prosecuted by Croatian judiciary. This resulted in the conviction, in 2003, of Norac and two other defendants to 12 years in prison.[36] The killings in the Lički Osik area, known as the Široka Kula massacre, targeted 40 civilians, largely Croats but also Serbs suspected of supporting Croatia.[37] In 2011, a court in Belgrade, Serbia, convicted four former SAO Krajina militiamen for killing of four Serbs and a Croat in Široka Kula.[38]