Military Wiki
Register
Don't have an account?
Sign In
Advertisement
in: Articles incorporating text from Wikipedia, Battles of the English Civil Wars, Military history of Lincolnshire,
and 3 more

The Battle of Gainsborough was a battle in the English Civil War, fought on 28 July 1643.

When the English Civil War was declared, Gainsborough in Lincolnshire lay in an area which supported Parliament, but the town itself had Royalist sympathies. The town was of strategic importance to both sides, sited as it was on a crossing of the River Trent, lying on important roads leading south and north. In March 1643 Sir John Henderson sent a raiding party from the Royalist base at Newark to capture Gainsborough for the King. The town was surrounded and quickly surrendered without any resistance.

The town was put into the charge of the Earl of Kingston and was used as a base to harass the Parliamentarians in Lincolnshire. Royalist attacks at Louth and Market Rasen, together with the capture of gunpowder intended for Rotherham, provoked Parliament into action. Lord Willoughby of Parham launched a surprise night attack on Gainsborough on 16 July 1643 and captured it. The Earl of Kingston was later killed by a cannonball from his own men as he was being taken as prisoner down the river to Hull.

Willoughby's triumph was short-lived. The Royalists immediately sent Charles Cavendish with a force to retake Gainsborough. Parliament sent forces from Nottingham under Sir John Meldrum and Colonel Oliver Cromwell from Cambridgeshire to relieve and reinforce the town. The two forces met on 27 July at North Scarle, ten miles south of Gainsborough, where they were joined by a detachment from Lincoln.

The next day, 28 July 1643, the 1200 strong force marched north. At the village of Lea, just south of Gainsborough, they met an advanced guard of 100 horse, part of Cavendish's army. After a short skirmish the horsemen were driven back to Cavendish's main body which was drawn up on top of Foxby Hill to the east of the town. The Royalists consisted of three regiments of Horse with a further regiment in reserve, and they had the strategic advantage. The Lincoln troops were ordered to advance up the steep and sandy gradient, and upon reaching the top they came face to face with the Royalist Horse. As the Lincolners were forming up, Cavendish attacked. Cromwell, seeing this, charged with his own cavalry to meet Cavendish. After some fierce horse to horse fighting, the Royalist Horse gradually began to fall back, eventually fleeing from the battlefield pursued by the Parliamentary cavalry.

With the Parliamentary Horse gone, Cavendish took advantage by counter-attacking the remaining Lincoln troops with his reserve regiment. But Cromwell was still on the field with a reserve of three troops of Horse. He charged into Cavendish's rear, forcing the Royalists down the hill and into the flat marshy land of the Trent, where 300 Royalists were slaughtered. Cavendish was knocked off his horse and killed by a sword thrust in the chest. The place where he was killed was later known as Cavendish Bog.

With the battle over, Cromwell rode into Gainsborough with supplies for Willoughby's garrison. While this was being done, news arrived that a small Royalist force was marching on Gainsborough from the north. Cromwell and Meldrum, thinking this was a remnant of Cavendish's force not yet engaged, rode out to meet them with 600 of Willoughby's foot soldiers.

At Morton they drove off two troops of Horse. Then climbing a hill, they were shocked to discover the army of Lord Newcastle consisting of about 30 regiments of Foot and a great body of Horse, who were marching on Gainsborough to retake it for the King. Willoughby's foot soldiers fell back in disorder. With his own men and horses exhausted by the recent battle, Cromwell ordered a withdrawal. In a disciplined rearguard action, two parties of Horse, one from Cromwell's regiment and one from the Lincolners, stood firm and retired alternately in order to cover the main force. With the loss of only two men, they held back the Royalists until finally reaching the safety of Lincoln.

Meanwhile Newcastle was besieging Gainsborough, and fired on the town with cannon, setting fire to part of it. After a three day siege, Willoughby surrendered on 31 July. Newcastle then turned his forces around and headed north to besiege Hull, leaving a Royalist garrison at Gainsborough. With the town back in Royalist hands, raiding parties once more started to harass Parliamentary held areas.

Charles Cavendish, Royalist commander at the Battle of Gainsborough 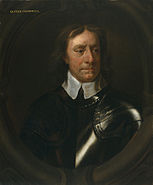 Oliver Cromwell, Parliamentarian commander at the Battle of Gainsborough

Battlefield Monument at the bottom of Foxby Hill, Gainsborough