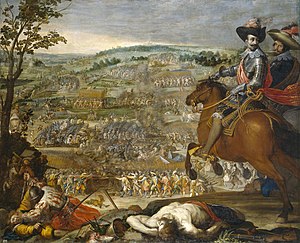 The Battle of Fleurus of August 29, 1622 was fought between a Spanish army, and the Protestant Powers of the Holy Roman Empire in the Thirty Years' War. The bloody struggle left the Protestants mangled and the Spanish masters of the field.

[[File:Herzog Christian von Braunschweig-Lüneburg.jpg|thumb|right|Christian the Younger of Brunswick, Duke of Brunswick-Lüneburg and Bishop of Halberstadt.]] After failing to relieve Heidelberg, besieged by Tilly's army, Frederick V, Elector Palatine, decided to disband his army. On July 13, 1622 the contract was cancelled and the unemployed army of Mansfeld and Christian of Brunswick was hired by the Dutch to help in the relief of the siege of Bergen-op-Zoom.
The Protestant army departed from Alsace and at a fast pace[1] crossed Northern France, entering the Spanish Low Countries through Hainaut.

The Spanish Army of Flanders, under command of Ambrosio Spinola, engaged in the siege of Bergen-op-Zoom, a town on the estuary of the Schelde River, was in a dangerous position; while a relieving Dutch army was being assembled to the East at Breda he faced an invasion from the South. He was in danger of being trapped between the two enemy armies, his line of retreat towards Antwerpen blocked by the invading German army. Gonzalo Fernández de Córdoba, commander of the Spanish army in the Palatinate, was recalled in a hurry to stop that army. Cordoba marched through Luxembourg and the difficult terrain of the Ardennes, and was able to intercept Mansfeld and Brunswick in the border of Brabant.[2]

The Protestant army advance guard met Spanish cavalry scouts on August 27 and the 29th they found Córdoba's army entrenched. Córdoba, much weaker in cavalry, had assumed a blocking position north of the town of Mellet, near Fleurus, with flanks supported by woods. The Protestant commanders deployed their army to try to break through the Spanish position.

The Spanish cavalry was composed of 53 small companies, assembled into ad hoc squadrons. There were 29 cuirassier companies and 24 arquebusier companies. All except 4 veteran cuirassier companies had been raised in 1621 and 1622.[3] They were composed by Walloon recruits and they had performed poorly at the Battle of Wimpfen, so Cordoba was obviously concerned about the flanks of his army.
The Spanish infantry was of mixed quality, the Tercio of Naples was an elite unit that traced back its history to 1567, it had lived up to its reputation at the Battle of Wimpfen with a superb performance, and Córdoba placed it in the post of honour to the right, blocking the road. Fugger Regiment and Verdugo Tercio were also experienced units, veterans of the Bohemian campaign, the rest of the units were garrison troops of lesser quality mobilized by Córdoba to fill his command.

The Protestant army had left Sedan with 25.000 men, but the swift march had reduced it to 14.000, many stragglers killed by angry Walloon peasants[2]
Protestant cavalry was highly motivated and of good quality, many of the recruits were members of the German lesser nobility, and most were heavily armoured cuirassiers. The infantry was of much lesser material, poorly equipped, it had suffered the most in the march.[4]

After a short cannonade, Mansfeld ordered a general advance. Some gaps opened up in the poorly drilled German infantry, and De Sylva attacked an exposed flank, routing one Battalion. However, Streiff counterattacked, the Walloon cavalry was wrong footed and suffered considerable damage from enemy pistol fire. De Sylva's cavalry took refuge behind the baggage wagons, while Streiff turned on the Spanish infantry, but without much success.

On the Protestant left, Brunswick had massed most of his cavalry, Córdoba's deployment made it impossible to outflank his position, but Brunswick hoped to overwhelm the Spanish by a massed frontal assault. The first charge was repulsed by Gauchier's cavalry, but Brunswick reordered his command and launched a second charge, the first line was repulsed again but the second line succeeded in pushing back the Walloon Horse.

Brunswick turned then against the Spanish infantry, but his own infantry failed to adequately support the attack, the Tercio of Naples held its ground, and murderous enfilade fire from musketeers ambushed in the nearby woods sent the Protestant cavalry reeling back in disorder.

In a desperate final charge, Brunswick was wounded, and his cavalry, demoralised, finally fell back. After five hours of fighting, Mansfeld ordered a general retreat, it was midday and he intended to take the road through Liege around Córdoba to reach Breda.[5]

The Spanish army was too tired to follow the enemy. However, next day, Córdoba sent Gauchier with the cavalry, he found the Protestant army strung along the road. The Protestant cavalry fled without putting up much of a fight, leaving the infantry to its fate. In march column, unable to deploy in a defensive formation, the infantry was cut to pieces. Gauchier also captured the artillery and the army baggage. The Protestant army had been all but destroyed.[2]

The Spanish victory was complete. Brunswick and Mansfeld's remnants, about 3.000 cavalry, joined finally the Dutch army at Breda after making a detour. Spinola was compelled to lift the siege of Bergen-op-Zoom, but as he was no longer in danger of being cut off, he did it at leisure, and he was able to secure his siege train and his entire baggage train.[6] Brunswick and Mansfeld only served for three months in Dutch pay, their unruly bands had no place in the disciplined Dutch army.[7] Meanwhile, Tilly's army easily overran the Palatinate.