This article is about the British combat uniform worn from 1939-1961. For the similarly named US Armed Forces standard issue combat uniform used from the 1980s until the first decade of the 21st century, see Battle Dress Uniform (BDU).
For army action clothing in general, see Battledress.

Battledress was the specific title of a military uniform adopted by the British Army in the late 1930s and worn until the 1960s. Several other nations also introduced variants of Battle Dress during the Second World War, including Australia, Canada, India, New Zealand, South Africa, and the United States of America (the E.T.O. uniform) and after the Second World War, including Argentina, Belgium, Norway, the Netherlands, and Greece.

Battledress (BD),[1] or later No. 5 Uniform,[2] was the combat uniform worn by British Commonwealth and Imperial forces and many Free European Forces through the Second World War. It was worn mostly but not exclusively in temperate climates. In some armies it continued in use into the 1970s. During the Second World War and thereafter this uniform was also used for formal parades (including mounting the Queen's Guard at Buckingham Palace) until the re-introduction of separate parade uniforms in the late 1950s.

From the early 1930s, the British War Office began research on a replacement for the Service Dress that had been a combined field and dress uniform since the early 1900s. Initially conducted on a small scale over several years, some of the ideas tested included deerstalker hats and safari jackets. After extensive field trials of other uniforms,[3] Battledress, Serge (often referred to as 1937 Pattern, albeit wrongly) was adopted just before the Second World War. The uniform was designed with the needs of mechanized infantry in mind, and was inspired by contemporary wool ‘ski suits’ that were less restrictive to the wearer, used less material, were warm even while wet and were more suited to vehicular movement than Service Dress.[4]

Attempting to create a more standardized uniform across much of the British military, it was composed of a fairly streamlined short jacket of wool serge that buttoned to the outside of high-waisted wool serge trousers. The jacket (or blouse) was copied by the U.S Army and was christened the Ike jacket. The sleeves of the British blouse had a forward curve built into them so that they were more comfortable to wear prone shouldering a rifle, or seated holding a steering wheel for instance, although they tended to show multiple wrinkles near the inside of the elbow when the soldier's arms were held straight at the sides. On the trousers, there was a large map pocket on the front near the left knee and a special pocket for a field dressing near the right front pocket (on the upper hip). The mixed green and brown fibres of the British battledress fabric matched the colours of heath and forests of the United Kingdom fairly well without having to be a single muddy olive green colour like American uniforms. One problem often developed, the gap between the blouse and trousers would open up in extreme movement and buttons popped, so braces were issued, in some cases a sweater was worn. A woolen shirt was typically worn under the wool blouse, wearing an open collar blouse (with tie) was initially restricted to officers, other ranks buttoning the top button of the blouse and closing the collar with a double hook-and-eye arrangement. Short canvas anklets (gaiters) or puttees typically covered the gap between the trousers and the ankle boots, further adding to the streamlined look and keeping dirt out of the boots without having to use a taller, more expensive leather boot.

Battledress was issued widely beginning in 1939 in the British Army (as well as the Canadian Army, who produced their own, almost identical, copy of Battledress after the outbreak of war), though shortages meant that some units of the British Expeditionary Force went to France in Service Dress.

1940 Pattern Battledress introduced as the name suggests in 1940 saw some small changes to the original design, a lined collar and slightly closer cut to the blouse and a new dressing pocket on the trousers with two pleats and an exposed shank button.

Utility Pattern Battledress (still labelled 1940 Pattern) was introduced in 1942; it deleted the fly front, and the front buttons, as well as the pocket buttons, were now exposed. Pocket pleats to the blouse were removed, as were box pleats to cuffs, early manufacture included two inside pockets but this was soon reduced to a single inside pocket. Plastic buttons were introduced, rather than the brass dished buttons of Battledress, Serge. The trousers retained the features of the 1940 pattern but the pocket button was now exposed and made of brown or green plastic like those of the blouse.

Officers were permitted to tailor the collar of their blouses so as to wear a collared shirt and tie.

Battle Dress, Olive Drab, War Aid was made in the U.S.A. for the British Army and was widely seen in the Mediterranean theatre. Note the American use of 'Battle Dress' as two words. The blouse featured exposed buttons on the outer pockets, which also bore no box pleats. The fly front of Battledress, Serge was retained. Cuff bottons were exposed, and there were two inside pockets. A small, internal hanger loop was introduced to the collar. The collar was closed by double hook-and-eye arrangement. Tailoring was of good quality and the wool blend tended to be finer than British-made blouses. Type-specific plastic buttons were inroduced.[5]

Canadian Battledress never had a 1940-type pattern introduced, though the collar closure did change from a set of hooks and eyes to a flap and button in about 1943. The Canadian version was also a much greener shade of khaki than the standard British version.[6] It was greenish with some brown, rather than brownish with some green. Buttons were green painted steel, with a central bar across the middle for the thread to hold in place.

New Zealand Battledress was almost identical to British Battledress, Serge but the wool tended to be much darker brown, while the stitching was a contrasting light colour. The NZ blouse had a six button fly front, rather than the British five.

Australian Battledress blouses were almost identical to British Battledress, Serge. The trousers were closer to British 1940 Pattern. Both tended to be a much greener colour than British BD. Australians didn't wear BD, but their own verson of Service Dress, meaning their BD was for export to other Commonwealth nations, such as the British. Buttons were in sheradised steel or plastic resin. 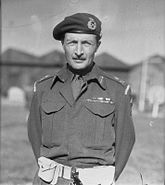 Battledress trousers known as "Trousers, Parachutist" were issued to men in parachute and glider units, though the majority still wore standard Battledress around the time of the Normandy landings. Supply increased as the war progressed but even by May 1945, standard Battledress trousers were still common in Airborne Divisions. 'Trousers, Parachutist' had two field dressing pockets in the rear, a voluminous map pocket lined with chamois leather, and an integral knife pocket on the right hand side. They were for 'combat' use only and as such, were not used for parades, or going on leave, etc.

A version of Battle Dress intended for working clothing was produced from denim with several manufacturer's variants. It was issued a size larger as it was intended to be worn over the regular uniform. Buttons were fixed through small holes in the denim material and kept in place by a split ring. Consequently, the buttons could be easily removed for laundering which, due to Denim Battledress being workwear, was more frequent than for serge battledress.

Battledress in shades of postman blue and navy blue were also produced for the Royal Air Force (and Commonwealth flying services) and Royal Navy/Royal Navy Volunteer Reserve (and Commonwealth naval services). The Civil Defence Corps were issued dark blue battledress with the same colour issued to post war prisoners in the United Kingdom.

German U-Boat crews were also commonly issued with British Army battledress (with German insignia added).[7] Large stockpiles had been captured by the Germans after the fall of France in 1940.

After the Second World War, individual Commonwealth nations developed their Battle Dress uniform into both a parade and a field uniform.

Battle Dress inspired the military combat uniforms of other nations such as the United States, which copied the Battle Dress Blouse directly with the M1944 "Ike" Jacket (also known as the E.T.O. (European Theatre of Operations) Jacket, though a similar pattern was produced in Australia for US personnel in the Far East), Germany (whose copy of Battle Dress was called the Felduniform 44) and France (Modèle 1945, 1946 and 1949 patterns).