The Bastille Day Military Parade (or 14 July Military Parade, translation of the French name of Défilé militaire du 14 Juillet) is a French military parade that has been held on the morning of 14 July each year in Paris since 1880, almost without exception.

The parade passes down the Champs-Elysées from l’Arc de Triomphe to Place de la Concorde where the President of the French Republic, his government and foreign ambassadors to France stand. This is a popular event in France, broadcast on French TV, and is the oldest regular military parade in the world. In some years, invited detachments of foreign troops take part in the parade and foreign statesmen attend as guests.

Smaller military parades are held in French garrison towns (like Toulon or Belfort) with local troops.

As the President of France arrives via a convoy of the Republican Guard to the Arc de Triomphe, he is greeted by the parade commander, who informs him that the parade is now ready for inspection. He then rides the Chief of Defense Staff's vehicle to inspect the troops on the Champs-Elysées escorted by troopers and officers of the Republican Guard's cavalry regiment and its mounted band, waving on the crowds lining up on the boulevard. After he disembarks from the vehicle he finishes the inspection through one done for the Republican Guard Infantry units, then walks to the stage on the Place de la Concorde to meet the dignitaries present.

Since recent years the parade starts with military bands from the French Armed Forces taking stage with band exhibitions and drill shows, even including displays from foreign service troops and mounted units, and military and civil choirs and even singers singing classic French patriotic songs. This opening act ends with the playing of La Marseillaise, the National Anthem of France.

The parade opens with cadets from the military schools in order of seniority: the École Polytechnique, the Saint-Cyr, the École Navale, followed by newer academies. The Patrouille de France leads the fly-past of the French Air Force and Naval Aviation.

Recently, it has become customary to invite units from France’s close allies to participate in the parade. For instance, in 2004, to mark the centenary of the Entente Cordiale, British troops (the band of the Royal Marines, the Household Cavalry Mounted Regiment, Grenadier Guards and King's Troop, Royal Horse Artillery) led the Bastille Day parade in Paris, with the Red Arrows flying overhead. While British troops had participated in the Bastille Day parades of 14 July 1919 and 1939 (see below), this was the first occasion that invited foreign troops had actually led the parade.[1] In 2007, the parade opened with detachments from all member states of the European Union, flying the European flag. The European anthem was played.

The parade follows with foot soldiers: army Infantry; troupes de Marine; Air; Gendarmerie, including the French Republican Guard; and occasionally non-military police and fire units. The French Foreign Legion always brings up the rear of this part of the parade, because their ceremonial marching pace is slower than that of other French infantry units and it's the only regiment that does not split up when passing by the officials and the army headquarters' tribune.

Motorised and armoured troops come next, and the parade traditionally ends with the much-cheered and popular Paris Fire Brigade (which is a military unit from the French Army).

At the same time, above the Champs-Elysées, the flypast continues with French Air Force and Naval Air Force planes and helicopters, and aircraft from the National Gendarmerie, the Interior Ministry's Civil Security Air Service and the various fire-fighting units nationwide.

Originally a popular feast, Bastille day became militarized during the Directory. Under Napoléon, the celebration lost much of its importance, though it came back into fashion during the Third Republic. The Fête de la Fédération became the official national celebration on the 28 June 1880, and a decree of 6 July the same year linked a military parade to it. Between 1880 and 1914 the celebrations were held at the hippodrome of Longchamps, Paris.

Since World War I the parade has been held on the Champs-Élysées, the first occasion being the défilé de la Victoire (“Victory parade”) led by Marshals Joseph Joffre, Ferdinand Foch and Philippe Pétain on 14 July 1919. This was not however a French National Holiday parade, although held upon the same date, but one agreed upon by the Allied delegations to the Versailles Peace Conference. A separate Victory parade of Allied troops was held in London four days later.[2]

On the occasion of the 14 July 1919 parade in Paris, detachments from all of France's World War I allies took part in the parade, together with colonial and North African units from France's overseas Empire.[3] The latter, most notably squadrons of Algerian Spahis mounted on Arab horses and in traditional full dress uniform, continued to participate in the annual parade until the end of the Algerian War in 1962.

In the Second World War, the German troops occupying Paris and Northern France paraded along the same route. A victory parade under General de Gaulle was held upon the restoration in 1945 of Paris to French rule while within the period of occupation by the Germans a company of the commando Kieffer of the Forces Navales Françaises Libres had continued the French National Holiday parade in the streets of London.

In 1971 female personnel were included for the first time amongst the troops parading.

Under Valéry Giscard d'Estaing the parade route was changed each year with troops marching down from the place de la Bastille to the place de la République to commemorate popular outbreaks of the French Revolution [2] :

Under Presidents, François Mitterrand and Jacques Chirac the parade route returned to the Champs-Elysées where it continues to be held.

In 1994, troop of the Eurocorps, including German soldiers, paraded on the invitation of François Mitterrand. The event was seen as symbolic of both European integration, and German-French reconciliation [3].

In 1999, for the “Year of Morocco” in France, the Morocco Royal Guard opened the parade, in the presence of King Hassan II of Morocco.

In 2002, the cadets of the United States Military Academy and surviving FDNY firefighters paraded.[4]

In 2004, British troops paraded to celebrate the centenary of the Entente cordiale. On an earlier occasion detachments of the British Brigade of Guards and Royal Marines had participated in the Bastille Day Parade of 14 July 1939, shortly before the outbreak of World War II.[5]

In 2005, “year of Brazil” in France, two Brazilian units opened the parade and the Smoke Squadron (a Brazilian air demonstration squadron) ended the fly-past in the presence of President Lula.

In 2007, president Nicolas Sarkozy invited all the 26 other EU member states to join the parade with a division of their armed services.[6]

The 2011 parade celebrated the French overseas possessions and the 200 years of the French firefighting service.

In 2011 former judge and Green politician Eva Joly called for an end to the 14 July parade practice, saying that it should be replaced with a "citizens' parade".[10]

The 2012 parade was led by the Armed Forces units in Afghanistan (the Foreign Legion included), several NATO countries' armed forces, and France's UN peacekeeping units. A parachutist who took part in the parade's finale parachute display was injured and taken care of at once by the medical personnel, in front of everyone in attendance.

2013's parade saw troops from Mali (including members of the French-led multinational intervention force) and Croatia, the newest EU member, march past. The Hector Berlioz arrangement of the national anthem was played on this parade by the band of the Troupes de Marine (forming the medal of the National Order of Merit on the grounds of the Place de la Concorde together with civilian participants forming the ribbon) and the French Army Chorus with soloist Florian Laconi, honoring the golden jubilee of the foundation of the National Order of Merit.

Composition of the parade

March past in slow and quick time

Infantry of the French Republican Guards

Cadets of the École polytechnique

Cadets of the Military Interarms School

Cadets of the School of the Air 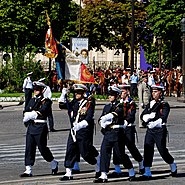 A Chasseur Alpin after the parade 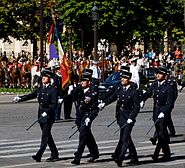 The red-crested musicians of the Republican Guard cavalry

The motorbikes of the French Republican Guard open the motorized parade

Armored bulldozer of the Génie

Fusiliers-marins from Toulon naval base parading in Toulon. 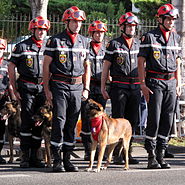 Cynotechnical unit of the Marseille Naval Fire Battalion during the military parade of 14 July 2012 in Marseille, with a decorated dog.

Bastille Day 2002 westpoint2.jpg
In 2002, the cadets of the United States Military Academy at West Point open the parade as guest troops

Band of the Brazilian Marines, guest participants in 2005

In 2007, one regiment from each European member-state paraded on the Champs-Élysées (here, the 30th regiment of the Romanian National Guard)

In 2008, a multinational United Nations battalion opened the parade