A bartizan or guerite is an overhanging, wall-mounted turret projecting from the walls of medieval fortifications from the early 14th century up to the 16th century. Most frequently found at corners, they protected a warder and enabled him to see his surroundings. Bartizans generally are furnished with oylets or arrow slits. The turret was usually supported by stepped masonry corbels and could be round or square.[1][2][3]

Bartizans were incorporated into many notable examples of Scots Baronial Style architecture in Scotland. In the architecture of Aberdeen, the new Town House built in 1868-74, incorporates bartizans in the West Tower.

Bartizan in the harbour of Valletta (Malta)

Garita at El Cañuelo in the Bay of San Juan, Puerto Rico. 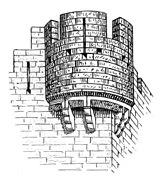 Bartizans on the West Tower of the new Town House in Aberdeen, Scotland, 1868–74

A British concrete position (Bartizan style), built at the North-Western corner of Sergei courtyard, Jerusalem. This is probably the sole existing testimony of the British "Bevingrad" constructed in 1946.