Badge of the Royal Air Force

The badge of the Royal Air Force is the heraldic emblem used to represent the RAF which features an Eagle superimposed on a circlet which is surmounted by a crown.

The badge was based on a design by a tailor at Gieves Ltd of Savile Row. It was first used in August 1918 and the original circlet showed a garter and buckle. The present plain circlet dates from 26 January 1923 when the badge was registered at the College of Arms and, it being noted that the garter and buckle were heraldically incorrect, a substitution was made.[1]

In heraldic terms it is: "In front of a circle inscribed with the motto Per Ardua Ad Astra and ensigned by the Imperial Crown an eagle volant and affronty Head lowered and to the sinister."[2] Although there have been debates among airmen over the years whether the bird was originally meant to be an albatross or an eagle, the consensus is that it was always an eagle.[3]

The badge is depicted on the iron gates at the ceremonial entrance to the Royal Air Force College Cranwell.

Other Commonwealth air forces have adopted badges which are based on the RAF badge. Several are shown below: 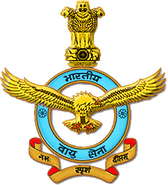