Military Wiki
Register
Don't have an account?
Sign In
Advertisement
in: Articles incorporating text from Wikipedia, Naval guns of the United Kingdom, 305 mm artillery,
and 3 more

The BL 12 inch naval gun Mark VIII[4] was one of the first large British naval guns designed for the higher pressures generated by the new cordite propellant, and Britain's first large wire-wound gun. It represented a major advance compared to previous British guns.

From 1921 to 1926 two guns from the decommissioned battleship HMS Illustrious were in service in the Tyne Turrets for coast defence, north and south of the mouth of the River Tyne in the northeast of England.

During bombardment service when mounted in the Lord Clive-class monitors deposition of copper from the projectile driving bands needed frequent removal. However, problems with the inner liners were more serious. The continual drag of the driving bands caused the liner to be gradually stretched forward. The resulting protrusion at the muzzle could simply be cut off, but in addition the liner began to form a ridge in the barrel near the shoulders of the outer ‘A’ tube, where the inner ‘A’ tube was keyed to the outer. The ridge accumulated copper from the driving bands, which could give sufficient retardation to the projectile to start the fuze, which resulted in a premature detonation either within the bore, or soon after leaving the muzzle. This happened several times during bombardment service, including an occasion when Lord Clive showered pieces of shell over the French destroyer Aventurier. The ‘steel choke’ restriction could be temporarily removed by rubbing down with an emery-covered block pullled back and forth in the bore, but the only permanent cure was to fit new guns with a modified design of liner, which had a different arrangement of internal shoulders.[5] 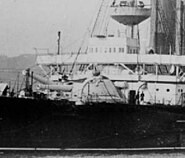 The starboard 12-inch (305 mm) Mark VIII gun in one of the turrets aboard the battleship HMS Illustrious. The gun's breech is open.

The starboard 12-inch (305 mm) Mark VIII gun in one of the turrets aboard the British battleship HMS Caesar. The gun's breech is closed.