Mk I was introduced from March 1916. It is identified by its short barrel and recuperator above the barrel.

The longer-barrelled Mk III soon followed, with a heavier breech to balance the gun. It retained the recuperator above the barrel.

Mk V, dating from July 1917, moved the recoil buffer and recuperator into a single housing below the barrel, which was common for all new British artillery developed during World War I. It also had a lighter breech with the gun balanced by the redesigned recoil system and altered gun positioning on the cradle.[3] Mk V also relocated the loading platform from the railway wagon to the revolving gun mounting, which now allowed 120° of traverse, and by overhanging the opposite side provided crew access when the gun fired to the side (90° traverse) and also helped to balance it.[3]

All 3 versions served on the Western Front in World War I, usually in 2-gun batteries, operated by the Royal Garrison Artillery.

Mk III and MK V were deployed for the home defence of Great Britain in World War II. 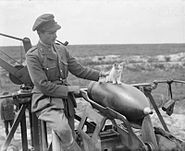