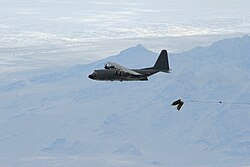 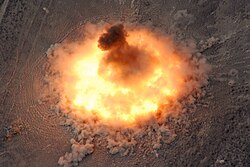 Detonation of the last BLU-82

The BLU-82B/C-130 weapon system, known under program "Commando Vault" and nicknamed "daisy cutter" in Vietnam and in Afghanistan for its ability to flatten a forest into a helicopter landing zone, is a 15,000 pound (6,800 kg) conventional bomb, delivered from either a C-130 or an MC-130 transport aircraft. There were 225 constructed.[1] The BLU-82 was retired in 2008 and replaced with the more powerful MOAB.

Originally designed to create an instant clearing in the jungles of Vietnam, the BLU-82B/C-130 was test-dropped there from a CH-54 Tarhe "Flying crane" helicopter. Later it was used in Afghanistan as an anti-personnel weapon and as an intimidation weapon because of its very large lethal radius (variously reported as 300 to 900 feet/100 to 300 meters) combined with a visible flash and audible sound at long distances. It is one of the largest conventional weapons ever to be used, outweighed only by a few earth quake bombs, thermobaric bombs, and demolition (bunker buster) bombs. Some of these include the Grand Slam and T12 earthquake bombs of late World War II, and more currently, the Russian Air Force FOAB and USAF GBU-43/B Massive Ordnance Air Blast bomb, and the Massive Ordnance Penetrator. The designation "BLU" stands for Bomb Live Unit, as opposed to "BDU" (Bomb Dummy Units) used for practice.

The Daisy Cutter has sometimes been incorrectly reported as a fuel-air explosive device (FAE). FAE devices consist of a flammable liquid and a dispersing mechanism, and take their oxidizers from the oxygen in the air. FAEs generally run between 500 and 2,000 pounds (225 and 900 kg). Making an FAE the size of a Daisy Cutter would be difficult because the correct uniform mixture of the flammable agent with the ambient air would be difficult to maintain if the agent were so widely dispersed. A conventional explosive is much more reliable in that regard, particularly if there is significant wind or thermal gradient.

The BLU-82 produces an overpressure of 1,000 pounds per square inch (psi) (7 MPa) near ground zero, tapering off as distance increases. It is detonated just above ground by a 38-inch (965 mm) fuze extender. This results in a maximum destruction at ground level without digging a crater.

This system depends upon the accurate positioning of the aircraft by either a fixed ground radar or on-board navigation equipment. The ground radar controller, or aircrew navigator if applicable, is responsible for positioning the aircraft prior to final countdown and release. Primary aircrew considerations include accurate ballistic and wind computations provided by the navigator, and precision instrument flying with strict adherence to controller instructions. Due to its extremely powerful blast effects, the minimum safe altitude for releasing this weapon is 6,000 feet (1,800 m) above ground level (AGL).

The BLU-82 was originally designed to clear helicopter landing zones and artillery emplacements in Vietnam. South Vietnamese VNAF aircraft dropped BLU-82 bombs on NVA positions in desperation to support ARVN troops in the Battle of Xuan Loc in the last days of the Vietnam War. During the Mayaguez incident, an MC-130 dropped a single BLU-82 to assist US Marine forces attempting to extract themselves from Koh Tang island.[3] Eleven BLU-82Bs were palletized and dropped in five night missions during the 1991 Gulf War, all from Special Operations MC-130 Combat Talons.[4] The initial drop tested the ability of the bomb to clear or breach mine fields;[5] however, no reliable assessments of mine clearing effectiveness are publicly available. Later, bombs were dropped as much for their psychological effect as for their anti-personnel effects.[6] The US Air Force dropped several BLU-82s during the campaign to destroy Taliban and al-Qaeda bases in Afghanistan to attack and demoralize personnel and to destroy underground and cave complexes.[4] American forces began using the bomb in November 2001[7] and again a month later during the Battle of Tora Bora.[8] On 15 July 2008, airmen from the Duke Field 711th Special Operations Squadron, 919th Special Operations Wing dropped the last operational BLU-82 at the Utah Test and Training Range.[9]