Military Wiki
Register
Don't have an account?
Sign In
Advertisement
in: Articles incorporating text from Wikipedia, Nuclear weapons of the United States

The B61 project started in 1960 with a study contract analyzing the potential of such a weapon. The official development program was funded in 1961, and the weapon was designated TX-61 (Test/Experimental) in 1963.

The original models of B61 used PBX 9404 HMX based plastic bonded explosive to implode the fissile material in the primary stage. Newer models use TATB based PBX 9502, which is an insensitive high explosive (IHE) and will not detonate due to fire, shock, or impact.

The overall B61 bomb was 13.3 inches (340 mm) diameter by 141 inches (3,600 mm) long, and weighed 695-715 pounds depending on version. This includes the outer aerodynamic shell, a crushable nose cone, parachute section in the tail, tail fins, etc. (Weight includes tail fins; diameter is of the bomb body itself, without fins).

The W73 missile warhead was designed for the AGM-53 Condor air to ground missile. Other than being described as a derivative of the B61, details of the W73 design are poorly documented.

Both the W73 and the Condor missile were cancelled and never entered service.

Two versions of the base W80 cruise missile warhead were designed and deployed. Both were the same basic size and shape and weight: 11.8 inches in diameter, 31.4 inches long, and weight of 290 pounds.

The BGM-109 Tomahawk TLAM-N cruise missile was equipped with a W80-0 warhead. The W80-0 used supergrade plutonium with less inherent radioactivity, due to missile storage in close proximity to submarine crew. It also has an outer shielding or case around the "front" end of the weapon, presumably some sort of radiation shielding. The W80-0 had a variable yield of 5 or 170-200 kilotons.

The W81 missile warhead was designed for use on the SM-2 missile. An enhanced radiation version was proposed, but the final version was fission-only. Detailed dimensions and weight are unknown. Yields are described as 2-4 kilotons.

The W81 was cancelled and never entered service.

The W84 was a LLNL design based on the B61, used in the Ground Launched Cruise Missile. It was slightly larger (13 inches diameter, 34 inches long) and heavier (388 pounds) than the otherwise similar W80 warheads, possibly to make it safer for ground handling in the field.

Between 300 and 350 W84 warheads were produced. They remain in US inactive inventory.

120 W85 warheads were produced. They were recycled into B61 Mod 10 bombs after the Pershing II was scrapped.

No units were ever produced. 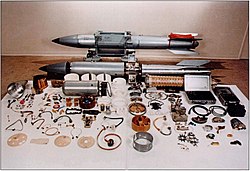 B61 nuclear bomb, assembled and disassembled. 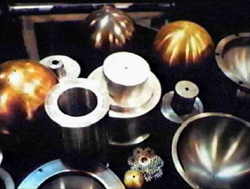 Internal nuclear components of the B61 bomb. 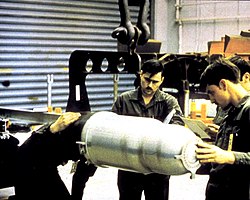 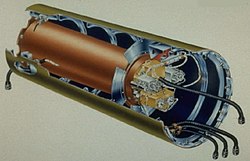 A DOE drawing of the W85 Pershing-II IRBM warhead.