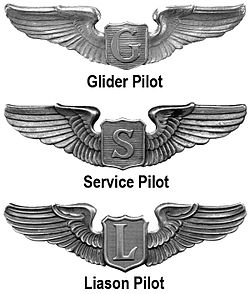 The Glider, Service, and Liaison Pilot Badges were qualification badges of the United States Army Air Forces which were issued during the years of World War II. The badges appeared as the standard USAAF Pilot Badge with one of three letters centered on the badges’ shield, or escutcheon. The letter on the badge indicated the qualification type.

Glider Pilot wings were issued to soldiers who completed training as pilots of military gliders (MOS 1026). The wings were issued initially during the Second World War. Glider Pilots often said that the "G" on the shield stood for "Guts". These wings should not be confused with the Glider Infantry Badge which was created in 1944 to recognize glider infantrymen of U.S. Airborne Divisions.[1]

The success of German glider-borne forces early in World War II catapulted the Air Corps into a glider program in February 1941. Glider pilots were unique in that they had no parachutes, no motors and no second chances. In December 1941, plans called for training 1,000 AAF glider pilots, but eventually about 5,500 received their wings. Most glider pilots came from enlisted ranks—all were volunteers. Upon graduation, enlisted men would be promoted to staff sergeant (or would retain present grade if higher) while officers would train in grade. But after Nov. 21, 1942, all enlisted graduates were appointed as Flight Officers equal to the then existing rank of Warrant Officer Junior Grade (WO 1) upon completing advanced glider training.

The Glider Pilot badge is currently awarded to cadet instructor pilots at the USAF Academy glider flight training program, by permission of the Academy Superintendent and the National WW2 Glider Pilots' Association.

The Service Pilot Badge was awarded to soldiers in MOS 773: "Pilots airplanes on noncombat flights such as observation flights, tow target flights, and in ferrying aircraft. (Type of airplane flown depends on rating.)"[2]

The Liaison Pilot Badge was presented to enlisted military pilots of MOS 772: "Pilots and maintains a small liaison airplane of 175 horsepower or less for purposes of ferrying officers, taking observers on observation missions, or transporting small amounts of critical materiel. Inspects and performs minor maintenance on airplane to which assigned.",[3] and usually assigned as to liaison units of the USAAF. These units flew "...light single-engine liaison aircraft. Included were many enlisted aviation students who washed out of pilot training after having soloed and were given the opportunity to become liaison pilots. Flight training consisted of about 60 hours of flying time and stressed such procedures as short field landings and takeoffs over obstacles, low altitude navigation, first aid, day and night reconnaissance, aerial photography and aircraft maintenance.

Unarmored and unarmed—except perhaps for a .45 pistol or .30 carbine—these men in 28 different squadrons flew low and slow with wheels, skis or floats. They flew varied and often hazardous missions in nearly every theater—medical evacuation from forward areas; delivering munitions, blood plasma, mail and other supplies to front lines; ferrying personnel; flying photographic or intelligence missions; serving as air observers for fighters or bombers; and other critical yet often unpublicized missions.

During the campaign to recapture the Philippines, pilots of the 25th Liaison Squadron flew a dozen L-5 aircraft in short 30-minute flights (Dec. 10-25, 1944) delivering supplies (including a 300-bed hospital) to the 6,000 men of the 11th Airborne Division isolated in the mountains of Leyte.

In another mission, an army officer wounded in the chest in New Guinea was evacuated in a liaison aircraft as the pilot pumped a portable respirator with one hand while he flew the aircraft with the other. In the northwestern United States, some liaison pilots flew forest patrols (Project Firefly), watching for fires ignited by incendiary bombs carried across the Pacific beneath unmanned Japanese high-altitude balloons."