The Austin K2/Y was a British heavy military ambulance built by the Austin Motor Company for use during World War II.

The rear body, built by Mann Egerton, could take ten casualties sitting or four stretcher cases. One veteran stated he carried 27 wounded at one point in the North African Campaign; this involved seating passengers on the wings, bonnet, and rear steps and even using rifles to suspend extra stretchers across the walkway in the back; he was mentioned in dispatches for this feat.[citation needed]

13 102 Austin K2/Y ambulances were built at Austin's Longbridge plant and an estimated 50 or more remain today.[citation needed] The Austin chassis was one of three main designs fitted with Mann Egerton bodies, the others being Morris Commercial and Bedford Vehicles. It is estimated there are two remaining Morris Commercials, but no Bedford examples are said to survive.[citation needed]

The Austin K2 was generally regarded as having a widely spaced four-speed gearbox that needed to be "understood", but once mastered provided good service. One person who did master it was the then Princess Elizabeth, who drove one during the war.[1] It had two petrol tanks, one on each side (total capacity: approx. 2 × 12 Imperial gallons (2 × 54.5 l)). The top speed is around 50 mph (80 km/h).

The design was popular with British, Common­wealth and also American troops, being an example of reverse Lend-Lease. The K2 (KTwo) was often affectionately nicknamed "Katy".

This type of ambulance was the "star" of the film Ice Cold in Alex (1958) featuring John Mills, Sylvia Syms, Anthony Quayle and Harry Andrews.

Three Austin K2/Y ambulances participated in the VE-VJ days 50th anniversary parade down the Mall in London on 19 August 1995.[1] 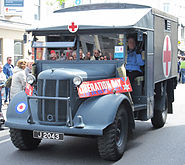 Austin K2/Y Ambulance with bell at Liberation Day, 9 May 2010, Jersey.

Sideview of an Austin K2/Y Ambulance at the War and Peace show 2010.

Rear of an Austin K2/Y Ambulance. Note the bulge for the spare wheel.

Cab of an Austin K2/Y Ambulance. 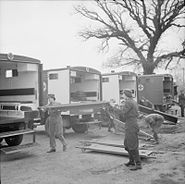 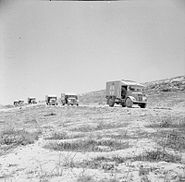 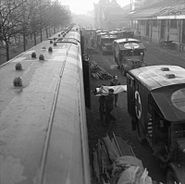 Wounded soldiers being loaded from a number of Austin K2/Y Ambulances into a hospital train in Belgium, March 1945. (Note the stripes on the spare wheel bulge.)