The Atlas Cheetah is a South African fighter aircraft, developed for the South African Air Force (SAAF) and currently operated by the Ecuadorian Air Force (FAE). It was first built as a major upgrade of the Dassault Mirage III by the Atlas Aircraft Corporation (later Denel Aviation) of South Africa (established 1965) in South Africa and is based on the Israeli Kfir fighter.[1] Three different variants were created, 16 dual-seat Cheetah D, 16 single-seat Cheetah E and 38 single-seat Cheetah C. The Cheetah Es were retired in 1992, and the Cheetah Cs and Cheetah Ds in April 2008, being replaced by the Saab Gripen. A limited number are still operated in South Africa as flight test aircraft.

The Atlas Cheetah programme grew out of South Africa's requirement for a modern fighter and strike aircraft in the 1980s. There was a need for more advanced aircraft to attain an edge over the ever more sophisticated Soviet aircraft such as the MiG-23 being supplied to Angolan and Cuban forces in action against South African forces in the Border War. Furthermore, the increasing cost of maintenance due to sanctions and the age of the aircraft used by the SAAF had to be addressed. The arms embargo imposed at the time by United Nations Security Council Resolution 418 prevented South Africa from purchasing new aircraft from other countries, thus making an upgrade of existing aircraft the only option. By this stage, the South African aviation industry had reached the level of technical capability to make a large and sophisticated upgrade possible, leading the SAAF to make the only possible decision: to extensively upgrade one of the existing types in service while an advanced indigenous fighter, the Carver, was under development.

At the time the SAAF's fast jet fleet consisted of Dassault Mirage III (EZ/CZ/BZ/DZ/D2Z/RZ/R2Z) and Mirage F1 (AZ/CZ) aircraft. Though the Mirage F1s were the most modern of the fleet, having been delivered from 1977 onwards, they were the primary element of South Africa's air defence and strike fleet and to withdraw them for an upgrade would have left an unacceptable gap in its air defence and strike capability. In addition there were already a few successful Mirage III upgrades from which to learn, such as the Kfir and Mirage III NG, so the SAAF's Mirage III fleet was chosen as the basis for the upgrade, to be known initially as Project Cushion.

The work was carried out by Atlas Aviation (formerly Atlas Aircraft Corporation and lately Denel Aviation), using expertise partly gained by recruiting technicians from Israel's aborted Lavi jet fighter project.[2] The upgrade consisted of a complete refurbishment of the airframe down to zero hours (in which some 50% of the original airframe was said by Atlas to have been replaced), the fitting of non-moving canards (Cheetah D & E having slightly smaller (70%) canards than that of the Cheetah C and Kfir) just aft of the engine intakes, two new stores pylons at the wing roots, an aerial refuelling probe, new ejection seats, a more powerful engine (the SNECMA Atar 9K50C-11 [upgraded in South Africa]) in the D and C variants, a new main wing spar along with a new "drooping" leading edge and a dog-tooth incision on each wing, modern elevons controlled by a twin computer flight control system, and strakes on the nose to improve the Cheetah's high-Angle of attack (AoA) performance. The aerodynamic refinements alone increased the turn rate by 15%, increased the AoA, reduced the minimum airspeed to 100 kt and increased maximum take-off weight by 700 kg.[citation needed] However, it also resulted in a 5% decrease in maximum level speed and acceleration.

In addition, a highly sophisticated avionics, radar, EW and self-protection suite was installed, necessitating a lengthening of the nose. This entailed the fitting of an EW suite which included missile and radar warning sensors. Other features included the aircraft's self-protection system, which consisted of electronic jammers and chaff/flare dispensers that engaged automatically; the integration of a South African helmet-mounted sight and an oversized head-up display (HUD); the installation of an advanced Pulse-Doppler radar and sophisticated cockpit instrumentation.

Most leading aviation publications[3] believe that Israel Aircraft Industries was involved in at least the initial stages of the upgrade, and that some of the upgrades components were sourced from Israel, though the SAAF refuses to either confirm or deny such speculation.[citation needed] However, considering the close ties in defence industry research between South Africa and Israel at the time, such co-operation on the Cheetah program seems likely. Sixteen of the SAAF's 27 Mirage IIIDZ/D2Z aircraft were converted to Cheetah D standard, 16 of its Mirage IIIEZ aircraft were converted to Cheetah E standard, but no South African Mirage airframes were used for the 38 Cheetah Cs.[citation needed]

First to roll off the production line were the Cheetah Ds and Cheetah Es, though it appears the Cheetah Ds had production priority. The first aircraft to be converted was a Mirage IIID2Z, no.845, which arrived at Atlas in April 1983. The date of completion is unknown, but the first Cheetah D was officially unveiled on 16 July 1986, by which time a number of Cheetah Ds had already entered service with 89 Combat Flying School at AFB Pietersburg, though the type was only declared operational in 1987. The second and third aircraft to be delivered to Atlas were both Mirage IIIEZs, and the resulting Cheetah Es went into service with 5 Squadron at AFB Louis Trichardt. 16 of each type were in service by 1991 when the Cheetah D and E conversion lines closed, by which time the first of the 38 Cheetah Cs were being converted, with the first being rolled out in January 1993. All the Cheetah Cs entered service with 2 Squadron, also at AFB Louis Trichardt. None of the Cheetah variants ever saw combat in the Border War, so their performance was never tested against the dominant fighter in the conflict, the MiG-23. The Cheetah Es were used as permanent interceptor aircraft, with a minimum of two aircraft on round-the-clock alert status, until the end of the Border War in 1989.

With the entering into service of the Cheetah C, the Cheetah Es were withdrawn from service and 5 Squadron was disbanded in 1992. Soon afterwards, 89 Combat Flying School was also disbanded, and all the Cheetah Ds were transferred to 2 Squadron, where they remained until retirement in 2008.

Two Cheetah D's are still operated in South Africa by the SAAF on behalf of Denel Aviation at the Overberg Test Flight and Development Centre as systems test aircraft.

The Cheetah C was the ultimate development of the Cheetah series, and was the only fighter aircraft in service with the SAAF until replaced by the Saab JAS 39 Gripen in 2008. Many of the features of the Cheetah aircraft are still classified, and the SAAF is unwilling to reveal too many details. What is known is that in addition to the upgrades described above, the Cheetah C incorporates a more sophisticated avionics and navigation suite and a new pulse-doppler multi-mode radar (ELTA),and one of the most advanced EW systems fitted to a fighter aircraft. The aircraft is also fitted with a data link, though the capabilities of this system are unknown, and it received updated versions of the helmet-mounted sight, HUD and improved HOTAS controls.

Other improvements include the fitting of a single-piece wrap-around windshield with an anti-radiation coating in place of the old three-piece version, a new in-flight refuelling probe with less external piping, new undercarriage and suspension, the deletion of the wing fences, an upgraded version of the Atar 9K50 and a new nose to incorporate the more sophisticated electronics and radar.

Like the Cheetah D, the Cheetah C is capable of delivering precision-guided munitions (PGMs), ranging from laser-guided bombs (LGBs), to GPS-guided weapons and TV-guided bombs. It also has the capability of using stand-off air-to-ground weapons such as the MUPSOW and TORGOS. In addition, it is able to carry a raft of air-to-air weapons, and the SAAF currently equips its aircraft with the V4 R-Darter, a beyond-visual-range (BVR) radar-guided missile, and the U-Darter, a highly capable short-range infrared (IR)-guided missile.

A measure of the capabilities of the Cheetah C is the result of an air-combat maneuvering (ACM) exercise between the Cheetah Cs of 2 Squadron and F-15E Strike Eagles of the 494th Fighter Squadron, United States Air Force at RAF Lakenheath, after which the score tallies for each side were almost exactly equal.

The Cheetah D is the sole two-seater variant, and is mainly used operationally as a training aircraft for pilots converting to the Cheetah C, though it does have a secondary attack capability, including the ability to deliver PGMs. Under Project Recipient, 10 of the remaining 13 Cheetah Ds were re-engined with the Atar 09K50C-11, replacing their original Atar 09C engines. The three not upgraded have been withdrawn from use. Recently, the Cheetah D's avionics were also upgraded, to bring them on par with the avionics in the Cheetah C, while the original three piece front windshield has been replaced with a one-piece wraparound version.

Cheetah D No.845 was based at the Test Flight and Development Centre (TFDC) as a systems testing aircraft. It was recently used in the development of the Denel Dynamics MUPSOW stand-off weapon. Denel also keeps two Cheetah Ds for testing, No.844 and No.847. The former is Denel's standard systems testing aircraft, while the latter was used in the evaluation of the SMR-95 engine, a development of the Klimov RD-33. The performance increase offered by the Russian engine was impressive, but budget cuts and problems with the aircraft's centre of gravity ended the program. No.847 is currently in storage with Denel.

These aircraft were retired from service in 2008, as the first JAS-39D Gripen began to be delivered to the SAAF.

The single-seater Cheetah E is regarded by most observers as having just been an interim fighter for use in the period before the Cheetah Cs became operational, due to the very short operational life of the Cheetah E, which was only a few years from its entry into operational service in 1987/88 to its retirement in 1992. It was fitted with a comparatively simple avionics suite and radar, and retained the Atar 9C-3 engine. Its typical mission while in service was as a standby interceptor, whereby a minimum of two aircraft, armed with two V3B (later V3C) missiles, would be on permanent alert status in case of an attack from the north.

All the aircraft were placed into storage, though the final example, No.842, was painted in a non-standard camouflage scheme and used for systems testing. No.842 is currently with the SAAF Museum, and is stored at AFB Swartkop. In 2003 Chile purchased five of the mothballed aircraft, numbers 819, 820, 827, 832 and 833. The country had also indicated its desire to purchase seven more aircraft (numbers 822, 823, 825, 828, 829, 831 and 834), subject to the agreement of a suitable purchase price. The Chilean Air Force (FACh) used the Cheetah E airframes as a source of spares for its similar ENAER Pantera aircraft[4] until these planes were retired in late 2006.

The Cheetah R was a feasibility study into an extension of the Cheetah upgrade programme to include a specialist reconnaissance model. An Atar 9K50-engine Mirage IIIR2Z, No.855, was chosen as the basis for the upgrade. In addition to the airframe refurbishment, No.855 received a new nose design and the same radar as used in the Cheetah E, the twin DEFA 30mm cannons were removed and it was the only Cheetah type to not receive an in-flight refuelling probe. The SAAF decided not to proceed with the Cheetah R programme, and so No.855 was fitted with the Atlas Advanced Combat Wing (ACW), for which it was used as a testing and development aircraft. No.855 was eventually scrapped, and its ACW put in storage at the SAAF Museum. 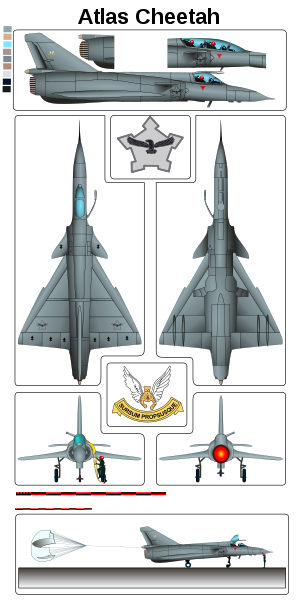