The Astronaut Badge is a badge of the United States, awarded to military and civilian pilots who have completed training and performed a successful spaceflight. A variation of the astronaut badge is also issued to civilians who are employed with the National Aeronautics and Space Administration as specialists on spaceflight missions.

To earn an astronaut badge, a military officer must complete all required training and participate in a space flight more than 100 kilometers (62 miles) above the Earth. This boundary, known as the Kármán line, comes from the Fédération Aéronautique Internationale. However, in the 1960s, the United States Department of Defense awarded astronaut badges to military and civilian pilots who flew aircraft higher than 50 miles (80 kilometers).[2] Seven USAF and NASA pilots qualified for the astronaut badge by flying the sub-orbital X-15 rocket spaceplane.[2]

American test pilots Michael Melvill and Brian Binnie were each awarded a Commercial Astronaut Badge by the Federal Aviation Administration (FAA) when they flew sub-orbital missions aboard the Scaled Composites SpaceShipOne rocket spaceplane.[2] All other men and women awarded the astronaut badge earned it travelling to space in non-winged rockets, the X-15, or the space shuttle. 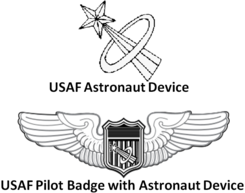 The gold Astronaut Device is issued by the U.S. Army to Army aviators, flight surgeons, and aircrew members that qualify as astronauts. The Astronaut Device is a gold shooting star and elliptical orbit which is affixed over the shield of previously awarded Army aviation badges. Army Astronauts that have yet to fly a mission and have not previously been awarded any aviation badge are awarded the Army Aviation Badge. Once they have flown a mission, they are awarded the Astronaut Device which is affixed to the shield of their Army Aviation Badge. The shooting star and orbit representation is meant to imply the astronaut's theater of operations, space. The Army Astronaut Device was approved on May 17, 1983. The black version of the device and its sew-on equivalent may be worn on the Army Combat Uniform (ACU); the silver wings with gold device version is authorized for wear on Army Service Uniforms. It is believed to be the rarest badge issued by the U.S. Army.[3][4][5][6]

The U.S. Air Force Astronaut Badge consists of a standard USAF aeronautical badge upon which is centered the Astronaut Device. The Air Force does not consider Astronaut to be a separate rating from its six established rating badges, but as a "qualifier" to them, and may only be awarded by the Air Force Chief of Staff after written application upon completion of an operational space mission. The rating of Observer is used for USAF Mission Specialists who have completed training but not a mission and are not otherwise aeronautically rated as a USAF pilot or USAF navigator.

NASA also has an Astronaut Badge, which is issued to civilian personnel who participate in U.S. space missions.[citation needed]

The U.S. Federal Aviation Administration has granted commercial astronaut wings to civilian pilots who have performed a successful spaceflight. Currently, only Mike Melvill and Brian Binnie have these wings.[8][9]

In addition to the Astronaut Badge, which is worn on a military uniform, an Astronaut Pin is also issued to all NASA astronauts. It is a lapel pin, worn on civilian clothing. The pin is issued in two grades, silver and gold, with the silver pin awarded to candidates who have successfully completed astronaut training and the gold pin to astronauts who have actually flown in space. Astronaut candidates are given silver pins but are required to purchase the gold pin at a cost of approximately $400.[10]

Apollo 12 astronaut Alan Bean took his silver pin to the Moon in November 1969 and left it on the lunar surface. He said later that since he had worn the silver pin for six years and that he would be wearing a gold pin after the mission, he would not be needing his silver one any more, so "what better place to leave it than on the moon?".[citation needed]

A unique astronaut pin was made for NASA astronaut Deke Slayton in 1967. It was gold in color, like the ones given to astronauts who had flown, and it had a small diamond embedded in the star. It was made at the request of the crew of the first manned mission of the Apollo program as a tribute to Slayton's work at NASA. The idea was that everyone in the Astronaut Office had thought that Slayton would never get to fly in space (due to his heart murmur; he would later fly on board the Apollo-Soyuz Test Project as Docking Module Pilot), but as they knew that it was primarily because of him that they managed to do so, he should wear a gold pin rather than a silver one as a token of appreciation. As they knew that Slayton would refuse to wear exactly the same gold pin as veteran astronauts, the diamond was added. The pin was supposed to have been flown on board the Apollo 1 spacecraft, then given to Slayton after the mission was over. However, the Apollo 1 crew died in a fire during a training exercise in January 1967. The pin was given to Slayton by the widows of the dead crew as a token of condolence. This diamond-studded gold pin was later flown to the moon on Apollo 11 in July 1969.[11]