The Antonov An-2 (Russian nickname: "Annushka" or "Annie"; "kukuruznik" - corn crop duster; USAF/DoD reporting name Type 22,[5] NATO reporting name Colt.[6]) is a Soviet mass-produced single-engine biplane utility/agricultural aircraft designed and manufactured by the Antonov Design Bureau beginning in 1946.[4] Its remarkable durability, high lifting power, and ability to take off and land from poor runways have given it a long service life. The An-2 was produced up to 2001 and remains in service with military and civilian operators around the world.

The An-2 is used as a light utility transport, parachute drop aircraft, agricultural work and many other tasks suited to this large slow-flying biplane. Its slow flight and good short field performance make it suited for short, unimproved fields, and some specialized variants have also been built for cold weather and other extreme environments. The Guinness Book of World Records states that the 45-year production run for the An-2 was for a time the longest ever for any aircraft — and challenging the well over two decades-long run of the much lighter, late-1920s origin Polikarpov Po-2 biplane it was intended to replace — but the An-2's production duration run record was itself recently exceeded by the four-turboprop-engined, 1954-origin Lockheed C-130 Hercules military transport.[4]

The Antonov An-2 was designed to meet a 1947 Soviet Ministry of Forestry requirement for a replacement for the much lighter, largely wooden-airframed Po-2, which was used in large numbers in both agricultural and utility roles. Antonov designed a large single bay biplane of all-metal construction, with an enclosed cockpit and a cabin with room for seats accommodating twelve passengers. The first prototype, designated SKh-1 and powered by a Shvetsov ASh-21 radial engine, flew on 31 August 1947. The second prototype was fitted with a more powerful Shvetsov ASh-62 engine, which allowed the aircraft's payload to be significantly increased from 1,300 to 2,140 kg (2,870 to 4,720 lb), and in this form it was ordered into production.[7]

Initial Soviet production was at State Factory 473 in Kiev, Ukrainian SSR where the bulk of up to 5,000 units had been produced by 1960. Later Soviet production (after 1965, of model An-2M especially) was at State Factory 464 at Dolgoprudniy, Russian SFSR. After 1960, however, most An-2s were built at Poland's WSK factory in Mielec, with over 13,000 made there before full production ended in 1991. Limited production from parts stocks, as well as spares and maintenance coverage continued until 2001, when four aircraft were produced for Vietnam.[8] China also builds the An-2 under licence as the Shijiazhuang Y-5.[4] It has been occasionally and erroneously reported that there was East German production of the An-2. While An-2s were extensively refurbished in East Germany, there were no new aircraft built there.

The An-2 was designed as a utility aircraft for use in forestry and agriculture. However, the basic airframe is highly adaptable and numerous variants have been developed. These include hopper-equipped versions for crop-dusting, scientific versions for atmospheric sampling, water-bombers for fighting forest-fires, flying ambulances, float-equipped seaplane versions and lightly armed combat versions for dropping paratroops.[9] The most common version is the An-2T 12-seater passenger aircraft. All versions (other than the An-3) are powered by a 750 kW (1,010 hp) nine-cylinder Shvetsov ASh-62 radial engine, which was developed from the Wright R-1820.[4] It uses 43 gallons of avgas per hour.[9][Clarification needed]

The An-2 has design features which make it suitable for operation in remote areas with unsurfaced airstrips:

A note from the pilot's handbook reads: "If the engine quits in instrument conditions or at night, the pilot should pull the control column full aft and keep the wings level. The leading-edge slats will snap out at about 64 km/h (40 mph) and when the airplane slows to a forward speed of about 40 km/h (25 mph), the airplane will sink at about a parachute descent rate until the aircraft hits the ground." [4]

The An-2 indeed has no stall speed quoted in the operating handbook. Pilots of the An-2 say one can fly the aircraft in full control at 48 km/h (30 mph) (as a contrast, a modern Cessna four-seater light aircraft has a stall speed of around 80 km/h (50 mph)). This slow stall speed makes it possible for the aircraft to fly backwards (if the aircraft is pointed into a headwind of, say, 56 km/h (35 mph), it will travel backwards at 8.0 km/h (5 mph) whilst under full control).[4]

Since the collapse of the Soviet Union and the Eastern European communist states, most airlines in these areas have been withdrawing their An-2s from service, as some of these aircraft are now over 40 years old and the production of avgas had decreased.[9] Private operators are still using the planes, as their stability, capacity and slow-flying ability make them very popular, for instance for skydiving.[4][9]

In the early 1980s Antonov experimented with a development of the An-2 powered by a modern turboprop engine. The unit used was a 1,080 kilowatts (1,450 hp) Glushenkov engine and aircraft fitted with this engine were fitted with a longer, more streamlined nose to accommodate it. See Antonov An-3 article for more information.[4]

In 2013 Antonov announced that it had successfully flown for the first time a new version of the An-2 dubbed the An-2-100 fitted with a 3-blade reversible propeller and a 1500 shp Motor Sich MS-14 turboprop running on kerosene rather than Avgas which is no longer produced in CIS countries.[10]

Whilst their high noise levels, increasing maintenance costs, high fuel consumption[9] and unsophisticated nature (the pre-flight checks alone take between 30 and 40 minutes) make them obsolete for commercial service in Europe, the large number of aircraft available means that prices are low (from as little as US$30,000 for a serviceable example). This makes them ideal for the developing world, where their ability to carry large loads into short airstrips makes them assets to airlines on a budget. Many ex-Aeroflot An-2s work as regional airliners in Africa, Central and South America, Cuba and southeast Asia.[4]

North Korea has a number of the aircraft. In a war they could possibly be used to parachute or deliver special forces troops behind enemy lines for sabotage operations.[4]

The An-2's ability, looks and flying characteristics, and its status as one of the world's biggest single-engined production biplanes, mean that demand for the An-2 is increasing in Western Europe and the United States, where they are prized by collectors of classic aircraft, making it an increasingly common sight at airshows. Many western countries prohibit the use of the An-2 commercially because the aircraft has not been certified by the relevant national aviation authorities. These restrictions vary by country, but all prevent the An-2 being used for any 'for profit' purpose, with the exception of the United States, where An-2s imported since 1993 are limited to experimental certification,[9] but PZL-built An-2s are exempt from this restriction due to a bilateral agreement with Poland.[4]

In 2013, Antonov received orders for upgrading "hundreds" of the An-2 planes still in operation in Azerbaijan, Cuba and Russia to the An-2-100 upgrade version.[3]

The Siberian Research Institute of Aviation (SIBNIA) has test flown a highly modified Antonov An-2 with carbonfibre winglet-like braces and carbonfibre wing structures. This is to demonstrate the aerodynamic and structural changes planned for an An-2 replacement, Sukhoi has announced on 10 June 2015. The aircraft was equipped with a five-bladed turboprop engine, most probably the Honeywell TPE331 already installed on a modernized version of the An-2 that entered service in 2014. The autoclave-cured carbonfibre composite materials – including wing panels, spars and ribs – were produced by the Novosibirsk Aviation Plant. Sukhoi says the design change improved the speed of the An-2 by 50%, and testing also has shown the minimum flying speed of the aircraft is “close to zero”.[11]

The An-2 was used by combat services in the Korean War. During the 1960s an An-2 attempting to engage South Vietnamese naval units was shot down by an F-4 Phantom II under the control of an Air Intercept Controller on the USS Long Beach.[4]

On 12 January 1968, a clandestine TACAN site (call sign: Lima Site 85/Phou Pha Ti) installed by the United States Air Force in Northern Laos for directing USAF warplanes flying from Thailand to Vietnam was attacked by three North Vietnamese An-2s. Two An-2s fired on the outpost using machine guns and rockets while a third An-2 orbited overhead to survey the assault. An Air America Bell UH-1B, XW-PHF, resupplying the site chased the two attacking aircraft. By using an AK-47 the American crew (Ted Moore Captain, Glen Wood kicker) succeeded in shooting down one of the An-2s while the second aircraft was forced down by combined ground and air fire and crashed into a mountain. The surviving Antonov returned to its home base, Gia Lam, near Hanoi.[12]

During the Croatian War of Independence in 1991, a few old Antonov An-2 biplanes used for crop-spraying were converted by the Croatian Air Force to drop makeshift boiler bombs and were used in supply missions to the town of Vukovar and other besieged parts of Croatia.[13] The chief advantage for the An-2 was that they could take off and land in small or improvised airstrips. They were also used to drop supplies by parachute on isolated garrisons. At least one was shot down on 2 December 1991 over Vinkovci, eastern Slavonia, by Serbian SAM missiles, purportedly SA-6s.[14][15] Following the shootdown, the flights over Serbian lines ceased, due to the presence of TV guided SA-6. The previous radar guided AA systems were avoided by keeping the airplane's speed below 140 km/h, the speed of objects that radars were programmed to erase from the screen.

During the Soviet Union era the An-2 was used as a short-range air-liner for regular flights between the towns of Kuressaare and Kärdla, which reside on separate islands, Saaremaa and Hiiumaa.[citation needed]

In addition to Aeroflot, the Soviet Air Force and other Eastern Bloc military forces including Vietnam People's Air Force (VPAF), dozens of nations and airlines have employed the An-2 in civil and military roles. In recent years, it has also gained popularity in the U.S. and Canada as a bushplane.

The Korean People's Army Special Operation Force is known to use the An-2 to facilitate the infiltration of paratroopers.[27]

As of 2015, there were thousands of An-2 still in operation around the world, including over 1,500 in Russia, 294 in Kazakhstan and 54 in Ukraine.[3] Because of their reliability and robustness, several An-2 are also used in scheduled passenger service between airstrips in Western countries with one example being the service between the North-Sea islands of Sylt and Föhr. 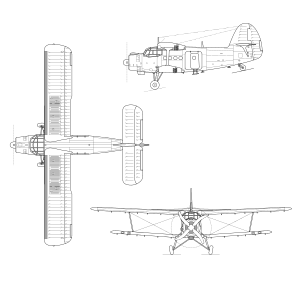 As of 2 September 2017 there have been 619 hull-loss accidents of An-2, claiming a total of 770 lives.[28][29] One of the most recent accidents occurred around 15:00 on 2 July 2017 in the Black Sea, when an Antonov An-2R operated by Albatros crashed in the Kiliya District, Ukraine during an aerial application flight; both pilots survived.