András Hadik, son of a lesser noble family, was born on October 16, 1710 in Csallóköz (then Kingdom of Hungary, now Žitný ostrov in Slovakia) or in Kőszeg, Kingdom of Hungary (then part of the Habsburg Empire).

Luxembourgian[5] and Slovak[7] ancestors. According to another source, he was of Hungarian ethnic origin, but the name "Hadik" is a diminutive from the Slovak appellative had 'snake', the family was thus of Slovak extraction.[8] Alternative theories also suggest his Tartar or Cherkess ancestry.[9]

His father, Mihály Hadik was a cavalryman. His mother, Franciska Hardy had a German background.[5] Andras Hadik volunteered for the Ghilányi Hussar regiment when he was 20, and at 22 he was given the rank of officer and became the standard bearer in the Dessewffy Hussar regiment in the Habsburg army. Hadik fought in the War of the Polish Succession (1733 – 1738) and the Austro-Turkish War, 1737-1739. In 1738 Hadik was promoted to the rank of captain.

During the War of the Austrian Succession (1740 – 1748) he gained fame for his actions against the Prussians at the city of Neisse (Nysa, now Poland) using surprise attacks and tricks under the unwritten laws of the so-called "small war," relying on the excellent training of his light cavalry hussars. During the war he served under Prince Charles Alexander of Lorraine and was promoted to the rank of Lieutenant-Colonel. In 1744 he gained the rank of Commanding Colonel of his own hussar regiment, then near the end of the war in 1747 he attained the rank of General and was appointed commander of a cavalry brigade.

Early in the Seven Years' War (1756 – 1763), Hadik executed the most famous hussar action in history: when the Prussian King Frederick was marching south with his powerful armies, the Hungarian general unexpectedly swung his 5,000 force of mostly hussars around the Prussians and took their capital Berlin. The city was spared for a negotiated ransom of 300,000 thalers,[2] which he distributed among his troops. For this feat, Hadik was promoted to the rank of Field Marshal. He was also awarded the Großkreuz of the Maria Theresia Order.[2]

Nowadays, the Slovak National Academy of Defense is named after him.[citation needed] 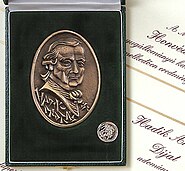