The Alfa Romeo Matta (known officially as the Alfa Romeo 1900M) is a 4x4 off-road vehicle. There were two different versions made, the AR51 and the AR52 (Autovettura da Ricognizione, (Reconnaissance Vehicle or "Scout Car")).[2] The AR51 was produced for the Italian army and the AR52 was the same car, but intended for civilian use. The Matta had a 1884 cc 65 PS (48 kW; 64 hp) twin cam engine with dry sumped lubrication. The Matta was built on a separate chassis which is similar to the setup on most off-road vehicles. 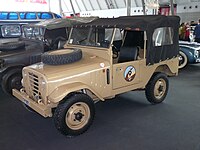