Alexander Gardner (October 17, 1821 – December 10, 1882) was a Scottish photographer who emigrated to the United States in 1856, where he began to work full-time in that profession. He is best known for his photographs of the American Civil War, U.S. President Abraham Lincoln, and the execution of the conspirators to Lincoln's assassination.

Gardner was born in Paisley, Renfrewshire, on 17 October 1821. He became an apprentice jeweller at the age of fourteen, lasting seven years.[4] Gardner had a Church of Scotland upbringing and was influenced by the work of Robert Owen, Welsh socialist and father of the cooperative movement. By adulthood he desired to create a cooperative in the United States that would incorporate socialist values. In 1850, Gardner and others purchased land near Monona, Iowa, for this purpose, but Gardner never lived there, choosing to return to Scotland to raise more money. He stayed there until 1856, becoming owner and editor of the Glasgow Sentinel in 1851. Visiting The Great Exhibition in 1851 in Hyde Park, London, he saw the photography of American Mathew Brady, and thus began his interest in the subject.

Gardner and his family immigrated to the United States in 1856. Finding that many friends and family members at the cooperative he had helped to form were dead or dying of tuberculosis, he stayed in New York. He initiated contact with Brady and came to work for him that year, continuing until 1862. At first, Gardner specialized in making large photographic prints, called Imperial photographs, but as Brady’s eyesight began to fail, Gardner took on increasing responsibilities. In 1858, Brady put him in charge of the Brady's Washington, D.C. gallery.[5]

Abraham Lincoln became the American President in the November 1860 election and along with his election came the threat of war. Gardner, being in Washington, was well-positioned for these events, and his popularity rose as a portrait photographer, capturing the visages of soldiers leaving for war.

Brady had the idea to photograph the Civil War. Gardner's relationship with Allan Pinkerton (who was head of an intelligence operation that would become the Secret Service) was the key to communicating Brady's ideas to Lincoln. Pinkerton recommended Gardner for the position of chief photographer under the jurisdiction of the U.S. Topographical Engineers. Following that short appointment, Gardner became a staff photographer under General George B. McClellan, commander of the Army of the Potomac. At this point, Gardner's management of Brady's gallery ended. The honorary rank of captain was bestowed upon Gardner, and he photographed the Battle of Antietam in September 1862, developing photos in his travelling darkroom.

Gardner has often had his work misattributed to Brady, and despite his considerable output, historians have tended to give Gardner less than full recognition for his documentation of the Civil War.[6] Lincoln dismissed McClellan from command of the Army of the Potomac in November 1862, and Gardner’s role as chief army photographer diminished. About this time, Gardner ended his working relationship with Brady, probably in part because of Brady's practice of attributing his employees' work as "Photographed by Brady".[6] That winter, Gardner followed General Ambrose Burnside, photographing the Battle of Fredericksburg. Next, he followed General Joseph Hooker. In May 1863, Gardner and his brother James opened their own studio in Washington, D.C, hiring many of Brady's former staff. Gardner photographed the Battle of Gettysburg (July 1863) and the Siege of Petersburg (June 1864–April 1865) during this time.

In 1866, Gardner published a two-volume work, Gardner's Photographic Sketch Book of the Civil War. Each volume contained 50 hand-mounted original prints. The book did not sell well.[7] Not all photographs were Gardner's; he credited the negative producer and the positive print printer. As the employer, Gardner owned the work produced, as with any modern-day studio. The sketchbook contained work by Timothy H. O'Sullivan, James F. Gibson, John Reekie, William Pywell, James Gardner (his brother), John Wood, George N. Barnard, David Knox and David Woodbury, among others. Among his photographs of Abraham Lincoln were some considered to be the last to be taken of the President, four days before his assassination, although later this claim was found to be incorrect, while the pictures were actually taken in February 1865, the last one being on the 5th of February.[7][8] Gardner would photograph Lincoln on a total of seven occasions while Lincoln was alive.[7] He also documented Lincoln's funeral, and photographed the conspirators involved (with John Wilkes Booth) in Lincoln's assassination. Gardner was the only photographer allowed at their execution by hanging, photographs of which would later be translated into woodcuts for publication in Harper's Weekly.

After the war, Gardner was commissioned to photograph Native Americans who came to Washington to discuss treaties; and he surveyed the proposed route of the Kansas Pacific railroad to the Pacific Ocean. Many of his photos were stereoscopic. After 1871, Gardner gave up photography and helped to found an insurance company. Gardner stayed in Washington until his death. When asked about his work, he said, "It is designed to speak for itself. As mementos of the fearful struggle through which the country has just passed, it is confidently hoped that it will possess an enduring interest."[9] He became sick in the winter of 1882 and died shortly afterward on December 10, 1882, at his home in Washington, D.C. He was survived by his wife and two children.[1] He was buried in local Glenwood Cemetery.[10]

In 1893, photographer J. Watson Porter, who had worked for Gardner years before, tracked down hundreds of glass negatives made by Gardner, that had been left in an old house in Washington where Gardner had lived. The result was a story in the Washington Post and renewed interest in Gardner's photographs.[11]

A century later, photographic analysis suggested that Gardner had manipulated the setting of at least one of his Civil War photos by moving a soldier's corpse and weapon into more dramatic positions.[12][13] In 1961, Frederic Ray of the Civil War Times magazine compared several of Gardner's Gettysburg photos showing "two" dead Confederate snipers and realized that the same body has been photographed in two separate locations. One of his most famous images, "Home of a Rebel Sharpshooter", has been argued to be a fabrication. This argument, first put forth by William Frassanito in 1975, goes this way: Gardner and his assistants Timothy O'Sullivan and James Gibson had dragged the sniper's body 40 yards into the more photogenic surroundings of the Devil's Den to create a better composition. Though Ray's analysis was that the same body was used in two photographs, Frassanito expanded on this analysis in his 1975 book Gettysburg: A Journey in Time, and acknowledged that the manipulation of photographic settings in the early years of photography was not frowned upon. In 1998 artist James C. Groves produced another analysis which has brought the debate of the "Case of the Moved Body" full circle. Mr. Groves' analysis of the photographic evidence contained in the two photographs and another stereo image contradicts Frassanito's analysis.

The "Gettysburg Portrait", A head-on photograph of Abraham Lincoln taken on November 8, 1863; two weeks before his Gettysburg Address.

Cracked glass portrait of Abraham Lincoln, that was considered to be the last photograph taken of the president before his death. The photo was actually taken in February 1865.<ref name="picturing"> 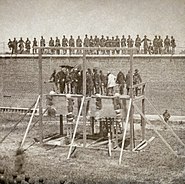