Duke Albrecht was born in Vienna as the eldest child of Duke Philipp of Württemberg[1] and his wife Archduchess Maria Theresa of Austria,[2] daughter of Archduke Albert, Duke of Teschen.

Duke Albrecht was awarded the Pour le Mérite in August 1915 and was promoted to Generalfeldmarschall in August 1916. The newly formed Army Group Albrecht was placed under his commanded in February 1917 and he was responsible for the southern sector of the Western Front until the Armistice.

Duke Albrecht died at Altshausen Castle on October 29, 1939. His son Duke Philipp Albrecht succeeded him as head of the House of Württemberg. 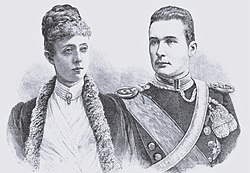 Duke Albrecht was married in Vienna on 24 January 1893 to Archduchess Margarete Sophie of Austria,[3] a daughter of Archduke Carl Ludwig. They had seven children: