The Akizuki-class destroyers (秋月型駆逐艦, Akizuki-gata Kuchikukan?) were one of the primary classes of new destroyers of the Imperial Japanese Navy (IJN) after 1942. The IJN called them Type-B Destroyer (乙型駆逐艦,, Otsu-gata Kuchikukan?) from their plan name. They were designed to fight larger ships, aircraft and submarines.

This is considered to have been the most useful class of destroyers Japan fielded during the war and was well regarded in the IJN.[1] They mounted a 3.9" (100mm) dual-purpose gun in four twin mounts. They also were among the first Japanese vessels equipped with radar. The ships were lighter in their torpedo armament, compared to contemporary destroyers (a single mount of four tubes, plus reloads), but the ships compensated with stronger anti-aircraft armament.

Ships of the Fuyutsuki and Michitsuki subclasses were modified to simplify and speed-up construction.

Project number F51. The Fuyutsuki subclass were originally going to be built to the same specifications as the Akizuki class but construction was more simplified. Four vessels were built under the Maru Kyū Programme (Ship # 361-364). Main differences from the Akizuki class were simplified bow design, removed rear deck house, and fitted two-dimensional air inlet for boilers. However, the IJN was not satisfied with the design. More modifications were ordered, leading to the Michitsuki subclass. 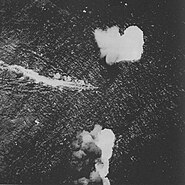 Carrier Zuikaku and four Akizuki-class (Akizuki, Hatsuzuki, Wakatsuki and Shimotsuki) during the Battle of the Philippine Sea on 20 June 1944.

Carrier Zuikaku, Zuihō and Wakatsuki during the Battle of Cape Engaño on 25 October 1944.

Carrier Chitose, battleship Ise and Shimotsuki during the Battle of Cape Engaño on 25 October 1944.

Destroyer Akizuki, Kuwa and battleship Ise during the Battle of Cape Engaño on 25 October 1944. 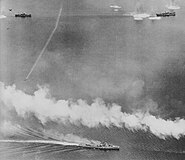 Wakatsuki during the Battle of Ormoc Bay on 11 November 1944.

Battleship Yamato and Fuyutsuki during the Operation Ten-Go on 7 April 1945.

Yoizuki as repatriation transport in 1946.