Military Wiki
Register
Don't have an account?
Sign In
Advertisement
in: Articles containing Turkish-language text, Articles incorporating text from Wikipedia, Military units and formations of the Ottoman Empire,
and 3 more

Akıncı (Turkish language: akıncı, literally, "raider", plural: akıncılar)(Turkish pronunciation: [akɯndʒɯ]) were irregular light cavalry, scout divisions (delil) and advance troops of the Ottoman Empire's military. When the pre-existing Turkish ghazis were incorporated into the Ottoman Empire's military they became known as "akıncı." They were one of the first divisions to face the opposing military and were known for their prowess in battle. Unpaid they lived and operated as raiders on the frontiers of the Ottoman Empire, subsisting totally on plunder.

In battle their main role was to act as advance troops on the front lines and demoralise the marching opposing army by using guerilla tactics, and to put them in a state of confusion and shock.[1] They could be likened to a scythe in a wheat field. They would basically hit the enemy with arrows. When attacked in melee, they would retreat while still shooting backwards. They could easily outrun heavy cavalry because they were lightly armed and their horses were bred for speed as opposed to strength. Akıncı forces carried swords, lances, shields and battle axes as well, so that in a field of combat, they could face the enemy first and fight melee. In some Ottoman campaigns, such as the Battle of Krbava field, Akıncı forces were the only units utilized without any need for Ottoman heavy cavalry or infantry.

Because of their mobility akıncı were also used for reconnaissance and as a vanguard force to terrorize the local population before the advance of the main Ottoman forces. Since they were irregular militia, they were not bound by peace treaties, so they could raid border villages and attack enemy garrisons, fortresses and border posts during peace time, constantly harassing the enemy and checking the weak spots on the rival country's defences. They would also attack trading routes to cut enemy's supply and transportation.

Akıncı forces were led by certain families. Well-known akıncı families were Malkoçoğlu, Turhanlı, Ömerli, Evrenosoğlu, and Mihalli. These akıncı clans were mainly composed of Turkmen tribal warriors with a leading dynasty which descended from the warrior ghazis of the first Ottoman ruler Osman I. Adventurers, soldiers of fortune, mercenaries, warrior dervishes, and civilians looking for fortune and adventure would also join the ranks of akıncı gangs.

Since akıncıs were seen as irregular militia, they did not have regular salaries as kapikulu soldiers, or fiefs like timarli soldiers. Their only income was the plunder and the booties they got from the raids.

Akıncıs used to wear colourful and interesting clothes to shock and confuse their opponents. They used to wear eagle wings on their backs(this tradition was imitated by Polish light cavalry troops later), put on helmets with bull horns, wear coats made of leopard skin. Because of their unusual appearance and their almost suicidally courageous battle tactics, akıncıs were nicknamed by the public as "deliler" (the crazies), and "serdengeçtiler" (headgivers: meaning "the one who has already given his head to enemy", a man who does not care if he lived or died).

Akıncı system had an important role at the establishment of the empire and fast expansion of Ottoman territories in Europe. Though the akıncı system worked excellently from the 14th to 16th centuries, it began to decline after the 16th century. Starting with 16th-17th century nomadic Tatar and Nogay cavalry from the Crimean Khanate also served as akıncıs for the Ottoman Empire. After the Ottoman advance in Europe stopped, akıncı warriors became unnecessary and without the economy of plunder this warrior class slowly faded away. After the modernization of the Ottoman army, the last few officially recognized akıncı clans were abolished. Still, last remnants of akıncı system existed till late 19th century in the Balkan provinces as the bashibozouk (irregular) warriors.

Akıncı lifestyle with battles and plunder was a romantic fantasy for the public and so akıncıs were a popular subject in Ottoman folk literature and music. "Serhad türküleri" or "border folk songs" is a subcategory of Ottoman folk music dealing mostly with akıncı raids and battles or love affairs of akıncı warriors, sometimes odes to fallen warriors. Alişimin Kaşları Kara" (My Aliş had Black Eyebrows), "Estergon Kalası" (Castle of Estergon) are some of the most popular examples. In the modern period, romantic-revivalist Turkish writers also wrote poems about akıncıs. Yahya Kemal's "Akıncılar" is one of the most well-known example on this subject:

"A thousand horsemen raiding, we were joyful like children;

We crossed Danube in procession on a summer day...

One day full galloping on our horses,

We lifted up from earth seven layers to sky...

That crimson vision still trembles in our minds!

A thousand horsemen raiding, we were joyful like children; 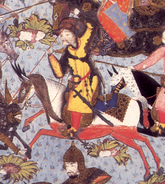