In 2010, responsibility for nuclear-capable assets was transferred to the Air Force Global Strike Command.

As of 2015[update] Air Combat Command consisted of the following units:[1]

Note: On 6 October 2008, it was announced that the Eighth Air Force would become part of the new Air Force Global Strike Command.

Air Combat Command was created 1 June 1992 after the inactivation of the Tactical Air Command (TAC), Strategic Air Command (SAC) and Military Airlift Command (MAC). Upon activation, ACC assumed control of all fighter resources based in the continental United States, all bombers, reconnaissance platforms, battle management resources, and Intercontinental ballistic missiles (ICBMs). Furthermore, ACC had some tankers and C-130s in its composite, reconnaissance, and certain other combat wings. In 1993 control of the ICBM force was transferred to the Air Force Space Command.[4]

Following the inactivation of SAC at Offutt AFB, Nebraska, a new unified command, the United States Strategic Command, was activated at Offutt, created to manage the combined strategic nuclear forces belonging to the Air Force and the Navy.[4]

Historically, combat command was an earlier air unit designation. During 1941 and early 1942, the tactical air units of the War Department, formerly known as the GHQ Air Force, formed the Air Force Combat Command. The AFCC was dissolved in the reorganization of the United States Army, effective 9 March 1942, which created the United States Army Air Forces as a major and semi-independent component.[4]

Not long after activation, ACC underwent organizational and mission changes. The first such major change was the transfer of the combat search and rescue mission (CSAR) from Air Mobility Command to ACC. With the realigning of search and rescue units, ACC gained additional resources, as well as a new mission. The formal transfer took place on 1 February 1993, when the Air Rescue Service (ARS) was assigned to ACC. On 2 July of the same year, the ARS was redesignated the USAF Combat Rescue School and was assigned to the 57th Wing at Nellis AFB, Nevada.[4]

One of the most significant changes for Air Combat Command resulted from an overhaul of flying training responsibilities. Following its activation, ACC was responsible for aircraft-specific aircrew training, including initial weapon system and continuation training. On 1 July 1993, the 58th and 325th Fighter Wings—F-16 and F-15 training units transferred from ACC to Air Education and Training Command (AETC). Concurrently, Luke AFB, Arizona, and Tyndall AFB, Florida, for which those respective wings were the host units, also moved from ACC to AETC ownership. However, on 1 October 2012, both Tyndall AFB and the 325th Fighter Wing returned to the control of ACC.[4]

The next major organizational change resulted from a fine-tuning of aerial refueling and airlift resources. From its activation, Air Combat Command had assumed ownership of some C-130 Hercules theater airlift assets and KC-10 Extender and KC-135 Stratotankers. Just as ownership of overseas C-130 resources had already been transferred to USAFE and PACAF commanders, it was decided that all C-130s based in the CONUS would be under the control of ACC, while at the same time, almost all KC-135 tankers would be assigned to Air Mobility Command.[4]

There was historical precedent for the reassignment of C-130s to Air Combat Command. During the earliest days of Tactical Air Command (TAC), the command had carried out the "tactical" or combat airborne aspect of airlift operations, leaving the "strategic" or logistical mission to Military Air Transport Service (a precursor of AMC). The tactical airlift mission included logistical airlift, airborne operations, aeromedical evacuation, and air support for special operations. This division of the airlift mission continued until 1 December 1974, when TAC transferred its CONUS-based tactical airlift units, including ANG and Reserve units, to Military Airlift Command (MAC). MAC gained the overseas units from theater commands on 31 March 1975.[4]

In Southwest Asia, Air Combat Command provided active duty and reserve component forces for Operations Desert Storm and Southern Watch to deter Iraqi aggression. In October 1994, ACC also demonstrated its ability to react quickly to the buildup of Iraqi troops near the border of Kuwait. In addition, ACC, from its inception, has provided indispensable support to counter-drug operations, including Airborne Warning and Control System (AWACS), reconnaissance and fighter aircraft, as well as radar and connectivity assets.[4]

In keeping with its global responsibilities, ACC initiated a series of "Global Power" missions in 1993. ACC's bomber wings are required to perform out-of-CONUS training flights to demonstrate the capability to perform their "quick reaction" worldwide mission. On one of the global power missions, two B-1 Lancer aircraft of the 28th Bomb Wing, Ellsworth AFB, South Dakota, set a B-1 flying time record on the first leg of their round-the-world flight, 11–13 August 1993. The following year, two B-52s from the 2d Bomb Wing, Barksdale AFB, Louisiana, circumnavigated the globe in 47.2 hours, the longest jet aircraft flight in history.[4]

The task of developing a comprehensive listing of ACC units present in Iraq, Afghanistan and other combat areas is particularly difficult as the events of 11 September 2001 and the Global War on Terrorism has made such an effort significantly difficult. The USAF seeks to improve operational security (OPSEC) and to deceive potential enemies as to the extent of American operations, therefore a listing of which units deploying where and when is unavailable.[4]

However, it is certain that ACC units are actively flying combat missions currently over both Afghanistan and Iraq. 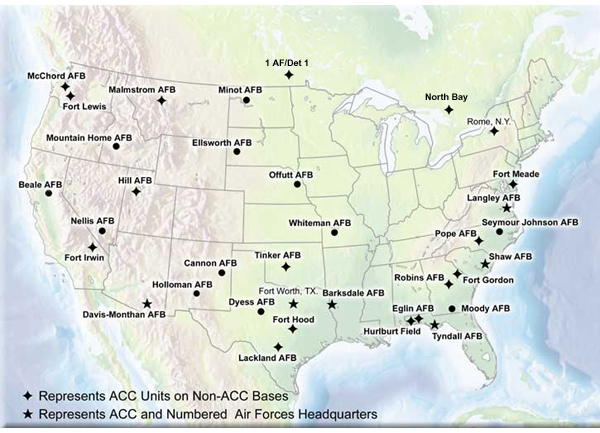