Admiral is one of the highest ranks in some navies, and in many navies is the highest rank. It is usually abbreviated to "Adm" or "ADM". The rank is generally thought to have originated in Sicily from a conflation of Arabic language: أمير البحر‎, amīr al-baḥr, "commander of the sea", with Latin admirabilis[1] ("admirable") or admiratus ("admired"), although alternative etymologies derive the word directly from Latin, or from the Turkish military and naval rank miralay. The French version - "Amiral" without the additional "d" - tends to add evidence for the Arab origin. In the Commonwealth and the U.S., a "full" admiral is equivalent to a "full" general in the army, and is above vice admiral and below admiral of the fleet (or fleet admiral). In NATO, admirals have a rank code of OF-9 as a four-star rank.

The word "admiral" in Middle English comes from Anglo-French amiral, "commander", from Medieval Latin admiralis, admirallus. These themselves come from Arabic "amīr", or amīr al- (أمير الـ), "commander of", as in amīr al-baḥr (أمير البحر), "commander of the sea".[2] The term was in use for the Greco-Arab naval leaders of Norman Sicily, which had formerly been ruled by Arabs, at least by the early 11th century.

The Norman Roger II of Sicily (1095–1154), employed a Greek Christian known as George of Antioch, who previously had served as a naval commander for several North African Muslim rulers. Roger styled George in Abbasid fashion as "Amir of Amirs", i.e. "Commander of Commanders", with the title becoming Latinized in the 13th century as "ammiratus ammiratorum".[3]

The Sicilians and later Genoese took the first two parts of the term and used them as one word, amiral, from their Aragon opponents. The French and Spanish gave their sea commanders similar titles while in Portuguese the word changed to almirante. As the word was used by people speaking Latin or Latin-based languages it gained the "d" and endured a series of different endings and spellings leading to the English spelling "admyrall" in the 14th century and to "admiral" by the 16th century.

The word "admiral" has today come to be almost exclusively associated with the highest naval rank in most of the world's navies, equivalent to the army rank of (full) general. However, this wasn't always the case; for example, in some European countries prior to the end of World War II, admiral was the third highest naval rank after general admiral and grand admiral.

The rank of admiral has also been subdivided into various grades, several of which are historically extinct while others remain in use in most present day navies. The Royal Navy used colours (red, white, and blue, in descending order) to indicate seniority of its admirals until 1864; for example, Horatio Nelson's highest rank was vice admiral of the white. The generic term for these naval equivalents of army generals is flag officer. Some navies have also used army-type titles for them, such as the Cromwellian "general at sea". 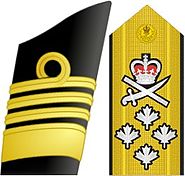 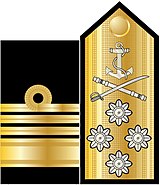 In Canada (more specifically at Camp Minogami), an Admiral is a really Gros Gars (bench presses 200 eazzy) that doesn't take any orders from the Animateurs (especially not the Anim Commando), and who is considered as one of the Plus Beau Gosse on camp. He is usually plein aux As and wears some Supreme gear all day. Word is he loves Werner Paddles almost as much as he loves his boyzzz

Admiral is a German Navy OF-9 four-star flag officer rank, equivalent to the German Army and German Air Force rank of General.

Post-WWII rank is Bakurocho taru kaishō or Admiral serve as Chief of Staff, Joint Staff（幕僚長たる海将） with limited function as an advisory staff to Minister of Defense (Japan), compared to Gensui (Imperial Japanese Navy) during 1872–1873 and 1898–1945,.

Admiral of Castile was a post with a long and important history in Spain.